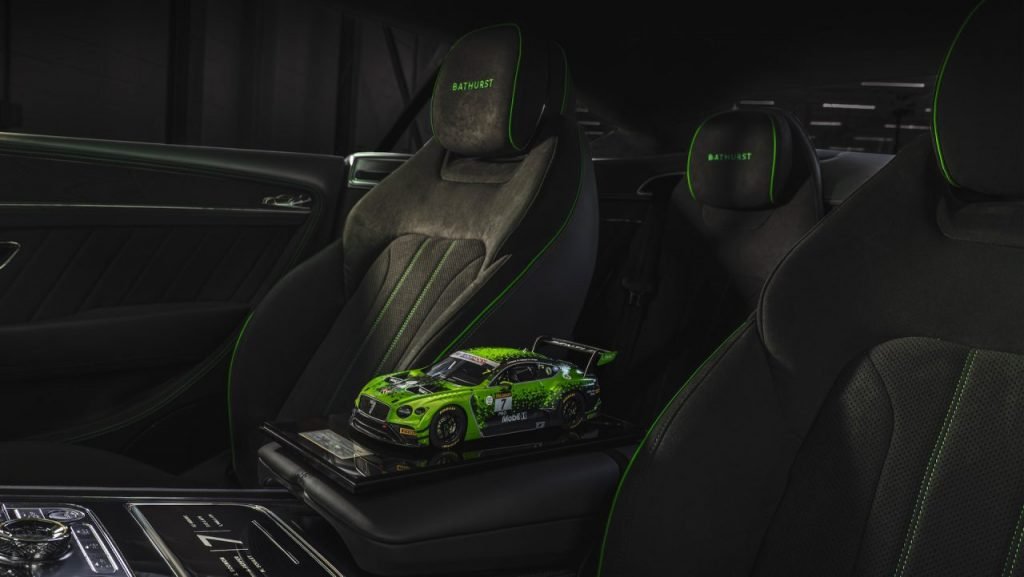 Bentley is celebrating its success at Australia’s Bathurst 12 Hour race with not one, but two special editions, both offered only in Australia.

Designed by the automaker’s Mulliner personalization division and dealership Bentley Sydney, the two cars are based on the Continental GT S coupe, which just launched in Australia, but with styling elements inspired by the number 7 Continental GT3 race car that finished first at the 2020 Bathurst 12 Hour.

The first car has an Apple Green exterior matching the paint color of the race car, with a Beluga (black) roof, exterior mirrors, and lower bumper and trunk-lid trim. It also has the Blackline Specification, which blackens the exterior chrome trim, and the Styling Specification, which nets a carbon-fiber front splitter, side skirts, and rear diffuser. Like the Bathurst-winning Continental GT3, the racing number 7 is painted in the grille.

This car’s interior replicates the exterior color palette with black upholstery and green piping, contrast stitching, and trim. “Bathurst” is stitched into the headrests, while the kick plates read “one of two.” A metal overlay of the Mount Panorama track where the Bathurst 12 Hour is held is affixed to a carbon-fiber dashboard fascia, while the names of the victorious drivers and the number 7 are located on the center console.

The second car is painted in Silver Tempest, referencing the launch color of the second-generation Continental GT3 at its 2017 reveal. This is the version of the race car that went on to win the Bathurst 12 Hour in 2020. The second car is otherwise identical to the first. A 1:18 scale model of the race-winning car will be included with each of them.

Both cars are based on the Continental GT S, which was introduced in June 2022 as one of a growing number of S models aiming to add a sportier character to Bentley’s base V-8 models.

Output from the 4.0-liter twin-turbo V-8 is unchanged at 542 hp and 568 lb-ft of torque, good for a factory-estimated 0-62 mph time of 4.0 seconds, but S models also get a sport exhaust system and the normally optional Bentley Dynamic Ride system to improve handling.

Special commissions like the pair of Bathurst cars are becoming a bigger part of Bentley’s business. The automaker said its Mulliner division completed 500 vehicles in 2022. Initially focused on one-offs and special requests, Mulliner’s milieu now also includes limited editions like the Bentley Batur coupe, as well as the Blower continuation cars.