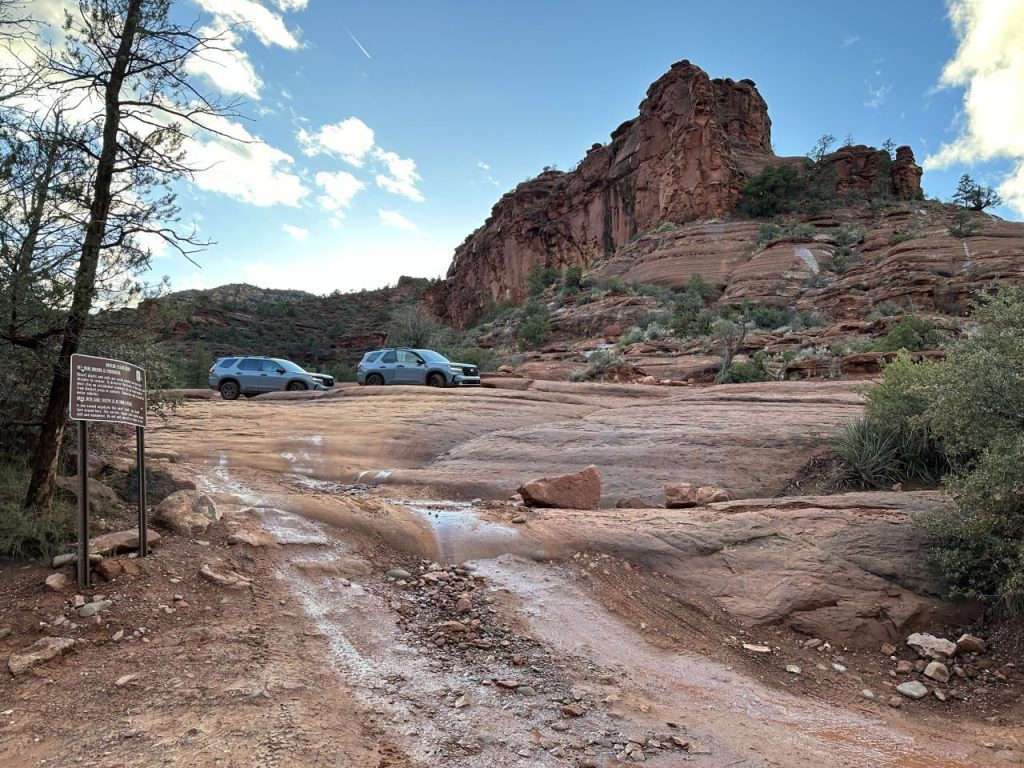 For a $75 ticket price, visitors to the Sedona, Arizona area can sign up for a Jeep tour to get up-close and personal with the picturesque countryside. Most outfitters provide passengers with an open-air, bumpy jump-seat introduction to the wilderness – with dust, mud, and weather conditions included at no extra charge!

While Sedona’s 3.3-mile round-trip drive on Broken Arrow Trail to the “Chicken Point” Lookout is relatively short in length, it is one of the more technical stretches of road in Sedona for off-road enthusiasts. In fact, the trail’s entry point has a rock obstacle that locals called the “Gatekeeper.” It serves as a deterrent for people who do not have the driving skill level – or the automotive equipment – to continue and traverse the pass safely.

Recently, Honda hosted a handful of journalists in Sedona for the press launch of the all-new fourth-generation Honda Pilot three-row crossover, and I was among the lucky attendees to be part of it. I saddled up in the driver seat of a Pilot TrailSport with Honda development team member Jed Aston at my side in the passenger seat. He coached me on the ins and outs of not only my off-roading strategy, but also the merits of the vehicle that he and his team have been invested in for the last five years.

Based on my experience conquering Broken Arrow: Jed and his teammates nailed it.

The Pilot is now 20 years old which oddly enough means the oldest generation is approaching classic status. First launched in 2003, this three-row, midsize crossover has been a hit for the Honda brand, selling over 100,000 units per year consistently for over the past decade. As Honda’s largest sport-utility vehicle, the Pilot developed a reputation for its versatile cargo-carrying capacity, smooth ride, and multi-terrain qualifications.

Each generation has evolved in size, equipment, and capability in the two decades that followed, with the second generation launching in 2009 and the third generation 2016. Exterior lines became sleeker as the years went on, with the third-generation achieving a ten percent reduction in drag compared to the prior version. Along with the design revisions, technology and powertrains received similar attention: In 2017, all trims except for LX received Apple CarPlay and Android Auto. And in 2021, a new nine-speed transmission became standard across the board.

To some folks, the Pilot drifted away from its go-anywhere objective, since design aesthetic used softer lines and the underpinnings were primarily street-focused. Engineers set out to change that direction for 2023.

The fourth-generation Pilot was first revealed in November 2022 and went into production the following month at Honda’s Lincoln, Alabama manufacturing facility. Designers set out to create a more capable Pilot no matter the terrain. With that in mind, the length, wheelbase, and track width were increased. The hood was lengthened, and the side profile received a strong horizontal beltline. Following are some specifics on the features Honda updated.

Honda resurrected some fan favorites to the equipment list, including a shallow parcel shelf on the passenger side of the dashboard for smaller items. The lower tray in the center console can accommodate two smartphones side by side, too. Design team representatives joked, “We all know what that feels like to lose a cell phone between the seat and the center console, so why not build a place to put it?”

I did not get the chance to put the second or third rows to the test, but that is one area where the new Pilot shines. In a class-exclusive feature, on most Pilot trim levels, the center seat in the second row is removable and can be stowed in a cargo tray at the rear of the vehicle. This reminded me of the first-generation CR-V which offered a folding picnic table in the same area – a typical display Honda innovation and space-efficiency.

Under the hood resides a 3.5-liter J-Series V6 with output of 285 horsepower and 262 lb-ft of torque — a five-horsepower bump from the previous model. Torque is transferred to all four corners through a 10-speed automatic transmission (incidentally, that is double the number of gears that propelled the first-generation Pilot). Honda’s i-VTM4 all-wheel drive system (a first for the Pilot) detects and corrects wheel spin. Honda did not make mention of any upcoming hybrid or EV Pilot variants, and fuel economy is rated at 20 miles per gallon combined city/highway.

In typical Honda fashion, there are a variety of trim levels available on the new Pilot: LX, Sport, TrailSport, EX-L, Touring, and Elite. Pricing points range from $35,950 to $52,030.

Now the important part: How’s the drive? The terrain around Sedona was the perfect proving ground for our evaluation, as we set out to explore the region on pre-determined routes.

The first half of my day took place in on-road driving environments, where I had the opportunity to sample TrailSport and Elite models in a roughly 50-mile loop near the Prescott National Forest and Highway 89A. The Pilot is as predictable and confidence-inspiring as an everyday passenger car, even with its higher clearance and cargo versatility. The 3.5-liter V6 provided good punch without being intrusive in noise or harshness. I enjoyed opening the panoramic roof, which Honda pointed out is a class-exclusive feature for an eight-passenger vehicle.

The Sedona area had seen rain and snow in the days leading up to the event, so the back roads were slick. In fact, Broken Arrow Trail was closed in the early morning hours to allow the frost to melt, but I got to experience it later in the day in a TrailSport model.

My takeaway of the experience was just how easy the Pilot made things. The “point and shoot” confidence made for an impressive feeling, especially since I had heard from Jeep-owning friends how technical the trail could be. Some sections of the road were narrow, so Jed and I used the sideview and bird’s eye camera angles on the “TrailWatch” system to get a better look at our surroundings on the nine-inch touchscreen monitor.

We were also able to put the new Hill Descent Control feature to a test. It holds a constant low speed and manipulates the brake and accelerator to minimize slip. There were times when particularly rugged terrain brushed the underside. “It’s designed for that,” Jed said. The skid plates are engineered to take the entire weight of the vehicle upon impact – that’s how durable they are. I found the turning radius, ride, and traction-control systems to be well optimized for the climb. The stunning view at the summit was a crowning reward for the engineering team who worked hard to refine this vehicle for precisely these types of adventures.

If history holds true, Honda will have a hit on its hands with this latest version of the popular Pilot. It’s a gateway to adventure in the outdoors – not to mention it offers a lot more creature comforts than a foam jump-seat in a Jeep tour convoy. As we passed each Jeep group on the trail from the comfort of our smooth ride, heated seats, heated steering wheel, and modern conveniences, I tried to keep my sly grin to myself. The Pilot is just that good.

Stay tuned to more on the ClassicCars.com Journal about the upcoming Pilot and other models.