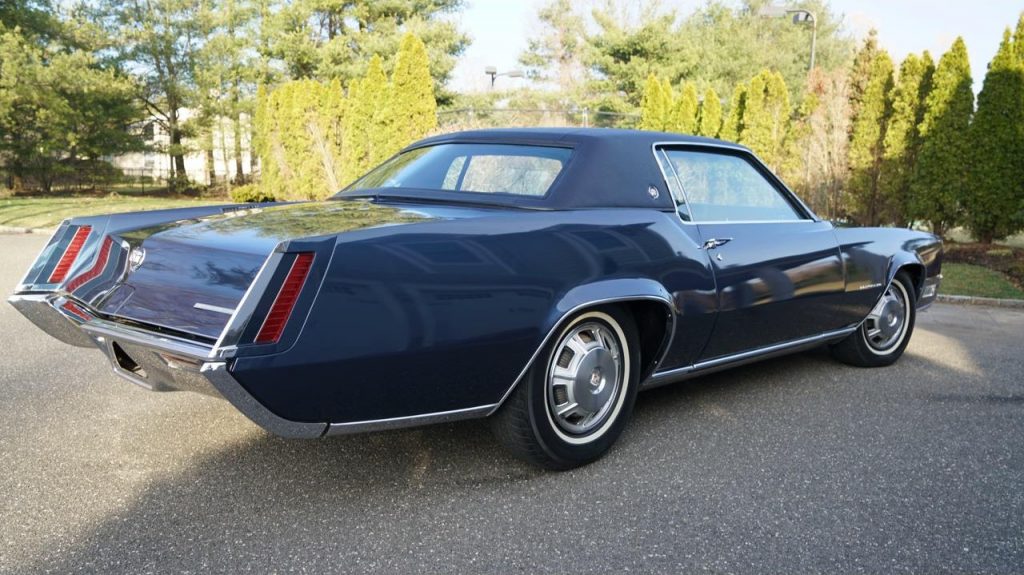 Just when you thought General Motors had peaked with the Buick Riviera, along came Oldsmobile in 1966 with the Toronado, a new personal-luxury coupe that also featured front-wheel drive and concept car styling. And then, the following year, Cadillac introduced the Fleetwood Eldorado, a front-wheel drive personal-luxury coupe with sporty-yet-formal styling. Our Pick of the Day is a low-mileage example of the 1967 Cadillac Fleetwood Eldorado listed for sale on ClassicCars.com by a dealership in Long Island, New York.

Before 1967, the Fleetwood Eldorado was the sportiest of full-size Cadillacs in the upscale Fleetwood sub-series. As the 1960s progressed, the exclusivity of the Eldorado seemed to be lost, but the all-new 1967 model rectified this to the nth degree. Though the 340-horsepower 429 V8 was conventional Cadillac fare, the combination of the engine with the Toronado’s Turbo-Hydramatic 425 made for a unified powertrain package not seen on rear-wheel drive GM products save the Corvair.

Standard for the $6,277 Fleetwood Eldorado was Darien cloth and vinyl Strato bench (with armrest), one of eighteen different interior selections that also included Dalmatian (houndstooth) cloth Strato bench and perforated leather Strato bench; leather contoured bucket seats with console were also available. The unique padded dashboard would be mainstreamed into the rest of GM’s portfolio by 1969. Outside, hidden headlights, clever, subtle taillights and cornering lights distinguished the Fleetwood Eldorado from every other car on the road.

The seller of this 1967 Fleetwood Eldorado claims this example is one of 43 built with leather buckets. There’s no online database to prove or disprove this but, considering the number of combinations available for the Eldorado, there’s a good chance of many being uncommon. As an all numbers-matching vehicle, “this Fleetwood Eldorado hardtop coupe is in exceptional condition from top to bottom … the body panels, interior, chrome, trim and undercarriage are all original,” adds the seller. “Chrome and trim are like new, [and] it has never been in an accident and never seen rust.” As a documented two-owner California car, this Eldorado comes with GM Heritage paperwork, fuel logs, receipts, previous California title, copy of the owner’s manual and more. It has been repainted in its original Atlantis Blue Firemist, one of those optional ($132) hues available with the bigger metalflake.

The 1967 Fleetwood Eldorado was part of a troika of GM models that featured styling as good as anything that had come from the company, though they all tend to be quite affordable compared to contemporaries like the GTO and Camaro. As such, the asking price seems a bit rich at $62,900, but with only 24,250 miles, where are you going to find another one with the bucket seats, Firemist paint and low mileage?