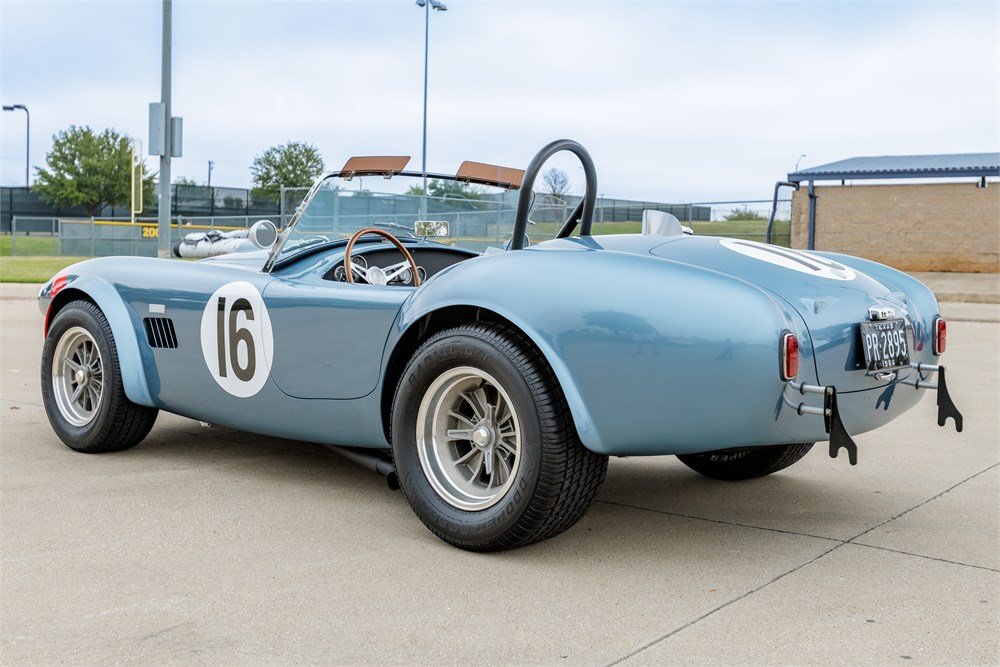 Featured on AutoHunter, the online auction platform driven by ClassicCars.com, is this 1964 Shelby Cobra 289 FIA 50th Anniversary Edition. It is an authentic “continuation car” built by Shelby American in 2014 of the Shelby Cobra 289 racer campaigned in the 1960s, and it is number 16 of 50 marking 50 years of the FIA Cobra. This Cobra is powered by an all-aluminum Shelby 347 V8 stroker now measuring 363ci, with shifting handled by a TREMEC five-speed manual. Finished in Viking Blue with red striping over a black leather interior, this Shelby Cobra continuation model is offered by the selling dealer with build documentation, a Manufacturer Statement of Origin (MSO) and a Shelby-branded car cover.

The hand-laid fiberglass body is coated in Viking Blue with a wide, banner-like red stripe on the nose. Additional exterior features include a hood scoop, side mirrors, driver’s side roll hoop, Arctic White roundels with the number 16, 50th Anniversary badging above the front fender vents, and side-exit exhaust pipes.

Aluminum Halibrand-style 15-inch wheels with spinner caps are wrapped in Cooper Cobra Radial G/T tires, 235/60 up front and 295/50 out back.

The Stewart Warner instrumentation includes a 160-mph speedometer, 8K-rpm tachometer, and gauges for the oil pressure, coolant temperature, oil temperature and fuel level. The mechanical odometer reads 115 miles, reflective of the mileage accrued since this car was assembled.

The all-aluminum Shelby 289ci V8 block has been bored and stroked to displace 363ci. Features include fuel injection with simulated velocity stacks, and an aluminum radiator. A TREMEC five-speed manual transmission and Salisbury limited-slip differential with 3.73 gears lay that Blue Oval goodness on the pavement.

The chassis uses a three-inch-diameter steel frame with front and rear independent suspension. Dual-piston Shelby-branded calipers help bring the Cobra’s velocity down to a stop. Additional photos showing the underside are posted on the auction page.

Visit the AutoHunter listing for more information and photo gallery