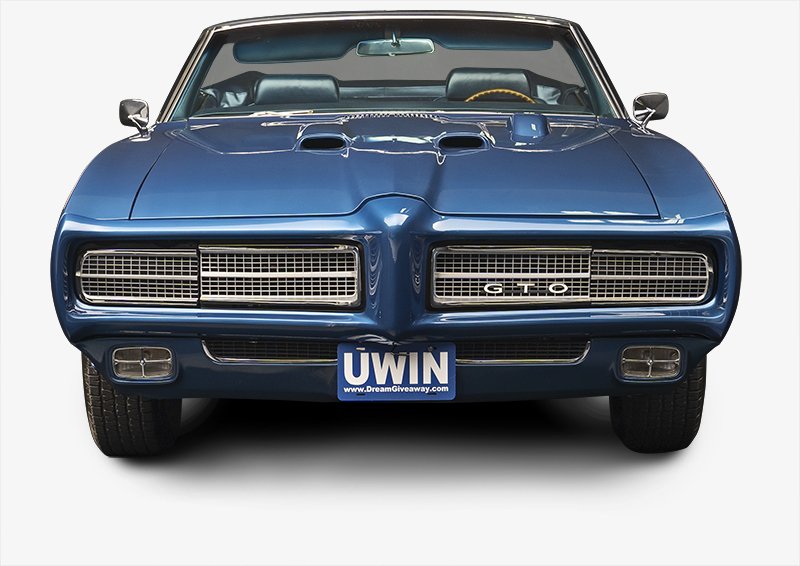 For many muscle-car fans, there’s no finer example from Pontiac’s classic line-up than the 1969 GTO. The second-generation Gran Turismo Omologato (1968-1972) is on many folks’ wish lists for its legendary performance, good looks and timeless Pontiac styling.

After coming off the win for Motor Trend’s Car of the Year in 1968, Pontiac’s stylists improved the GTO’s looks subtly for the 1969 model year. Aesthetic revisions included the deletion of the side vent windows, a mesh-look revamp to the front grille, red rear-quarter side-marker lights shaped like Pontiac arrowheads, and new front-parking-light, rear-taillight and rear-chrome-bumper designs. Inside, the gauges changed from blue to black.

Despite the ooh la la in the looks department, sales were down from the previous year’s tally of 87,684 GTOs sold.

So, when the Dream Giveaway Garage asked us if our readers’ hearts would go thumpity-thump over a Ram Air 1969 GTO convertible, well, you already know the answer.

Who wouldn’t want to win a Judge in sheep’s clothing?

A quick review of the invoice graciously provided by PHS confirms a Ram Air III under the hood. Continuing down the line, the two additional performance options most collectors ooh and aah over are present as well: a four-speed manual stick and a heavy-duty Safe-T-Track differential.

If putting this cool classic GTO convertible in your driveway sounds good to you, then click here and enter now.

Let’s get back to the details of how you can win this GTO.

Make a donation of $25 or more to help out charity and, if you’re lucky, you could find this primo example of America’s original super-car staring back at you from its new permanent home in your garage. Click here and enter now.

Entry banks close at midnight on January 30, 2023. Click here to get double tickets on your donation of $25 or more. The winner will be drawn on February 9, 2023, and the awarding of the keys, the title and the GTO will occur in late February or early March of this year. Plus, there’s $15,000 set aside to pay the federal government the prize tax on behalf of the winner. This is your last chance to win this rare Pontiac GTO. Enter now