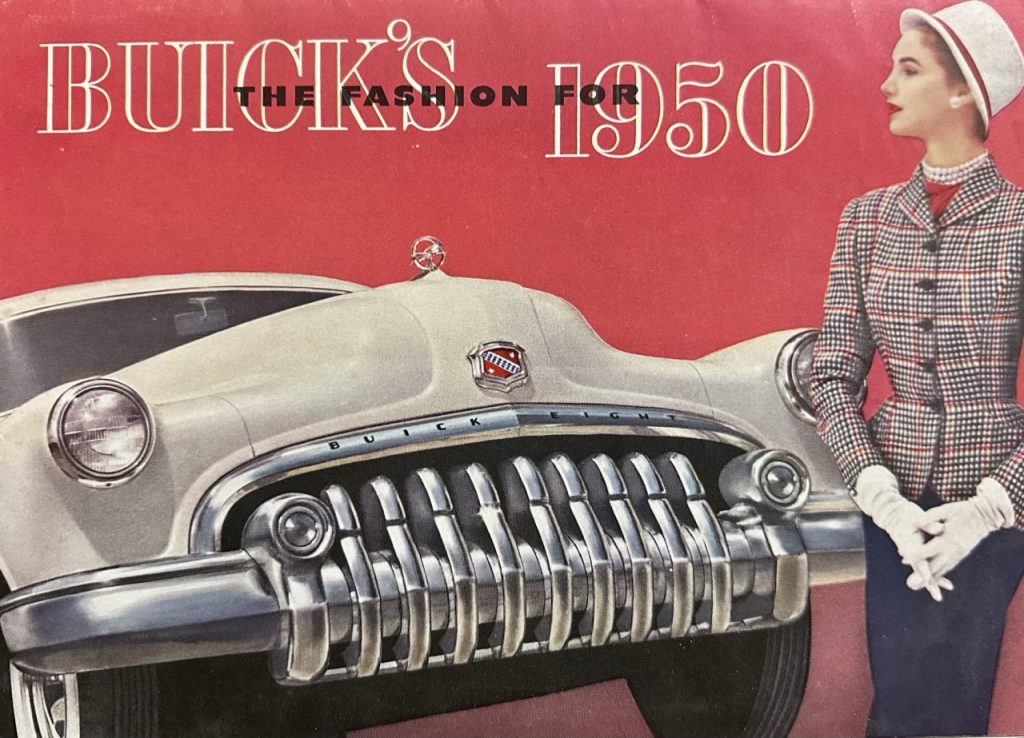 Continuing the theme of “family car history,” today we take a closer look at my grandpa’s 1950 Buick Special. At 73 years old, this car’s design still conveys beauty, style, and class. Some of the artifacts I hold most dear in my photo archives are a handful of shots of this gorgeous Special, so let’s discuss the story behind it.

The Special took a spot on the lower end of the Buick hierarchy. Its name first originated in 1936 as a designation of the Series 40. The decade that followed brought changes in design, trim, and powertrains.

Production of full-size 1950 Buick models began in mid-1949 with assembly in various body styles including coupes, sedans, convertibles, and station wagons – all of which rode on the General Motors B-body platform. Buicks were ranked according to price point and option packaging: the Series 40 was the Special, the Series 50 was the Super, and the Series 70 was the luxurious Roadmaster.

A spiral-bound book called “The Facts for 50” contains training materials for salesmen. An introductory message from the General Sales Manager reads, “This year it’s more evident than at any other time I can remember that people realize it’s smart to buy Buick – that in Buick, they get more style, more sturdiness, more economical power, more car for the money than in any other make. They know it isn’t only smartly fashionable to own a Buick car, they also know it makes good sense – in the value they get and in the high resale figure they command at trade-in time.”

Later, the author provided a bullet-point list that illustrated the 17 key updates for 1950:

Powering this big sedan was an 248cid valve-in-head Fireball inline-eight engine. An available F-263 raised displacement to 263cid for select models. One of the innovative selling features across the model lineup was the car’s available automatic transmission, which was called Dynaflow Drive. Dynaflow engineering consisted of a hydraulic torque converter with emergency low and reverse planetary gears.

Buick advertising emphasized the style and utility of its grille. I talked a little about that in a Pick of the Day in August. Each of the nine chrome pieces that extended over the front bumper were individually replaceable.

A redesign in 1951 reworked various aspects of the exterior including that striking grille, unfortunately. The Special name was phased out entirely after 1969 and was succeeded by the LeSabre in the full-size segment and the Skylark in the mid-size segment.

My grandpa’s pride and joy was a “Model 43D” – which meant that it was a four-door, six-passenger deluxe jetback sedan. The “jetback” name was in reference to the car’s sloping, fastback-style rear end as opposed to a squared-off or formal traditional sedan look. There were eight available colors, and grandma seems to recall grandpa’s car being blue, so that means it was probably Olympic Blue based on the brochure color palette.

Grandpa’s car was outfitted in lots of brightwork and accessories. Among them, there were triple stars affixed to each rear fender skirt, dual spotlights up front, chrome window visors, and generous side moldings.

At ages 23 and 24 respectively, my newlywed grandparents Rex and Marilyn set out from Logan, Utah in the Special and made their way toward Las Vegas, Nevada for their wedding honeymoon in 1954. The 500-mile one-way drive takes about seven hours today, but back in 1954, travel moved at a slower pace. They would have had to use highways 89 and 91 for the entire length of the trip, which ran through a lot of small Utah towns along the way.

Some of the trip photos show the car at the Arizona-Nevada state line. The northwest corner of Arizona contains a short stretch of road near Mesquite, Nevada on Highway 91 that would have been the location for both of these shots. Today, Interstate 15 passes near the same location.

We don’t know the current location or state of grandpa’s Special if it even exists. Grandpa Rex passed away in 1989 when I was only seven years old, so I never got the chance to chat with him about that. For now, the closest I’ve been to owning a Special is finding this diecast scale model version.