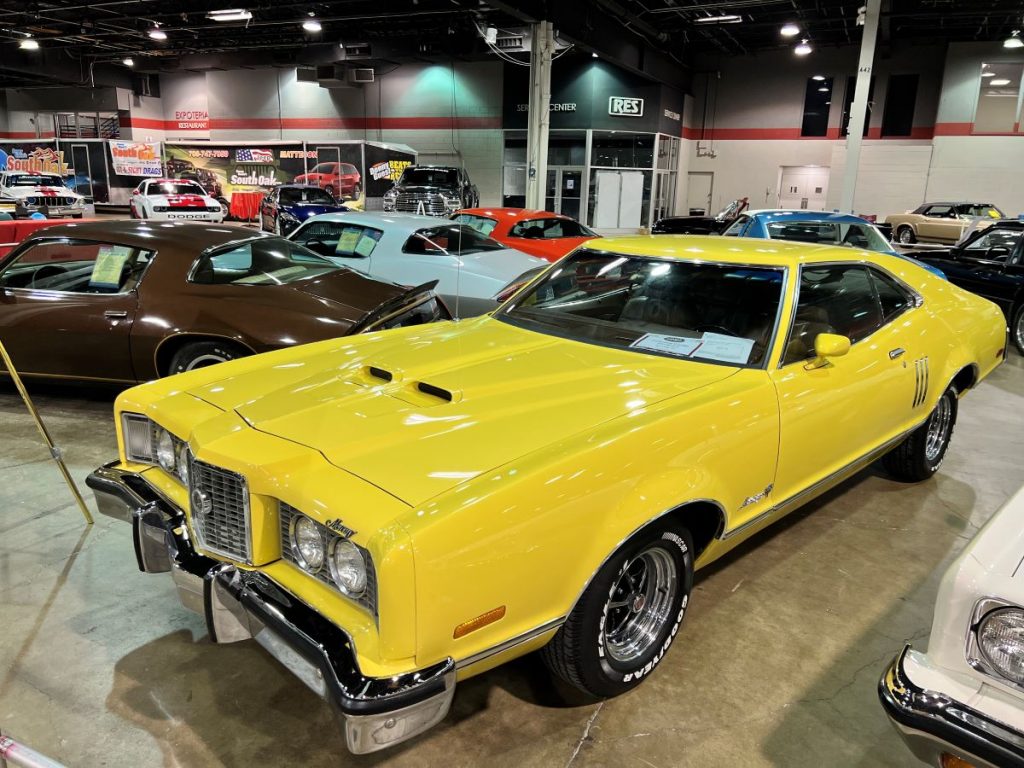 When did the Muscle Car Era die? Some say 1972, the first year of low-compression cars. Others say 1974, the final year of Pontiac’s Super Duty 455. Either way, manufacturers were getting out of high performance.

Automotive journalists Murilee Martin coined the automotive term “malaise” to reflect any car built from 1973-83, a dark time when government regulations contributed to a decline of horsepower, ungainly safety bumpers and reliability. Things started to look up starting in 1983 with strong competition between the Mustang and Camaro. Other cars followed suit, especially thanks to the wonders of the computer and fuel injection.

So, what happened during those lean years? Manufacturers continued to produce high-performance cars, if not cars giving the impression of the glory years of horsepower. Sometimes stripes were the only indication there was a nod towards the glory years, while other times there was an attempt to create a performance car that delivered the goods for the era. At the Malaise Era Muscle display at the Muscle Car and Corvette Nationals, it was all good, showing a fine cross-section of the cars that once were reviled.

The Pontiac LeMans GT can find its origins in the 1970½ GT-37, a car that served the dual purpose of being an insurance-friendly sporty car and competitor to the Plymouth Road Runner. In 1972, it became the LeMans GT and was produced through 1977, though now it was mainly a sporty car with mag wheels and decals, with the GTO featuring a more substantial standard engine (400) and NACA ducts on the hood. This 1973 plays the part well.

Compare the above to this 1973 Grand Am, which had Pontiac going for a more Euro-style vehicle. Interestingly, the Grand Am and not the GTO received the Endura nose, which didn’t help the GTO’s image as it limped towards obscurity.

In 1977, Pontiac built the Can Am, a Trans Am-inspired LeMans with a 400 four-barrel (403 for cars sold in California), Shaker hood, stripes and spoilers. However, the spoiler stamping machine broke in the middle of production, so only 1,133-1,377 were built, depending on what you read.

In 1974, the GTO moved up to the compact Ventura platform. Though maligned for years, these cars have started to garner attention from enthusiasts. And, thanks to its size, the 200-horsepower 350 (a Pontiac design) actually made for a decent performer.

The last year for the Buick Gran Sport was 1975, though by then it was just an appearance and handling package, only available with a 3.8-liter V6 or 350 V8. More interesting was the Century “Free Spirit” Indy Pace Car, which looked the part and included GR70x15 radials and heavy-duty suspension, though it was only available with 350s (the actual pace car used a 455). Note the T-tops.

The Century was chosen again to pace Indy in 1976 though, this time, the actual pace car used a 306-horsepower turbo V6. A production version of the turbo-six was introduced in 1978, but it wasn’t available for the Century until 1979. This 1979 Century Sport Coupe came standard with spoiler, Designer Sport wheels, P205/70R-14 tires, special black accents, sport mirrors, and Rallye ride and handling package, but the original owner also ordered it with the Turbo Coupe package. Aside of the 175-horsepower turbo V6, the package included dual exhausts, automatic transmission, power brakes, Turbine wheels and Turbo Coupe identification.

Just like Pontiac took a LeMans and made the Grand Am, Chevrolet took a Chevelle and made the Laguna S-3. Why S-3? Even the Tootsie Pop owl doesn’t know, but the Laguna was a popular presence in NASCAR and on the streets, though its popularity fell after 1973. The 454 was still available but was asthmatic, lacking the performance chops of similar cars. This 1975 example is one of 7,788 built.

Oldsmobile was still producing the 4-4-2 and Hurst/Olds in 1975, though the latter is what you generally see at shows these days. There were two versions — W-25 and W-30 — with the distinction between the two being a 350 or 455 V8, respectively. As before, the Hurst/Olds was available in black/gold or white/gold.

Yes, the Plymouth Road Runner was still around in 1975. The svelte 1971-74 B-body was redesigned and renamed Fury, with the Road Runner playing the performance role. Standard was a 318 V8 but options up to 400ci were available, just like old times. “Up-and-over” striping coming from the C-pillar and decklid were standard, with a “Performance Hood Treatment” black-out and “tunnel” decklid graphics being optional. The four-speed manual was missing from the options list for the first time.

The Z28 returned midyear 1977 after being gone for 1975-76, now its own model versus a performance package. It was powered by a 350 with 185 horsepower (175 for California). A groovy stripe package was available in several color combos to match the available hues. All of these Z28s have ultra-low mileage: the Red has 163 miles, the Silver 457 miles and the Brown a bit over 4,000 miles.

If the Satellite becoming a Fury seemed weird (see Road Runner, above), Dodge too was not above some confusing tomfoolery as the 1971-74 Charger two-door joined the Coronet series for 1975, then became the Charger and Charger Sport for 1976. There was another Charger in 1975 — the Charger SE — that was essentially a Chrysler Cordoba clone (and likely the one with which you’re most familiar). The 1977 Charger SE shown here features optional longitudinal and hood stripes. A companion to the Charger SE was the 1975-77 Charger Daytona with a fancy (gaudy?) paint job.

The Dodge Magnum was introduced in 1978 as a companion to the Charger, eventually usurping it for 1979. The Magnum was Dodge’s NASCAR entry during these years, available as XE and GT models, with Dodge emphasizing the “Grand Touring” aspect of the latter. Top engine in 1978 was the 400, while the 360 was as good as it got the following year. Note the T-tops on this 1978 Magnum GT.

For 1980, the Dodge Magnum was gone, replaced by the Mirada. As such, Dodge product planners played around with the idea of a Mirada-based Magnum concept car to continue the sporty vibes in the personal-luxury segment. This concept, which is believed to have been built by Creative Industries, features a 318 V8, custom interior and plates hiding the headlight/parking lights.

The Ford LTD II replaced the Torino in 1977, somewhat appearing out of place while GM was downsizing the following year. Through 1979, the LTD II offered a Sports Appearance Package for two-door hardtops that included a wide tri-color longitudinal tape stripe plus another one that wrapped up the C-pillar and over the roof. Also included were Magnum 500 wheels and white-letter radials. There were no performance options, with a 302, 351 or 400 (all two-barrels) being the only choices.

Plymouth and Dodge offered the Volare Road Runner and Dodge Aspen R/T, respectively, since 1976, but in 1978 both introduced similar models called the Super Coupe, yet they subtly differentiated themselves if you look at them side by side. The Plymouth version was painted in Crimson Sunfire metallic while the Dodge version was painted in Sable Tan Sunfire metallic. Both featured a 175-horsepower 360 four-barrel and automatic matte black accents, multi-color stripes, front air dam, rear spoiler, side louvers, fender flares and special GT road wheels.

Remember the Oldsmobile Starfire? The Vega-based coupe was available with a host of engine options from an inline four to a Chevy 305 V8. For 1978, you could opt for the midyear Firenza package, which included an air dam up front, function spoiler out back, stripes along the side and special suspension. The Firenza package was available through 1980.

The Mustang II was a sales success when introduced for the 1974 model year. A 302 V8 eventually joined the options list, which made it a decent performer for the era, much like a 305 Starfire above, but it clearly wasn’t the 1960s. In its final year, Ford offered the King Cobra package for the Mustang II 2+2, which included a standard two-barrel 302 with four-speed, unique tape treatment, distinctive hood scoop, color-keyed sport mirrors, front air dam and rear spoiler, Rallye Package (upgraded suspension) and more. Only 4,971 were built.

The all-new 1979 Mustang was chosen to be the Indy Pace Car that year. It was available with a 140-horsepower 5.0 V8 or a 131-horsepower 2.3-liter turbo-four. Pace car production was prodigious at 10,478, with 5,970 featuring the turbo engine, which was only available with a four-speed.

Here’s another Trans Am, this one a 1980, which was the first year for the turbo 301 V8. With 210 horsepower, it was a modern substitute for the 400 (which had been dropped), though Pontiac enthusiasts today don’t quite feel the same way. The automatic was the only transmission available — in fact, no manual transmission was available for any Firebird engine.

Yes, the Avanti II was still being built in 1983, though the folks that bought the dies from Studebaker were no longer the owners. The new owner implemented modern touches like halogen headlights and parking lights on the monochromatic bumper, which was its first facelift since 1965. Power continued to come from a small-block Chevy, in this case a 305. Only 25 anniversary cars like this were built.

Compare the above to this 1985 Olds FE3-X concept, which was used as a testbed for future performance features. Built by Cars & Concepts, the Olds featured a 200-horse 307, five-speed manual, custom exhaust, functional ground effects, BFGoodrich T/A P245/50/R16 tires, bigger brakes and more.  From articles of the period, it was said this Cutlass could out-corner a Corvette thanks to the FE3 suspension.

One of the more interesting cars of the 1980s was the Mustang SVO, a special model featuring a hopped-up turbo-four and several styling tricks including unique front fascia and dual rear spoilers. Sales were never great considering the more powerful Mustang GT with the 5.0 V8 was faster and cheaper, but they are neat in so many ways. Midyear 1985 brought flush composite headlights and a bump to 205 horsepower, with this configuration continuing into 1986. From 1984-86, only 9,844 SVOs were built.

Though outside of the Malaise Era segment, it would not be unfair to include cars like the Buick Grand National, which could be considered the big Kahuna of the era because it brought 1960s performance in a similar package … except that it used a turbo-six instead of a V8. The hot years were 1986-87, with the engine available on other Regal models like the T-Type. The white car to the left is a stock 1987 T-Type, while the one on the right had all the special Grand National bits installed right after the original owner bought it because he didn’t want a black Grand National.