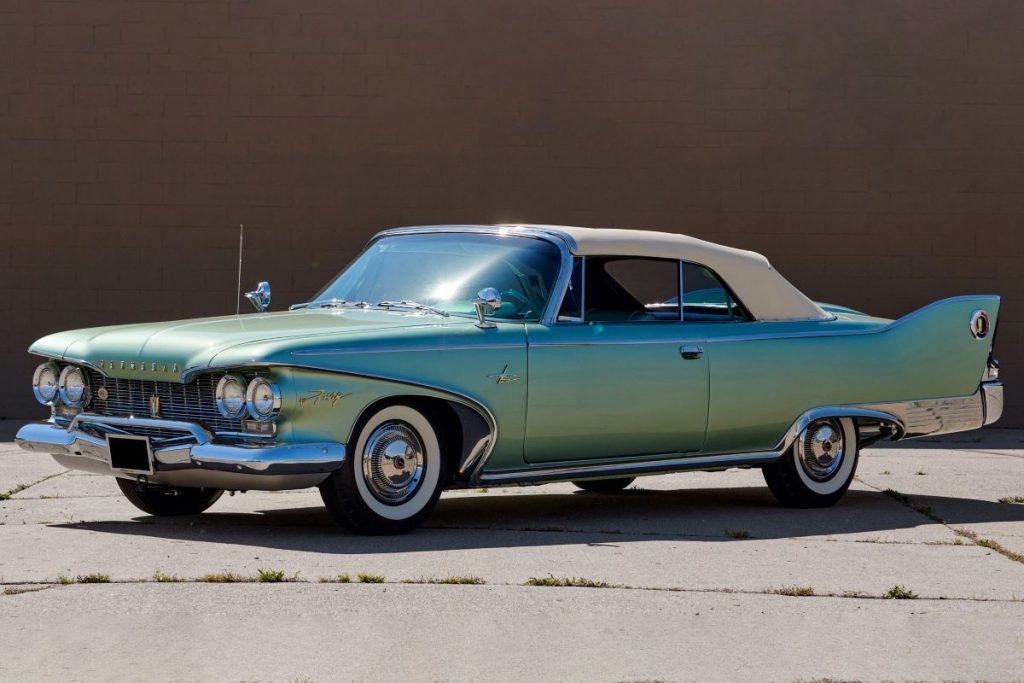 Before you know it, Barrett-Jackson’s Scottsdale auction will be a happening in the northeastern reaches of Scottsdale. If you have plans to be at the granddaddy of auctions, bully for you, but what if you can’t make it? Then allow me to give you the tools to whet your aspirations with the auction docket spanning January 21-29, 2023. See something you like? I am sure I myself can find a few but, rather than show you what I personally like, allow me to show you some things that are unusual.

1960 Plymouth Fury Convertible
Nineteen-sixty was a big year for the Chrysler Corporation, as it was the year that every product save Imperial featured monocoque construction. This technology was not new, but it was new to tackle this on such a large scale. Plymouth in particular called it Dura-Quiet Unibody, which featured over 5,400 welds and was touted to keep rattles and road noise to a minimum, as well as aid in body corrosion prevention. However, the main reason may be due to Chrysler’s long-in-the-tooth frames design that affected interior room, especially compromising rear legroom and headroom.

To contemporary eyes, the 1960 Plymouth was not an improvement over the landmark 1957-58 designs, but the ’60 does have its strengths. What stands out is Virgil Exner’s Googie-tinged features, especially in the interior. But it’s under the hood that makes this convertible stand out from all others: SonoRamic Commando cross-ram manifold with 2×4 carburetion atop a 383. Horsepower was 330, which was not as much as Chevrolet or Ford but neither offered the visual appeal, engineering prowess or low-end torque of the Mopar.

Fury was the only convertible in the lineup, with this Spring Green Fury convertible featuring push-button TorqueFlite automatic, power steering and brakes, swivel seats, 45 rpm record player, padded dashboard and that funky rectangular steering wheel. If you want a 1960 Plymouth that has everything, you may want to look at this one closer.

1979 Ford Bronco Free Wheeling Edition
For all the maligning of the Malaise Era (1973-83), designers did have opportunities to keep things interesting — witness the Free Wheeling option for the Bronco, pickups, Econoline Van, Courier and Pinto Cruising Wagon. Depending on the model year (1977-81), the Free Wheeling package included a blacked-out grille, custom interior, mag wheels, snazzy rainbow stripes and upgraded interior. This simply was a cosmetic enhancement but it reeks 1970s in the best possible light.

This upgraded 1979 Ford Bronco Ranger XLT 4×4 with the Free Wheeling package is Ford’s top-of-the-line SUV and is powered by a matching-numbers 400 V8 that’s been upgraded with a Holley Sniper fuel injection system and backed by Ford’s dependable C6 automatic. Suspension upgrades include front and rear sway bars, steering stabilizer and custom driveshaft. Thankfully, for such a large vehicle, power steering and brakes are present, with the latter upgraded to four-wheel disc brakes.

Additional upgrades included modern LED headlights, AMP research hideaway running boards, and new bumper with bumperettes, among others. The interior features the factory high-back dual-armrest captain’s seats and removable fold-down rear bench seat, which were upgraded with custom black diamond-stitched upholstery. Other features include tilt steering, removable hardtop, roll bar, center console and retro radio with modern capabilities. If I bought this, I would rock my OP corduroy shorts and have nary a worry in the world.

1970 Ford Torino Type N/W
Here’s a car that likely isn’t on your radar. The Type N/W was a regional special based in the American Northwest (does the name make sense now?). All were Torino two-door hardtops painted in three special colors: Oregon Orange, Washington Green and Pacific Blue. Though the names may come off as unfamiliar, they were akin to Grabber Orange, Grabber Green and Grabber Blue, respectively. Equipment in this promotional model included dual racing mirrors, flat-black lower body paint with stripes and identification, and hood black-out and chrome hood pins.

In this ad, you can see that 601 Type N/Ws were planned to be built but, according to Marti Auto Works, only 395 were built. Most were powered by the 302 and 351, but this particular example features the 429 Cobra Jet and a four-speed. The Marti Report shows 12 four-speed Torino two-door hardtops built with the C-code Cobra Jet (which means it’s a CJ without ram air) — how many of those were Type N/Ws is anyone’s guess.