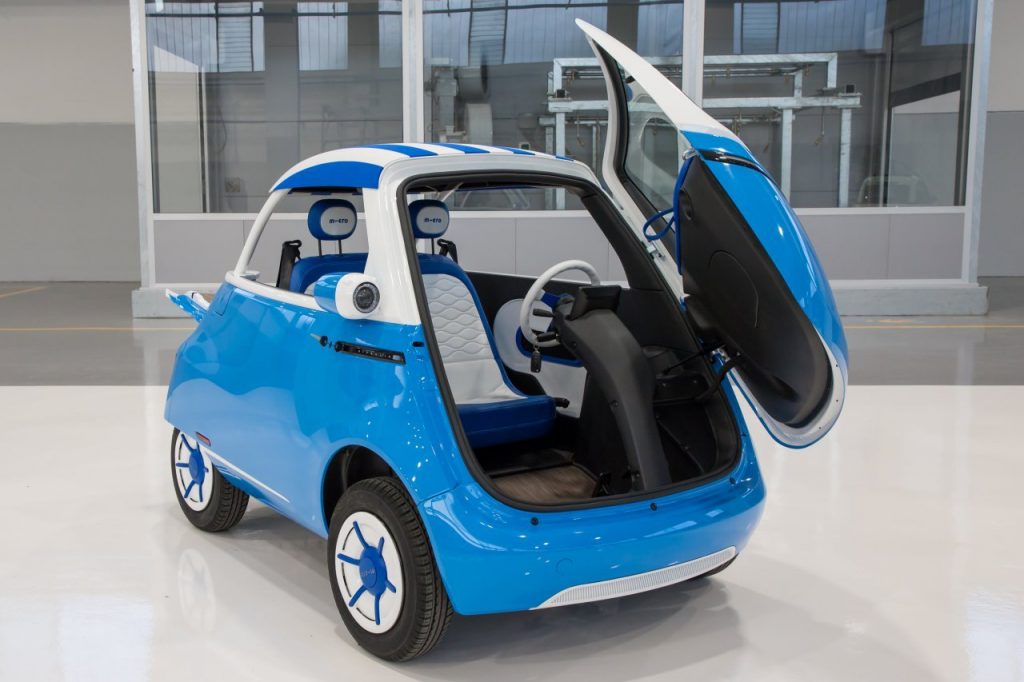 When I saw my first bubble car — a Messerschmidt — in a book as a kid, I thought it was the ugliest, strangest car I had ever seen. But with maturity comes the realization these types of cars have their charms. Seems collectors agree, with prices of the German being beyond the price most people can afford.

So, with the EV revolution going on, maybe this is the perfect time for another cutesy commuter car? Someone out there thinks so, which is why we now have the Microlino.

Created by the Swiss company Miro Mobility Solutions, the Microlino is an EV that resembles the BMW-produced Isetta, complete with front-hinged door. It originally debuted at the 2016 Geneva Motor Show, now finally getting up to speed for 2022.

“The ideal mix between motorbike and car,” says the Microlino website. The diminutive EV has room for two humans and three beer crates, can be charged at a conventional house plug in just four hours, and can be cross-parked so the door can open directly to the sidewalk. If this sounds unbelievably European, then you wouldn’t be wrong since there’s currently no intention of bringing this little bugger to the U.S.

Performance of the Microlino is much better than the Isetta’s, one could surmise: approximately 143 miles maximum range and 56 mph top speed. This allows me to drive 100 minutes back and forth to work with room to spare, though I am unsure how this will feel on the highway where cars are regularly going 75 mph. The Microlino will hit 31 mph in a brisk five seconds thanks to 12.5kW (formerly known as “horsepower”), all from a vehicle that weighs under 1,100 pounds. Stats are based on the 14 kWh lithium-ion, the largest battery available, though 6 kWh and 10.5 kWh sizes are offered.

Microlino features a “self-supporting unibody” made out of aluminum with a reinforced steel door and four-wheel independent suspension. The company also claims their retro-inspired bubble car uses 65 percent less energy consumption and needs less energy during both production and driving than other cars. Zero emissions too? I reckon your electric company sheepishly would have to disagree.

So far, Microlino is being sold in Switzerland, Germany and Italy, all clustered around the Swiss borders. It’s doubtful the company will conquer the United States anytime soon, seeing the rest of Europe still needs to be conquered, but funnier things have happened before … such as the Isetta being sold in the U.S. in the 1950s.