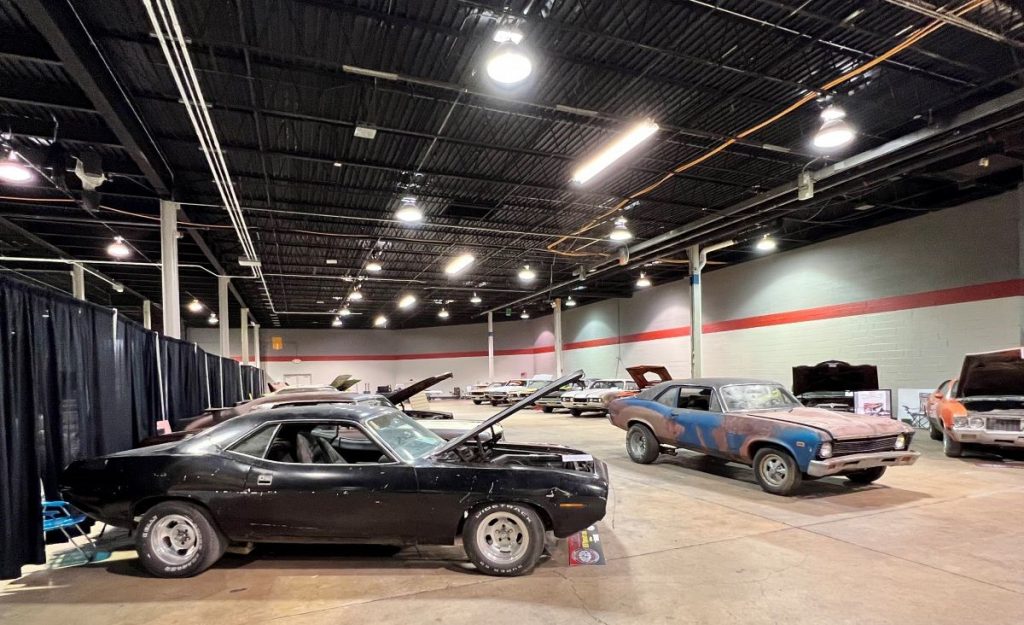 It’s been 10 days since the Muscle Car and Corvette Nationals (MCACN). Folks are still talking about it all over the Internet because it’s an overwhelming display of muscle car history in one safe space where the drama of reality are not able to penetrate. Valhalla? Nirvana? Whatever you want to call it, it’s an awesome show.

Perhaps the most popular display is Barn Finds & Hidden Gems. Curated by Ryan Brutt, the one and only “Auto Archeologist” who travels throughout the Midwest to find the coolest vehicles hoarding has to offer, this display brings to you the same kinds of cars he discovers in his travels. What was it like? Take a gander at these pics!

This 1965 Ford Galaxie 500 looks like it needs little compared to others in the display. In the hands of a relative of the original owner, it recently was pulled out of storage in Washington state and cleaned.

To contrast, this Iowa-based 1968 Chevelle SS 396 is more typical of the kinds of cars you’ll find in the Barn Finds display. No word on what kind of horsepower it was packing.

Only 515 Hurst/Olds Holiday hardtops and Sports Coupes were built in 1968. Though rare, there are still a handful waiting to be discovered. Some, like Luke and Michelle Krooswyk’s (right), can clean up nicely and get running well enough to participate in the Pure Stock Muscle Car Drag Race.

The Pontiac Grand Prix also received the Hurst treatment from 1970-72, with the special model being called the Gran Prix SSJ. Standard colors were white/gold or black/gold, though several were built in other colors per buyer’s specifications. All SSJs were very deluxe, expensive cars in their day. Note the sunroof on this ’72.

The 1969 Dodge Charger 500 was the first real entrant in the “Aero Wars.” Dodge both added a 1968 Coronet grille to the front (to eliminate turbulence from the front-end cavity) and changed the flying buttress backlite into something more like a semi-fastback (again, for turbulence). For years it was believed 392 were built but actually 580 were produced.

What is the ultimate muscle car built? If you said an “A12” 1969 Dodge Super Bee with the 440 Six Pack, you just may be right. With the most efficient air induction system known to man, 4.10 gears housed in a Dana rear, and black wheels without wheel covers, among other features, this Super Bee was built for enthusiasts with a nod towards street racing.

Compare that to this 383 Super Bee, which was Dodge’s bread and butter during the era. This one was sold at Mr. Norm’s Grand-Spaulding Dodge in Chicago, perhaps the word’s most famous performance dealership for Mopars.

In 1969, the 340 engine was available three ways on the Barracuda: standard, with the Formula S package, or the ‘Cuda 340 package. This convertible has the Formula S package (one of 83 built for the U.S.), but it’s even more special because it’s an early production pilot car.

Of course, the Barracuda grew up in 1970. Gone was the Formula S, with the ‘Cuda now being the only performance model. The 440 Six Barrel that became a “thing” for 1969 A12 Road Runners and Super Bees was mainstreamed for many Mopar muscle cars in 1970, including the ‘Cuda. The Shaker hood was optional.

Everyone loves Wing Cars, even if some think they’re ugly. They are among the most desirable muscle cars in the market. Since Plymouth was forced to built almost 2000 of them in 1970 per NASCAR rules (one per each dealership), it should be no surprise that there may be a few hiding from view. This one was originally Lemon Twist yellow.

Ford people swear the 1971 Boss 351 was the fastest small-block muscle car out of the showroom, and admittedly they do have a case. Though rated at 330 horsepower — the same as an LT-1 Corvette and Camaro  — original road tests show the Boss running rings around the Bow Ties, plus every other hot small-block that proceeded it.

Um, excuse me, what about the W-31? Oldsmobile folks like to think their small-block W-Machine should be in contention for fastest small-block. Among the hottest small-blocks in the era, Oldsmobile had the only one that was installed in a mid-size vehicle. This Rally Red 1970 Cutlass S has the looks and power to run with more substantial machinery thanks to its underrated 325-horsepower 350.

The GTX’s last model year was 1971, the year that Plymouth redesigned its whole B-body platform. With a swoopy “Fuselage” design and enough options to have no two cars look the same, you’d think the 1971 GTX would have been a success, but a declining performance market meant that fewer than 3000 were built. This one has all the good boxes checked: Sassy Grass Green, Air Grabber hood, 440 Six Barrel and four-speed.

This 1971 Torino GT is a mess, but that’s part of the attraction of a Barn Finds vehicle — it’s more about the thrill of the find than anything else. Per the Marti Report, this maroon SportsRoof was originally ordered for dealer stock at Deel Ford in Coral Gables, Florida. It was originally painted Light Green with a green vinyl bench seat and came with a 351 two-barrel and C-4 automatic. Other notable options included “Laser” stripes and air conditioning.

When Chevrolet introduced the 396 at the beginning of the 1965 calendar year, it was only available for the Corvette and full-size vehicles. For some reason, Chevrolet felt creating a special deluxe Chevelle with the engine was a better way to compete with the GTO than mainstream it into the Chevelle series (sarcasm implied), but that’s what Chevy did. All 201 built were similarly loaded aside of being Tuxedo Black, Regal Red or Crocus Yellow.

Yenko Novas are the most enigmatic of the 1969 Yenko supercars. Unlike the Camaro and Chevelle, the Nova was not a COPO order, so Don Yenko had to transplant the 427 like it did for 1967-68 Camaros. A 425-horsepower 427 in a lightweight Nova was beyond the scope of Chevrolet, but it was within the scope of Chevrolet enthusiasts. Reportedly, only 37 were built, and supposedly some were sold as 396 cars without the 427 transplant.