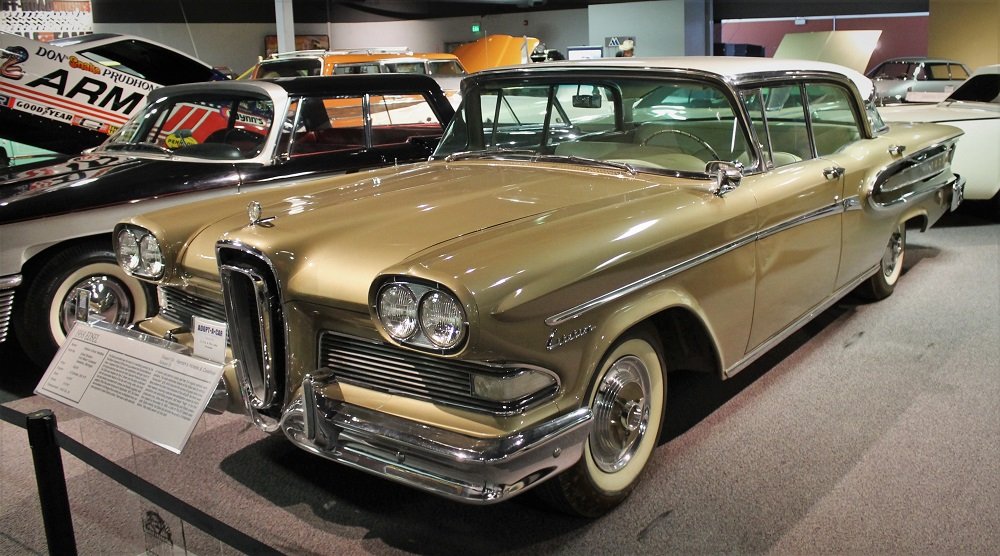 It’s Thanksgiving! The greatest of American holidays is upon us, so it only seems appropriate that, amongst the cranberry, stuffing and pecan pie, that we can discuss the turkeys in postwar American automotive history.

To be clear for you youngsters, “turkey” is a term that suggests “something that is extremely or completely unsuccessful, especially a play or movie.” Maybe it is me who’s out of touch for not realizing who understands the slang, Daddy-O, but nonetheless here’s an attempt to give an objective review on a few.

1958 Edsel
Sure, this may come off as a cliché, but the Edsel is the granddaddy of turkeys. When I was a kid reading articles on the ugliest cars ever, the Edsel always made the list, but it was quite an unfair characterization to my eyes. Of course, I wasn’t alive in 1957 when the Edsel debuted, so I never could view the car with contemporary eyes of the time. Maybe the Edsel’s biggest stylistic sin was its horse-collar grille (a “toilet seat” to some), but the rest of it comes off as more tasteful than much of General Motors’ 1958 lineup.

The sad truth is that the Edsel was the wrong car at the wrong time, with plenty of faulty marketing and hubris on Ford’s part, plus a debut at the beginning of a recession that hurt the medium-priced market — even the death of DeSoto was hastened due to the economic downturn (overall, industry sales were down 31% from the 1957-58 model years). As such, the Edsel is a whipping boy of sorts, often for the wrong reasons, but it’s still a turkey as the effort and equity behind its introduction never translated to sales, though several years later Ford’s marketing hit a grand slam with the Mustang.

2002 Lincoln Blackwood
Cadillac sat on the sidelines when Lincoln introduced the 1998 Navigator, an SUV that seemed to go against the brand’s image, but it was Ford Motor Company that took the risk and produced the vehicle to great success. The Blackwood, another answer to the question that was never asked, was much less successful.

Though the 1999 Blackwood concept was a success, the 2002 Blackwood — a cross between the Ford F-150 SuperCrew and Lincoln Navigator — was not. All were black with a simulated woodgrain cargo box. Though production was projected at 18,000 over a duration, sales were so poor that Lincoln discontinued the Blackwood after the 2002 model year, though a 2003 version (leftovers?) was sold in Mexico for three more months until Lincoln closed the book. In total, 3,356 were sold.

2001 Pontiac Aztek
Like the Edsel, the Aztek is another model that has become a whipping boy of sorts despite its inherent goodness that shone through for those who were paying attention. Initially introduced as a concept car in 1999, the Aztek was a “lifestyle” vehicle that was popular enough that it was green-lighted for sale for the 2001 model year. However, due to compromises with the production vehicle (especially with the A-pillars from the Montana minivan) and Pontiac’s propensity for body cladding, the production Aztek ended up with awkward proportions and controversial styling.

It was a shame, as the Aztek featured great utility and versatility unrivaled in the market. Marketing during its introduction was strong thanks to a co-branding opportunity with the new “Survivor” TV show, but the Aztek became the butt of jokes — maybe a baboon’s, as it looked like one. For 2002, Pontiac smoothed the cladding and matched it to the body, which helped the looks immensely; ditto the parking lights, going from amber to clear. However, despite marginal tweaks that toned down the styling, the Aztek was a lost cause and was discontinued for 2006. GM forecasted as many as 75,000 Azteks per year, but production never went beyond 28,000 at its peak (2002).

1970 Plymouth Barracuda
This may come as a surprise, but Plymouth’s first full-fledged pony car for 1970, six years after being a Valiant variant, was a dud (or a turkey, if you will). Though the Barracuda was introduced several weeks before the Ford Mustang, there is a reason why this class is called “pony car.” The 1967 redesign was as handsome as anything in the market, but its Valiant origins were still readily apparent, with a big-block shoehorned in a way that made a 390 in the Mustang look like a simple installation.

So when Plymouth ditched the A-body platform for the all-new E-body for 1970, it was the Barracuda that Plymouth should have produced several years earlier. The 1967-69 Camaro’s influence was evident, but Plymouth took the template and made it its own. The E-body platform featured mid-size B-body DNA, which allowed Plymouth to offer any engine in its roster, from the 198 Slant Six to the 426 Hemi and 440. Sounds like Plymouth did everything right, so why the turkey label? Because Barracuda sales never reached expectations — check out this trajectory:

Nineteen sixty-seven was a strong year for everyone, but Barracuda sales paled even when compared to me-too responses like the Pontiac Firebird. The downward trend mimicked the Mustang’s, but Ford sold almost 10 times as many Mustangs. That market trend would continue into 1970 for most pony cars, with the Mustang losing over 100,000 in sales. Still, expectations were high for the all-new Barracuda, yet it was too little, too late as the sporty car market continued to crater, with 1971 sales especially falling to pitiful levels. This would be the low point through 1974, with production never reaching 20,000.

It’s worth noting the sister Challenger model sold much better than the Barracuda, though it too suffered a huge fall in 1971. All pony cars struggled during this period, though it is the 1970 Barracuda that suffers from turkey status.

Are there other cars that defied expectations in the market and were a disappointment in some manner? Chrysler-Maserati TC? Jaguar XJ220? Tell us!