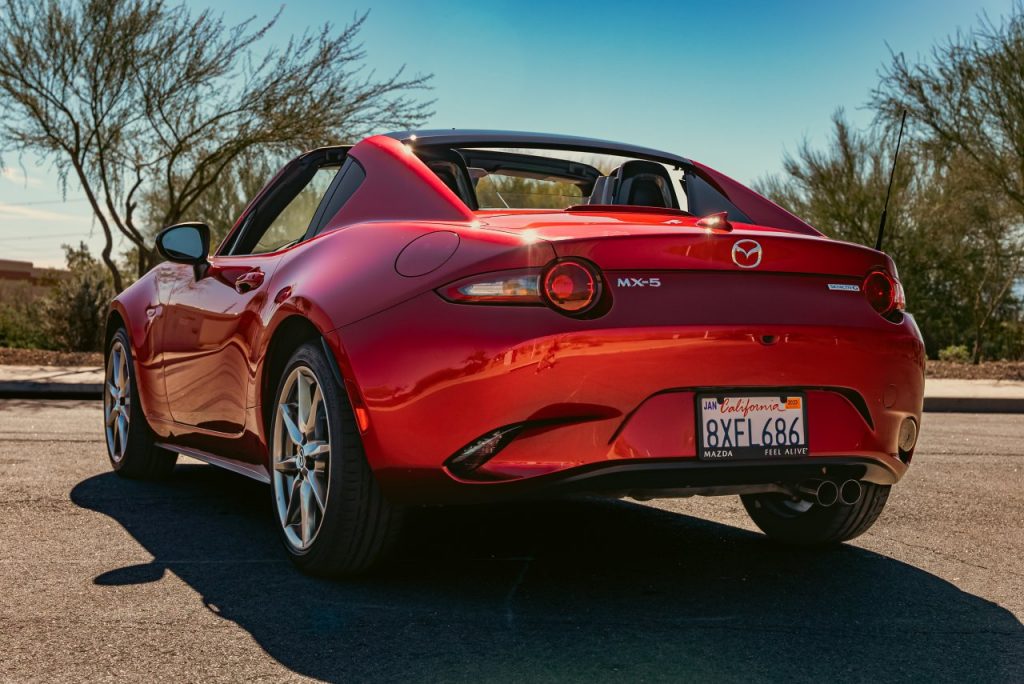 M.I.A.T.A. Miata Is Always The Answer. The Miata is Mazda’s homage to post-war British sports cars, and it has been used as the baseline comparison for all other sports car since its inception in 1989.

Our example is a 2022 Mazda Miata MX-5 RF Grand Touring 6MT featuring an MSRP of $36,610. That price includes $1,015 in delivery, processing and handling fees. Our Miata is finished in Soul Red Crystal Metallic, a $595 premium, with a black interior. One of the new features for 2022 is Kinematic Posture Control (KPC). The KPC system helps improve handling by applying a small amount of brake on the inner rear when cornering, which can be disabled when traction control is turned off. Though equipped with the six-speed manual transmission, the optional automatic transmission is only available in top Grand Touring trim for 2022, which is fine with us because we think you should choose the six-speed manual anyway.

The exterior retains the sporty yet aggressive styling the Miata’s had since 2016 while maintaining the resemblance of previous-generation Miatas. The Soul Red Crystal Metallic goes a long way toward getting attention while looking particularly stunning in the sun. The RF has a good-looking silhouette that presents better than most soft tops, yet still offers a targa open-top experience when retracted, which is the best way to experience this car. An interesting exterior feature are the black panels ahead of the C-pillar. These look like windows at first glance, but they are simply for aesthetics and help hide the guts of the retractable top.

The Miata offers a snug interior with everything within reach for the driver. Mazda made clever use of the space, and I enjoyed having the removable cupholders that allow for customization in several locations. The heated seats are fantastic for cold mornings or if you want to drive the car with the top down on a cold day. The RF hardtop certainly is a nice luxury that allows you to raise or lower the top with ease for a targa experience in seconds. The seven-inch touchscreen sometimes feels slow to respond, and the physical buttons in the center console are easy to hit accidentally from time to time when shifting, though your experience may vary. With the Miata’s intimate closed quarters, the Bose nine-speaker audio system feels like it would make audiophiles happy, but my favorite feature is the wireless Apple CarPlay and Android Auto. Most cars these days feature wired CarPlay, so it’s nice to see the wireless pairing as a one-up on others. The trunk is small (like the rest of the car, but functioned fine for groceries and bags, though this is something that should be up for consideration if the Miata will be your only car.

Power comes from a 2.0-liter inline-four producing 181 horsepower and 151 lb-ft of torque, with a redline approaching 7,500 rpm. That power is sent to the rear wheels via a fabulous six-speed short-throw manual. Those 181 horses may not sound like much, but you must keep in mind the Miata only weighs 2,452 lbs, giving it a power to weight ratio similar to cars that cost twice as much. This makes for a 0 – 60 sprint in around 5.8 seconds, 0.1 seconds slower than the soft top, which is plenty quick to get your kicks. The engine is decently quiet at idle, but the noise picks up quickly as the rpms climb, and there is a lot of excitement when accelerating. Another important detail is how good the fuel economy is: Mazda rates the Miata at 26 mpg city and 35 mpg highway, and I was hovering around 32 mpg driving around Phoenix with “spirited” driving.

This car drives so well that every time I parked the car, my next thought was the anticipation of driving it again — you can’t help but smile behind the wheel. Since the short-throw shifter feels amazing and clicks into place with confidence, you are able to focus on the road and spend less time worrying about missing a gear. Additionally, the gearing allows you to shift through several gears yet remain within the legal limits, which is a huge plus for driving’s sake in an age where many performance cars are still in first or second gear by the speed limit. The steering feels direct and snappy, which can be attributed to the light weight of the car. With traction control off, the car will spin the tires and slide easily, offering a maximum experience should you choose to track the car.

This is one of the most fun cars you can buy from a dealership. The Miata comes standard with a manual transmission that makes you wonder why Mazda even offers an automatic transmission. Sure, it has some odd user experience quirks and space limitations, but the Miata is a focused sports car after all. It proudly wears the Miata name and sets an example for sports cars everywhere. If you want one of the best driving experiences and all the smiles and fun you can have chucking a sports car sideways, you should try the Miata on for size.