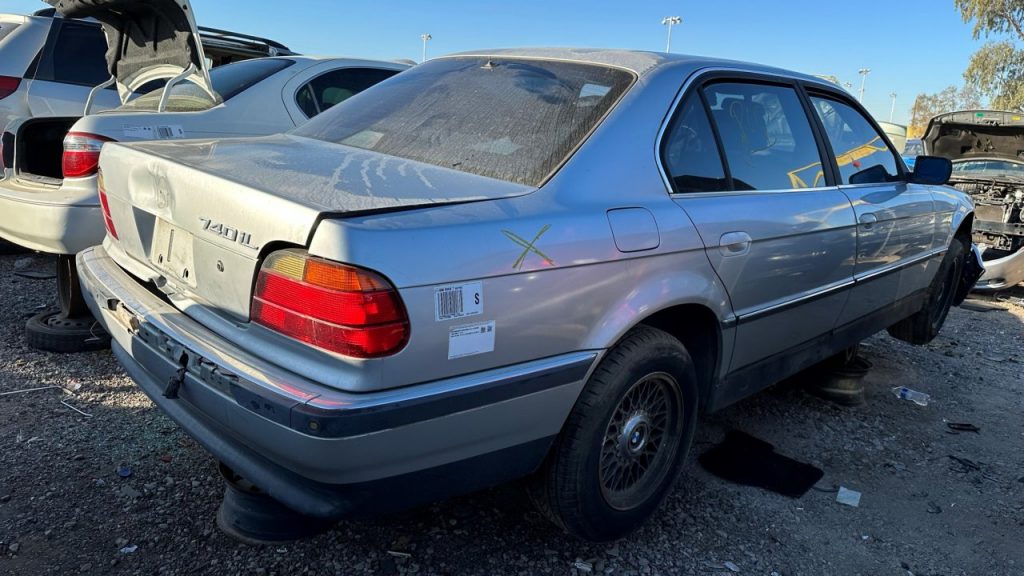 Wandering through the wreckage at the local “pick-and-pull” junkyard is always a humbling experience. Every vehicle being torn apart for parts has some sort of story to tell. My thoughts always turn to each vehicle’s original owner – someone who took great pride in purchasing it new. I wonder what those people would have to say about their former pride and joy if they were walking alongside me and could share its story.

This early-Sunday-morning junkyard stroll provided treasure trove of conversation pieces – forgotten cars, trucks, minivans, and sport utility vehicles that have been retired from duty and relegated to donate their remaining usable parts to other vehicles. I came away from the experience with a few favorite vehicles. And it was worth the $2 entry fee for the sake of entertainment and nostalgia.

Here are five vehicles that caught my eye from my scavenger hunt, all of which happen to be from the 1990s, which is my favorite era of (now-classic) automobiles.

The E38 BMW has been a long-time favorite of mine. This generation of BMW’s flagship executive sedan debuted in 1995 and was produced until 2001 in a variety of configurations including a 5.4-liter V12 model. The “L” in the name of this 7-Series means it came with the available long wheelbase for added cabin space particularly for rear occupants. Technology for the E38 was advanced for it time, and it was the first European car to offer satellite navigation as well as curtain airbags. It was also the last 7-Series to be available with a manual transmission. The focus car for my junkyard trip appeared relatively well kept and retained its mesh-style wheels and chrome center caps. This car sold for $65,020 when it was new – a sum which inflates to a staggering $118,875 today.

The Beretta was a front-wheel drive two-door compact coupe that was first sold in 1987 on the General Motors L-body platform. It lived on through 1996 in a variety of versions including a special Indianapolis 500 pace car with unique body work and graphics as well as an available Getrag five-speed manual transmission. A four-door sibling, the Corsica, was offered concurrently. Power for the Beretta was shared with the Chevrolet Cavalier, starting with a 2.2-liter inline-four paired with a three-speed automatic transmission. At the high end of the Beretta performance spectrum was a 3100-series (3.1-liter) “L82” V6 capable of output of 160 horsepower. This coupe evokes nostalgia for me since my grandmother had a 1989 black model when I was younger.

The Taurus had a revolutionary impact on the midsize sedan marketplace when it launched in 1986. It incorporated influential aerodynamic styling and refined driving mannerisms. It started on the Ford DN5 platform and evolved through six different generations, marketed concurrently as the Mercury Sable. A high-performance variant called the Taurus SHO (“Super High Output”) came out in 1989 with a 3.0-liter V6 paired with a five-speed manual transmission. But this time of year, the famous Taurus at the forefront everyone’s mind is the station wagon version: The classic 1989 film National Lampoon’s Christmas Vacation prominently featured a wood-paneled Taurus wagon as the cargo carrier of choice for the Griswold family’s massive Christmas tree.

The Grand Cherokee was a popular midsize five-door sport utility vehicle that debuted in 1993 on what was known as the ZJ platform. Development had begun much earlier, when Jeep was owned by American Motors Corporation (AMC) prior to the 1987 Chrysler acquisition. The Grand Cherokee came in three available trim levels (base, Laredo, and Limited). Its initial drivetrain was a 4.0-liter inline-six paired with a four-speed automatic transmission or a five-speed manual, and available rear-wheel drive or “Quadra Trac” four-wheel drive. Performance enhancements came a few years later when a 245-horsepower variant was offered with a 5.9-liter Magnum V8 that was pulled from the Dodge Ram pickup truck. It also offered amenities normally seen on luxury cars like woodgrain interior trim, a leather-wrapped steering wheel, automatic climate control, and heated seats. My junkyard sighting was a 1998 which exhibited revised styling from a 1996 refresh with a larger grille, different body cladding, and new wheel options.

The Japanese-built Trooper has been around for over 40 years, first launching in 1981 and evolving into its second generation a decade later. This full-sized sport utility vehicle came to market long before the SUV craze hit the automotive landscape in the 1990s. The platform has been one of the most widely rebadged in history, marketed by the Chevrolet, Subaru, Honda, Opel, Vauxhall, and Holden brands individually. Another particularly unique variant was the 1996 through 1999 Acura SLX, one of which I spotted on this trek. This vehicle was produced by Isuzu but sold under the Acura name several years before Acura’s own SUV, the MDX, came to market. Among the Trooper and SLX’s features were a Torque-on-Demand 4WD system, a large “safari” sunroof, a 70/30 split rear door, and power-folding sideview mirrors. The Trooper was phased out in the United States after the 2002 model year.

I have five other feature cars to showcase in my next article on this junkyard trip. Stay tuned!