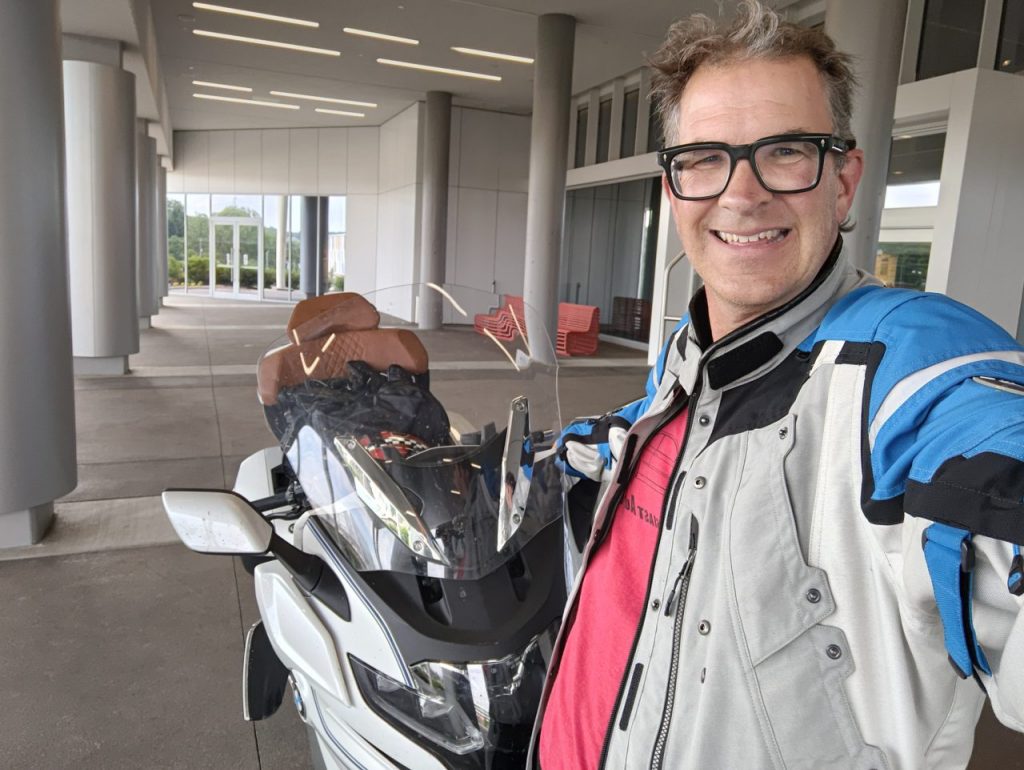 I woke up at 5:30 a.m. and was loaded up and back on the bike by 6:00 to hopefully complete the 590 miles to the Summit Hotel in Cincinnati. This seemed like an easy ride after the marathon the day before, but I knew that getting an early start was essential for me to be in Cincinnati on time.

During the trip so far, the weather had been clear aside of the aforementioned rain on day 2 in New Mexico. As I rode along around 80 mph on Interstate 44, I glanced at my mirrors and noticed a lot of very dark clouds coming in my direction. I sped up a bit and tried to outrun the rain. I hate riding in the rain, especially on interstates, and wanted to avoid dealing with riding in the rain if at all possible.

I was able to outrun the weather front and entered St. Louis in about three hours. I merged onto I-70 to Indianapolis and kept moving. About 100 miles later I stopped for fuel and, after filling up and eating a hot dog lunch, made a quick call to my friend John Saccameno, whom I was meeting in Cincinnati to get a weather report. He asked me exactly where I was located so he could pull a weather map. He told me to get on the bike and get moving as fast as possible as there was another serious rain storm right on top of me. I hopped on the bike and again raced away from the thunderstorm behind me.

About 45 minutes later it was all clear skies, and I was able to enjoy the ride once again.

I spent the following 2 hours making my way to Indianapolis and, after a quick gas and drink stop outside the city, returned to I-70 and eventually took exit I-74 towards Cincinnati.

According to GPS, I had about 200 miles to go before arriving at the Concours host hotel. I found myself riding faster as at this point — I just wanted to be there. The K1600GTL did not seem to mind, taking literally everything that I threw at it, happy to devour the miles as quickly and smoothly as possible.

At 6:09 p.m., I arrived at The Summit Hotel in Cincinnati and parked my trusty steed in front. Mission accomplished! After taking a quick selfie with the bike, I called John to get help with my luggage, then changed for the Saturday Concours hangar party.

I could not believe that I was able to make it on time and attend the party when, only 3½ days earlier, I had been in Riverside, plus doing it on a motorcycle seemed somewhat unreal. At the party I ran into a bunch of friends who had been following the trip on Facebook and congratulated me on making it, as well as telling me I was crazy.

Thinking back on the trip, it is almost as if it did not happen. The heat in the desert, the stress of the 15-plus-hour day to get to Springfield, riding in the misty night, the racing away from the weather … all of it seems like something I dreamed.

I did learn a number of things during the trip:

The first is that had I known more about the Iron Butt Association, I could have gotten one of their coveted ride patches. Oh well.

I also learned that I am never likely to try to set a pace like this again on any motorcycle, even one as capable as the K1600GTL. That third day that totaled almost 1,000 miles was not only crazy but also a bit dangerous. Spending 15-plus hours on a bike is just too long for this rider.

In addition, I discovered that I am still able to do stupid things and succeed at them if I am determined to do so. I was not sure I was up to this ride, and am quietly pleased that I was able to finish it.

Now for some final thoughts on the bike: the software link to the phone needs to be improved quite a bit. It feels like a beta version and crashes quite a bit, and when it does you lose your navigation as they are linked. These crashes happened about once a day and required me to pull off the road in order to reboot the system both on the bike and the phone. I probably lost about an hour as a result.

Second in the possible negative column is that the K1600GTL is designed for true high-speed touring. I found when traveling at 70-75 mph that truck traffic would create a lot of turbulence. When I decided to accelerate at very high speed from that traffic, the turbulence completely disappeared. This is a bike designed to cruise with complete stability at 100 mph. While in the EU on high-speed roads this is great; on American interstates at 70 mph, it is less than ideal. The solution I found was to simply ride faster. I am happy to say that I did not receive a single ticket but let’s chalk that up to luck.

The only other complaint I have about the bike is that the high-beam switch is hidden on the very front of the left handgrip. I only found it after parking in Springfield and, believe me, I could have used it that night.

On the plus side, the K1600GTL has the most comfortable factory motorcycle seat I have ever come across. Even after the 15-hour day, I was never uncomfortable.

There’s more: The fit and finish on the bike is second to none, the performance is remarkable and the suspension is the finest of any touring bike I have ever ridden.

Then there are the customization options. The K1600GTL lets the rider literally dial it into the type of touring motorcycle they are looking for, with engine and suspension settings easy to navigate and modify.

Finally, I honestly feel that had I been riding any other bike than the K1600GTL, I could never have made this trip and arrive in time to meet my deadline. With the K1600GTL, BMW has truly the best sport touring motorcycle in the world.

Adventures like these are the ones that I will still remember fondly long after said vehicle is sold and gone. Yes, the trip was hard and, yes, the conditions were not ideal, but I can still feel that sense of accomplishment at having completed what I initially thought was an impossible journey. These experiences are, in my opinion, the entire reason for having interesting vehicles. If you have not yet taken a car or bike journey like this one, I urge you to do so. None of us are getting any younger and the only commodity that is truly finite is time, so I would recommend not wasting what time is left.

Check out Day One, Day Two and Day Three of his motorcycle odyssey.