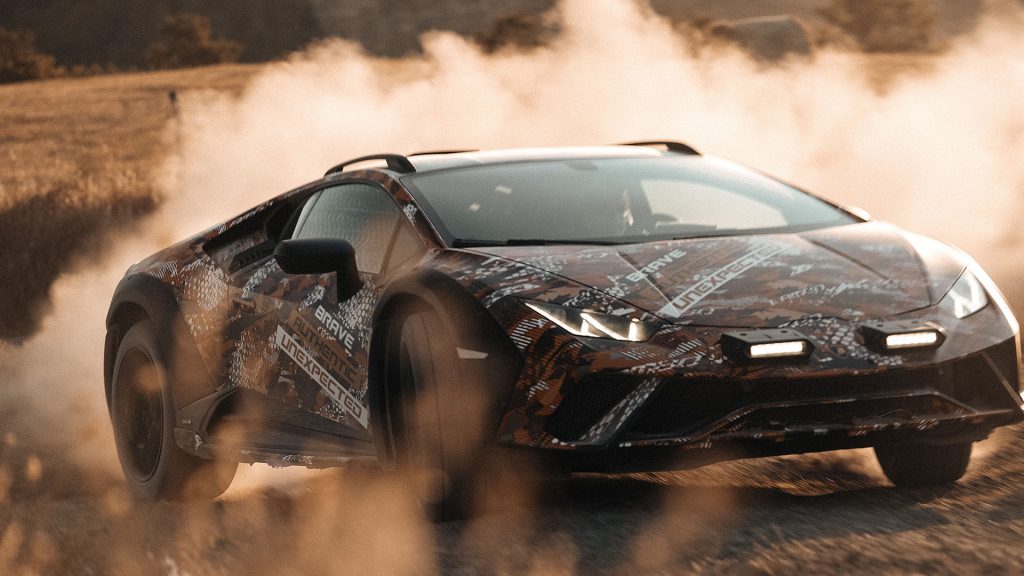 It has been a while since we saw the press release for the Lamborghini Huracán Sterrato, somewhat of a marriage between the Huracán and the Urus, the bright orange Huracán Sterrato concept looked like Lamborghini took the Performante coupe, added a duck wing to the rear that we would see later on the EVO edition, fitted additional lights between the headlights and even put a roof light at the top, complete with longitudinal bars on the roof, almost like a luggage rack, but the most unconventional modification was the ride height … instead of lowering the supercar, Lamborghini raised the suspension, added wheel arch flares, and fitted off-road tires … the Sterrato was a concept of a supercar that could go off-road thanks to the protection plates fitted both underneath the front bumper and the rear diffuser. I’m not sure Lamborghini ever built an actual unit of this orange Huracán Sterrato concept with the impressive livery and gold wheels, but things became quiet after the press release, a lot of rumors, but no official news nor any spy shots of when looked like the most unconventional Huracán V10 ever, until recently, when we saw a black Lamborghini Huracán with a raised suspension being road-tested up north, on ice and snow covered roads, and while some agencies published the spy shots of this special V10, most of the attention was drawn by an evolution of the Lamborghini Urus that was being tested at the same time, on the same roads. 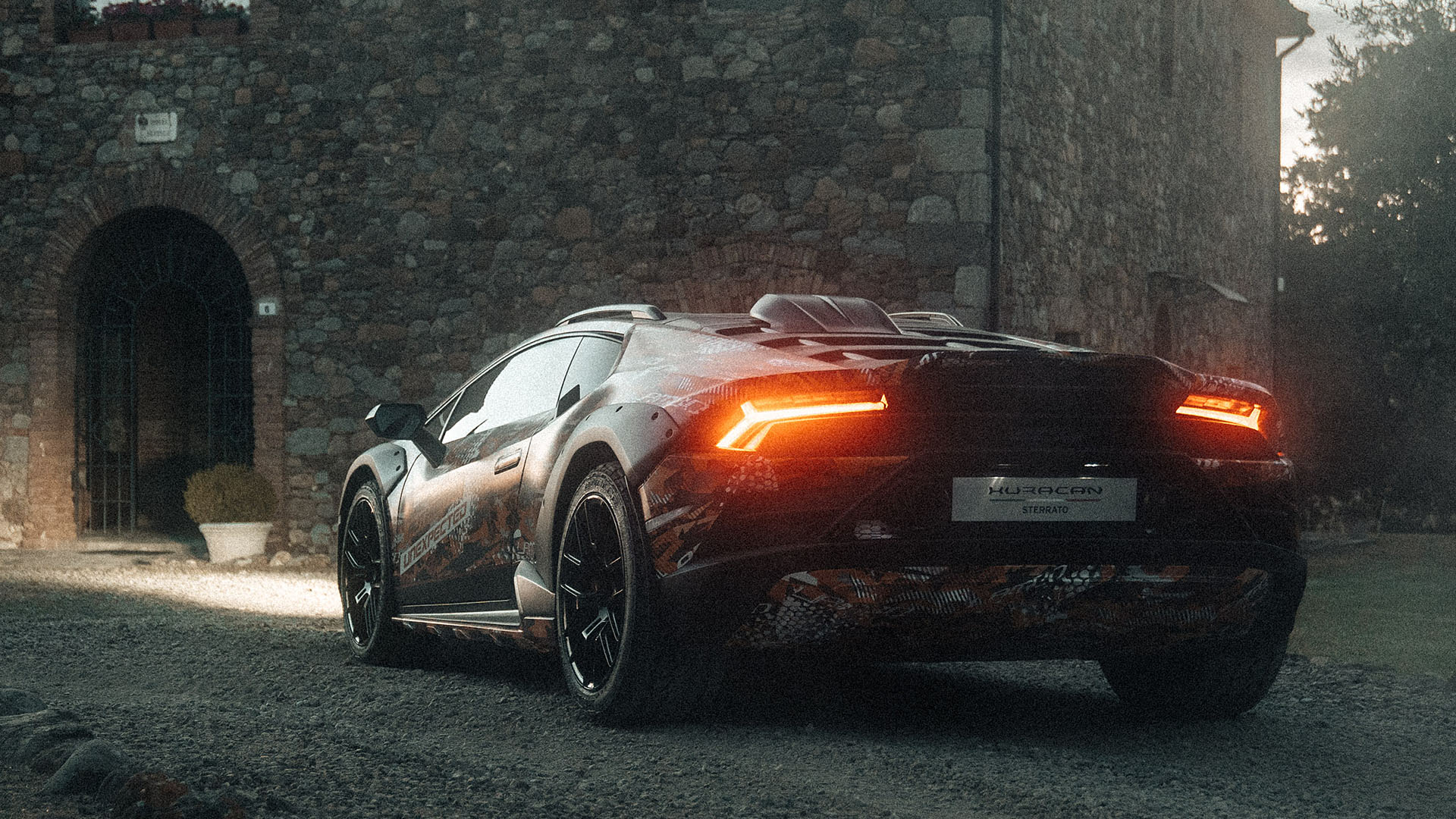 The test mule did have some differences from the original concept, for one there was a large air intake on the engine cover, drawing air from a scoop raised above the roofline, while the front bumper looked exactly like the EVO unit now, still with bars on the roof, but no wheel arch extensions … but as usual that was only a test mule, and now Lamborghini finally teases us with a slightly camouflaged car of what seems to be the official Huracán Sterrato, or the off-road V10 model from Sant’Agata.

The black plastic, bolted-on wheel arch extensions are back, slightly different from the original concept ones, the air scoop on the engine cover is there, there seems to be some kind of reinforced side sills fitted, while both the front and rear bumper get protection plates for when you might hit a rock going off-road, while the two ‘pods’ on the front bumper house extra bright LED units, it seems the roof-mounted LED bar isn’t fitted on this teaser car, it might be an option, however, let’s wait and see. 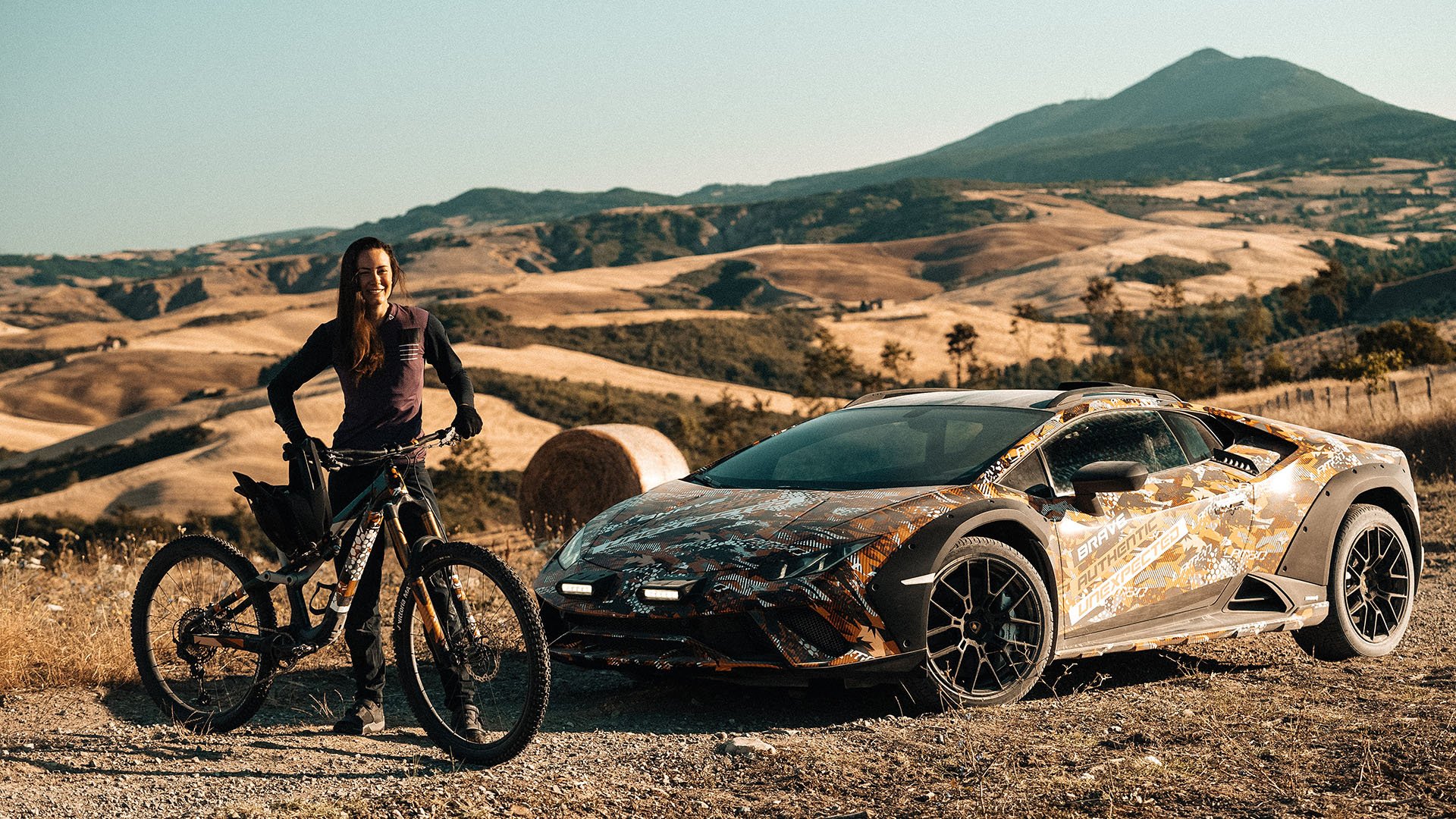 What does look odd is the fact this Huracán Sterrato does come with a front bumper that really reminds me of the unit found on the old Huracán Performante, also note on the ‘shoulder’, just behind the door, there seems to be a grille fitted to rocks and small stones won’t be able to go into the air intake behind the side windows, and I do like the style of the wheels on this car, they look amazing and suit this kind of car perfectly.

Rumor has it we’ll be seeing the Lamborghini Huracán Sterrato in August 2022 during the Monterey Car Week in California, the USA, another rumor is that there will also be another Urus being unveiled at the same time … I for one am really looking forward to this.