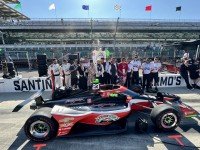 After a Red Flag was waved with four laps to go, Santino Ferrucci held his position in the No. 23 DRR Palermo’s/Barrett-Jackson Chevrolet for the final laps of the exciting 106th Running of the Indianapolis 500 where he earned his fourth career top 10 finish, placing in the 10th position out of 33.

The Red Flag forced all cars to stop in pit row after Jimmie Johnson in the No. 48 car fell victim to Turn 2 after taking the corner too low with six laps left in the race. Race day at Indianapolis Motor Speedway (IMS) proved to be challenging for many teams as the track temperature held steady at 120 degrees Fahrenheit for a majority of the race with 20 mph wind gusts which led to several crashes coming into and out of Turn 2.

Ferrucci’s performance was consistent as he climbed into the top 10 shortly after the start of the race from row 5 of the grid where he had qualified 15th. He held a steady position in the top ten as he navigated an intense, drama-filled afternoon, fighting his way to a contending position in the first half of the race and battled early race leader Scott Dixon for second position on the lap 110 restart.

Ferrucci competed with the leaders in the top-five from lap 110 to 150 before Scott McLaughlin hit the wall on lap 151. Ferrucci swapped positions with several drivers in the final 30 laps before settling for tenth at the checkered flag.

“It was an incredible experience to be a part of the 106th running of the Indy 500 as a partner with Dryer and Reinbold Racing. Santino drove an exceptional race and we are proud to have been a part of his fourth career Top 10 finish at the Brickyard,” said Craig Jackson, Chairman and CEO of Barrett-Jackson.

Barrett-Jackson’s Vice President of Brand Strategy and Chief Philanthropy Officer, Carolyn Jackson, added, “It was incredible to see the #DrivenHearts for the American Heart Association on the No. 23 car and sharing this experience with longtime friends of our auction family. Michelle Mauzy with her daughter and son-in-law Kacey and Aaron Whisenhunt, Joe Riley and Brent Jones have all contributed to raising awareness and funds for the #DrivenHearts campaign. We were grateful that they were willing to join us for this experience”

“Our car was phenomenal in the beginning, and we felt great,” Ferrucci said. “Our Chevy was fantastic and hats off to the crew.”

No. 23 DRR Palermo’s/Barrett-Jackson Chevrolet car on the track

No. 23 DRR Palermo’s/Barrett-Jackson Chevrolet IndyCar on the grid