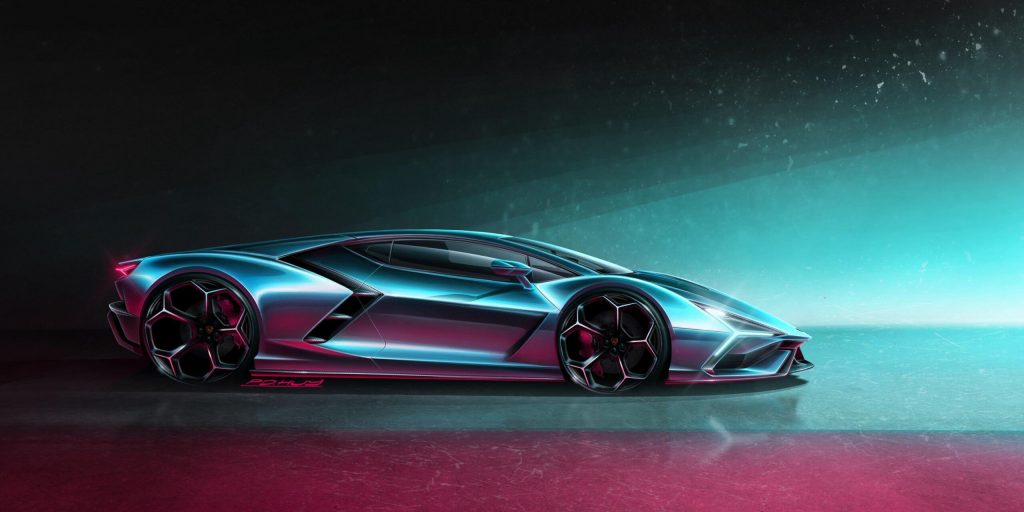 Automobili Lamborghini SpA is at a pivoting point in its history, the change from NA V12 engines to hybrid power for the flagship production model, with the Lamborghini Aventador production coming to a halt, it is time for the next generation of the flagship model, and while we’ve seen the original V12 engine from the Sixties all the way up to the Murciélago, in 2011 the Aventador came with a newly developed engine, still 12 cylinders, still naturally aspirated, but no longer based on the Bizzarrini unit anymore, and for the 2023 flagship, there will be yet another V12 engine, developed from scratch to be coupled to electric motors to create the first-ever hybrid Lamborghini production model.

Yes, I know both the Sián and Countach LPI 800-4 have a supercapacitor and an electric motor in addition to the Aventador V12 engine, but both are limited edition models, not actual production models, so the Aventador successor we’ll be seeing in 2023 will effectively be the first hybrid production car made in Sant’Agata, later the Urus will follow and the Huracán successor will also be a hybrid, the first all-electric Lamborghini will be launched after that, most likely a concept will be shown by 2025 with an actual production model, most likely a 2+2 GT as a fourth model in the lineup will be available to clients by the end of the decade.

But back to the Aventador successor to be unveiled towards the end of 2022 with first deliveries during 2023, and while it has been a while since we’ve seen the first camouflaged test mule, development hasn’t been standing still in and around Sant’Agata, but Lamborghini is very good at keeping secrets, you’ll only see a spy shot when they want us to see one, so was that initial prototype a clear indication of what’s to come, or are they working on something different behind closed doors … we’ll only be certain once they officially release the first press photos.

The most striking detail on the test mule was the placement of the exhaust pipes, which were shown very high up on the rear fascia, was this a decoy to put us all on the wrong foot, or will the new Lamborghini flagship really come with this feature … that remains to be seen, similar to the total power output, we know Lamborghini is developing a completely new V12 engine for the successor, and we also know there will be at least one electric engine added to it, but what will the total power output be?

That’s completely unclear at this time, I do think it’s clear we’ll be looking at a four-wheel-drive set up just like the Aventador, the evolution of the Diablo VT system, since then no V12 flagship came with rear-wheel-drive anymore, and with the outgoing Aventador Ultimae delivering 780hp from her V12 alone it’s safe to say the next generation will come with at least as much, if not more power, so even if the electric motor only adds 100hp we could be looking at a 900 hp total, we might even be reaching that magical figure of 1,000 hp next.

But will this new V12 engine have a similar or large displacement compared to the outgoing Aventador unit? Personally, I think we’ll no longer have a 6.5-liter capacity anymore, this new Lamborghini V12 might have a smaller displacement to become less heavy to counteract the increased weight due to fitting batteries and one or more electric motors, perhaps Lamborghini will be able to create a 4 or 5-Liter more compact V12 engine with 800hp or something, over the last decade engine development has improved, so the big Aventador V12 might no longer be required to get similar or higher power output delivered.

We’re all eagerly awaiting what Lamborghini will bring to Monterey Car Week in August, a venue where they usually unveil something really special, but I highly doubt we’ll be seeing the Aventador successor so soon, my guess is that this new V12 flagship will only be publically unveiled towards the end of 2022, if not early 2023, but rest assured, some of their high-profile clients have already seen what the future looks like, and orders have been signed for the Aventador successor at the time of writing … I’m sure the anticipation is killing those clients, having your name on an order form for the brand new, V12 hybrid flagship must be the greatest feeling in the world.

For now, all we can show you are some really nice renders created by Pham Huy @huydrawingcars, he even made some taking more inspiration from the magnificent looking Terzo Millennio concept, having that one turned into a hybrid production model would be amazing, as back in 2019, Mitja Borkert did state the Sián was not a preview of the next-generation flagship, but that white camouflaged test mule says otherwise:

This is what the new Lamborghini flagship could look like if the design would be inspired by the stunning Terzo Millennio:

The post The Lamborghini V12 hybrid will arrive soon appeared first on LamboCARS.