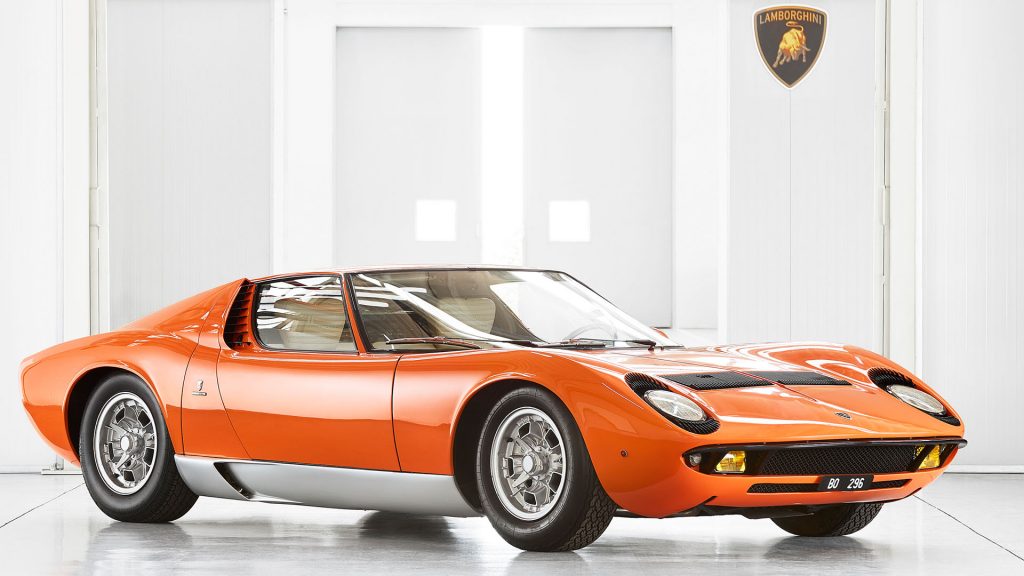 Back in the Sixties Automobili Lamborghini SpA was still a very young company, being founded in 1963 with the stylish 350 GT coupe as their first production car, the make Lamborghini got worldwide recognition when they unveiled the sensual looking Miura in 1966, in fact, chassis #001 was parked on the Place du Casino during the 1966 Monaco F1 week, and she drew a lot of attention, Ferruccio Lamborghini got several requests for this low-riding beauty with his name on it, and many consider the Miura to be the first real supercar in automotive history, something that is reflected in the current market value of these are Bulls from the Sixties, acquiring one today will set you back seven figures in Euro or US$ for sure.

But the Miura story started in late 1965 already, when Lamborghini showcased a first iteration of the Miura chassis at the Turin show, at that time with Borrani wire wheels mind you, and history would have it this chassis never had a body installed onto it, it remained in the same shape as in 1965, disappeared out of sight for decades, only to surface again after a complete restoration in 2010 to be subsequently sold in mid-August 2013 for $473,000, a real deal for such a piece of Lamborghini history, I’m sure over the last decade or so, the value has doubled already.

The Lamborghini Miura was built between 1966 and 1972, first as the P400 model (350 bhp, 275 units), from 1969 onward as the more powerful P400 S model with 370 bhp, and from 1971 on we got the most interesting version, the Lamborghini Miura P400 SV, for Spinto Veloce, now with 385 bhp, but sadly only 150 units of the latter were built, making it the most sought-after, and most valuable of the series (apart from the special order SVJ models), rumor has it when the Lamborghini Countach prototype was unveiled at the 1971 Geneva Motor Show, and Ferruccio got overwhelmed by the interest for that futuristic yellow supercar, he decided not to order too many Miura bodies from Bertone, and instead focused on the development of the Countach.

Sadly this meant only 150 units of what is considered to be the best Miura iteration of them all would be built, and production was halted in 1972, while it would take Lamborghini another two years to get the Countach LP400 ready for sale by 1974, I’m sure that if Ferruccio had decided to keep the Miura SV in production until 1974, we would have seen many more units, but now the entire Miura production totaled at less than 1,000 units, and one of the most valuable Lamborghini in history is in fact the one-off Miura Roadster, valued at $10,000,000 back in 2013 by renowned Hagerty Insurance.

And now we get Chris Harris from Top Gear doing a tribute to the Lamborghini Miura in his latest video, asking himself if the Miura is the greatest Lamborghini of all times: