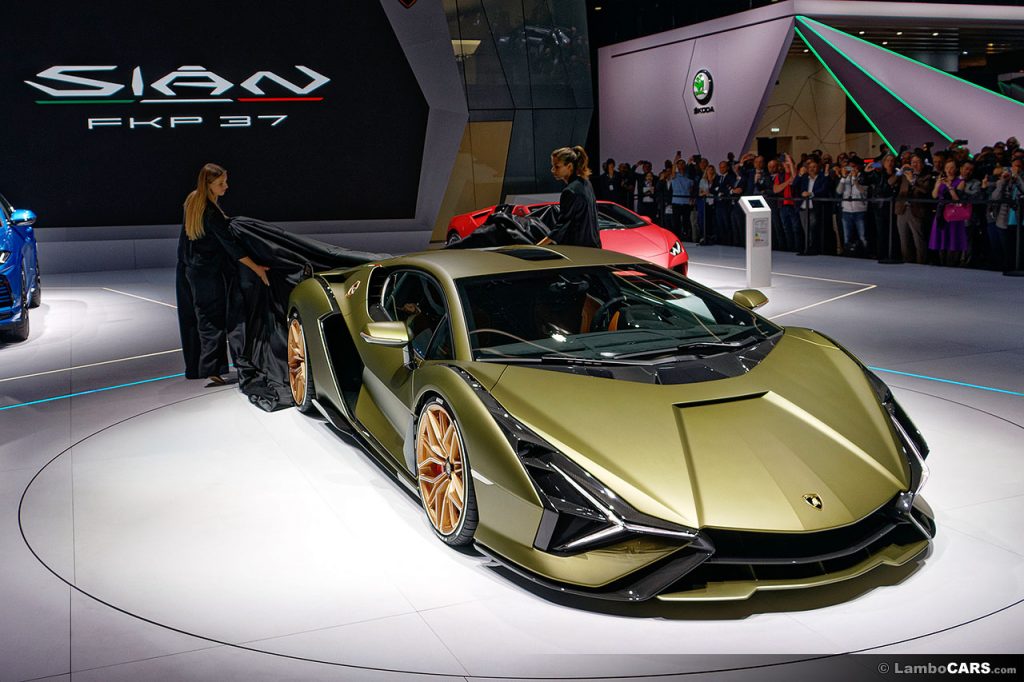 I was fortunate enough to be present at the official unveiling of the Lamborghini Sián FKP37 at the 2019 IAA in Frankfurt Germany, seeing the Verde Gea coupe was just amazing, rubbing shoulders with some of the future owners of this very first, albeit limited, Lamborghini hybrid was an experience of a lifetime, but it would take a long time before the first customer cars would be delivered to their happy owners, as every single unit of the 63 Sián that would be sold was a bespoke build by Lamborghini’s in-house Ad Personam department, the intention was to create 63 different cars, not a single one would be the same as another one, at a list price of $3,600,000 you would think this was all-inclusive, but I learned that you could go really wild with options that would drive the price well into the $4,000,000 range. With only 63 units of the Lamborghini Sián available, despite the rather steep price, they were sold out before the public even saw the car in real life, and later Automobili Lamborghini SpA unveiled the Sián Roadster, but this time just 19 units would be made, as an homage to 1963 being the year Automobili Lamborghini SpA was founded by the late Ferruccio Lamborghini, rumor had it the Roadster was available at the same price as the Coupe, and just as with the Veneno Roadster and Centenario Roadster before her, the Sián Roadster didn’t have any kind of roof whatsoever, this was again a true Barchetta, meant to be driven topless all the time.

With the production of the Lamborghini Aventador coming to a halt recently, remember the Sián is based on the Aventador, and the fact we’ve been seeing the new Lamborghini Countach LPI800-4 being road-tested as we speak, it shouldn’t come as a surprise the very last Lamborghini Sián, a Roadster, has just been delivered to her lucky owner, in a post on March 12 by Mitja Borkert (@mitjaborkert) on Instagram, he confirms the final unit left the factory floor, finished in a stunning Verde Selvans that fades into clear carbon fiber towards the rear over a Nero and Verde interior, the car looks absolutely beautiful, in fact, the clear coat over the visible carbon fiber was infused with green glitter for an over more impressive effect.

Keeping in mind the entire Centro Stile was involved in each and every unit of the Lamborghini Sián, all of the 63 coupes and the 19 Roadster, it must have been a special day seeing the last one driving away with the proud owner behind the wheel, Mitja even stated it was like seeing a child going out into the world, and one sentence in his IG post really caught our interest … Mitja states that one day, all 63 Sián Coupe and all 19 Sián Roadster will reunite to create a color explosion, I for one can’t wait for that to happen … perhaps at the 60th anniversary in 2023?

I just couldn’t resist creating this car in our Virtual Car Configurator, or at least how I think she looks, as I didn’t have any real interior photos to go by, but if she looks like the renders below, I’m sure she’s an absolutely stunning car in real life, also, keep in mind you can still create your very own virtual Lamborghini Sián Coupe, Sián Roadster, Huracán STO, or Countach LPI800-4 in our Virtual Car Configurator, but for now, enjoy my renders on the final Lamborghini Sián Roadster to leave the factory in Sant’Agata: