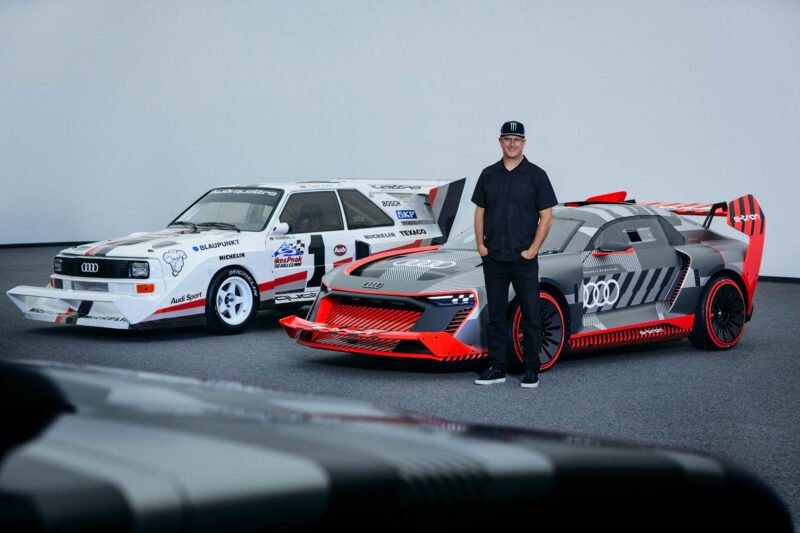 The partnership between Audi and Ken Block is much more than just an upcoming Electrikhana video. In addition to that video (which we’re incredibly excited about by the way), Audi also gave Block an Audi RS e-tron GT to be his daily driver. Of course, Ken Block being Ken Block, he’s modded it a bit and it’s pretty great.

Ironically, this Audi RS e-tron GT is likely the least modified car Block owns. It wears a matte-white wrap, which is in contrast with Block’s usual matte-black wraps, but follows his white Audi Sport Quattro. It also has new wheels, courtesy of Rotiform, but, interestingly, the front wheels are different from the rears. At the back, they’re pretty standard looking six-spoke wheels but the front’s are the ultra cool Aerodiscs. Both are finished in white.

On top of the car, Block had a roof box fitted, loaded with his snowboarding gear. Block drives his cars in adverse weather conditions often; be it in Utah or Wyoming; and he therefore needs the extra gear of the roof box and more aggressive all-season tires.

The Audi RS e-tron GT is an awesome car by itself. Its dual electric motors make 637 horsepower and 612 lb-ft of torque, which makes it the most powerful car in the history of Audi Sport. According to Audi, 0-60 mph happens in just over three seconds but we’ve seen multiple tests break into the high-twos. So it’s bonkers quick, even if it isn’t quite as quick as some rivals from Tesla.

Block’s Audi RS e-tron GT is one of the coolest ones we’ve ever seen and I love that there’s some practicality to its for, with the addition of the roof box. What’s funny is that Block has barely driven the RS e-tron GT, having only hooned it on track in Germany. Now, he gets to hoon it on track here in the ‘States.