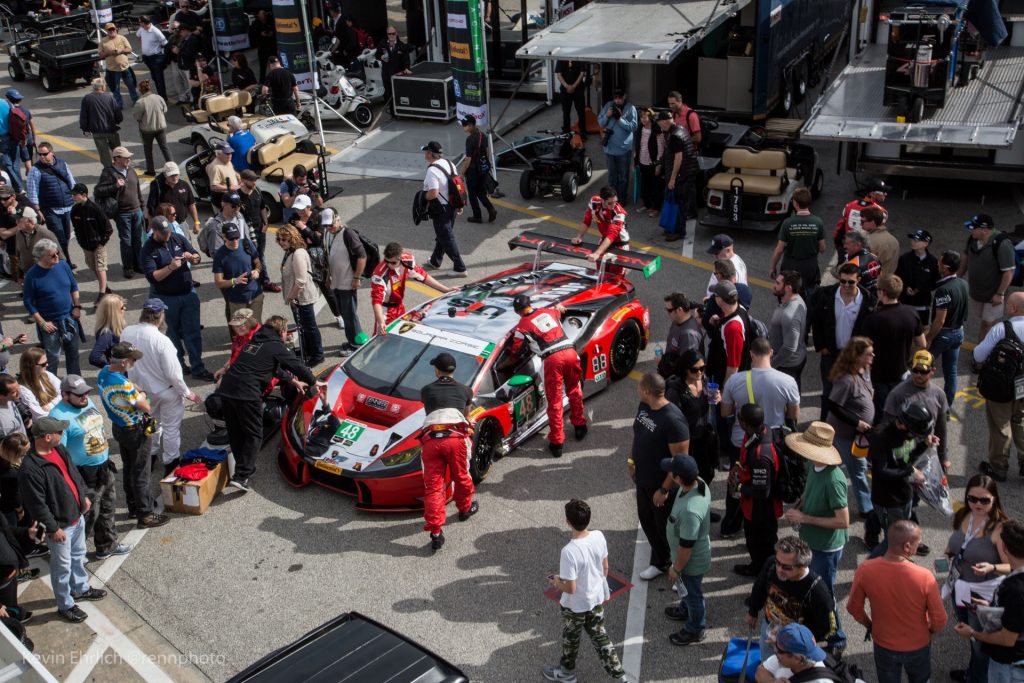 Record books fail to tell the whole story. A pure finishing order is only a snapshot. Similar to reading the last chapter of a novel, you know where the characters ended up but have no idea how they got there. The 2016 Rolex 24 Hours of Daytona is a perfect example.

Lamborghini had a taste of success but fell short in the final tally. Despite decades of exotic car pedigree, no Lamborghini had ever raced around the clock at Daytona. It was also the North American debut for the GT3-spec Huracán. And they did it during 2016—the hundred-year anniversary of the birth of Ferruccio Lamborghini, the company’s namesake founder. 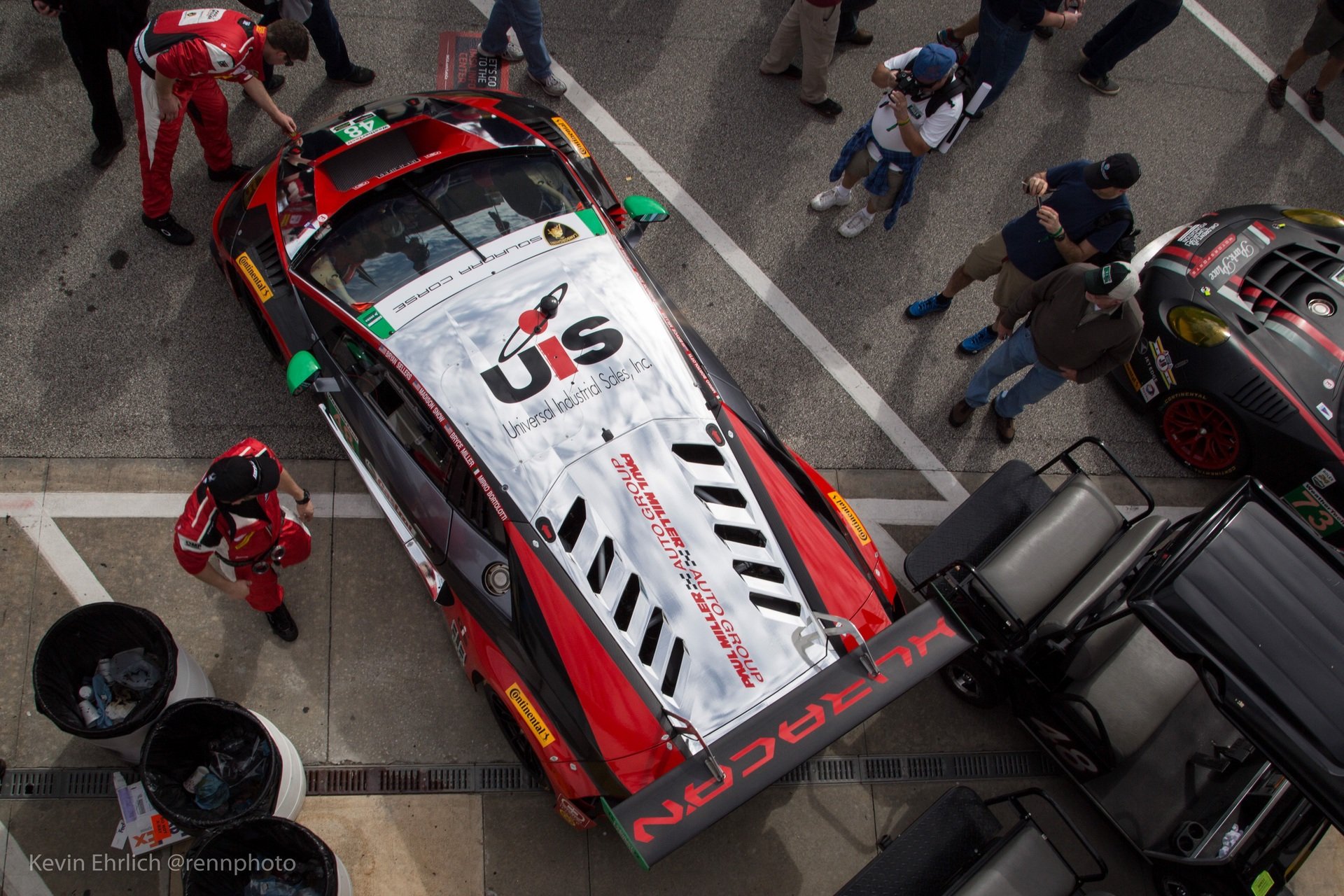 The full race entry list included 54 cars spread across four classes. The GTD class was the largest, featuring 22 sportscar entries. A mix of amateur and professional drivers participated in the class that highlighted marques such as Porsche, BMW, Audi, Ferrari, Dodge Viper, Aston Martin and Lamborghini. 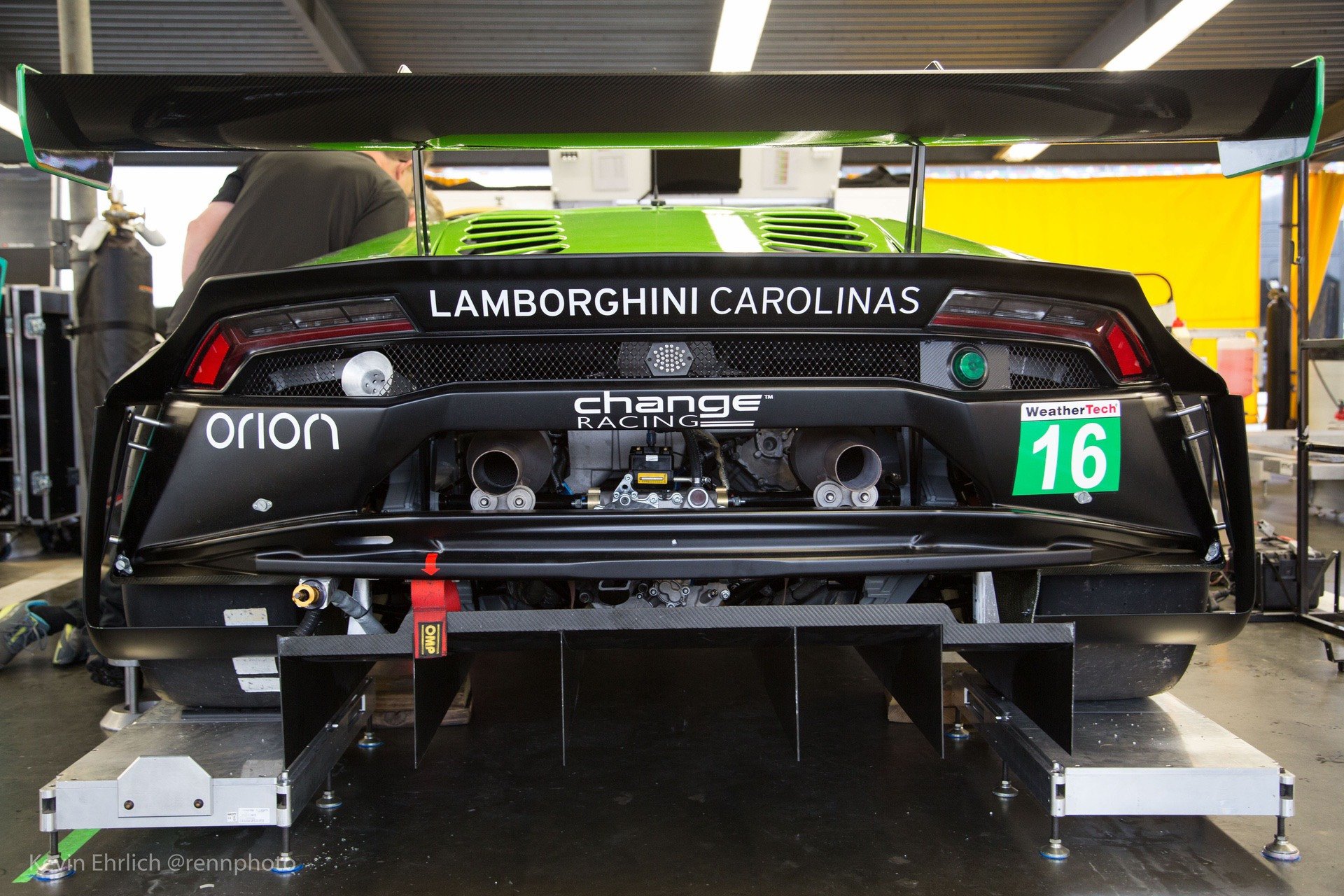 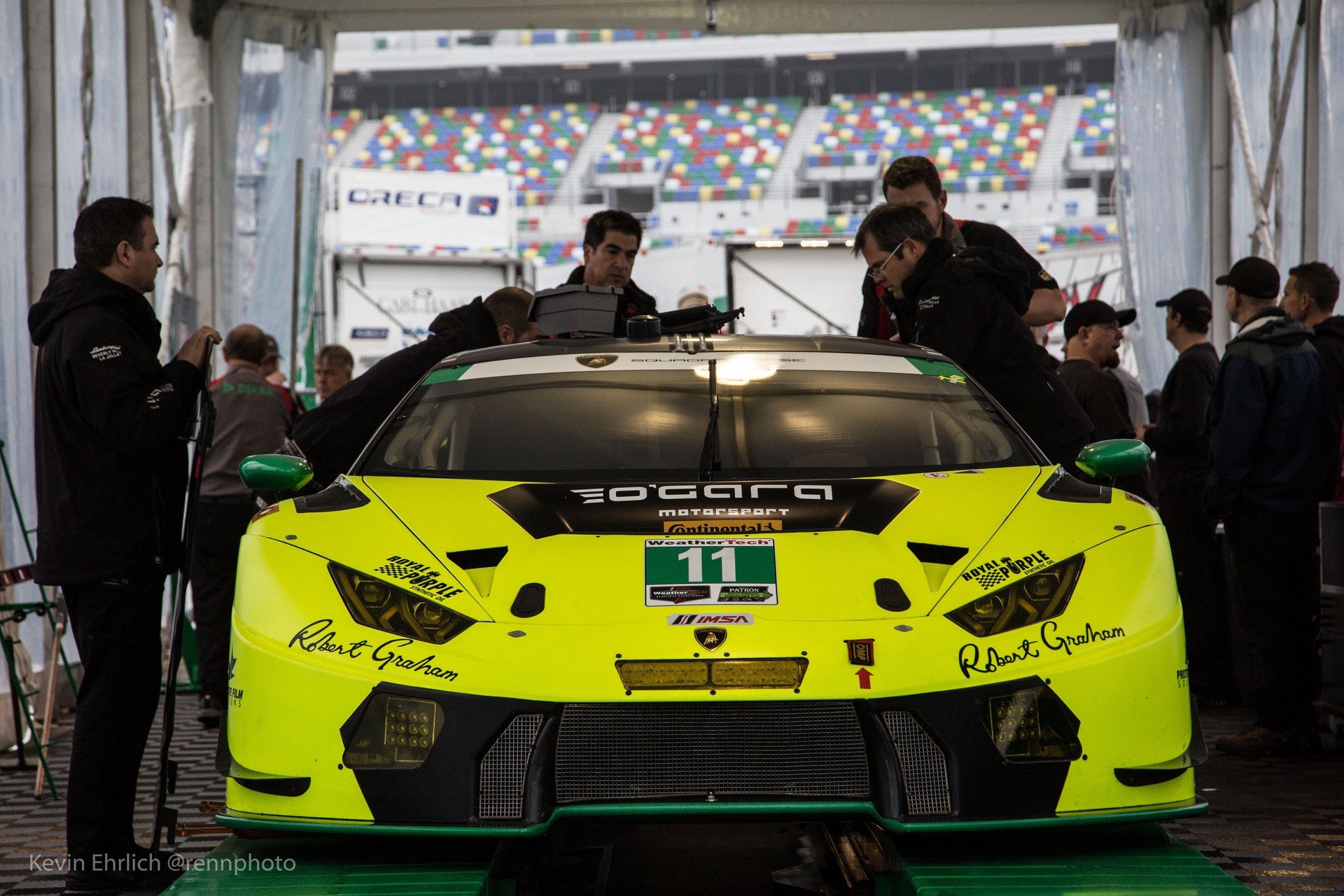 The Competitors: Lamborghini Cars at the 2016 24 Hours of Daytona

Five customer Lamborghini Huracán GT3 entries contested in the GTD class. While each ran their own race, the fortunes of the five teams were shared due to their marque of choice. The five Lamborghini teams with car numbers and drivers were: 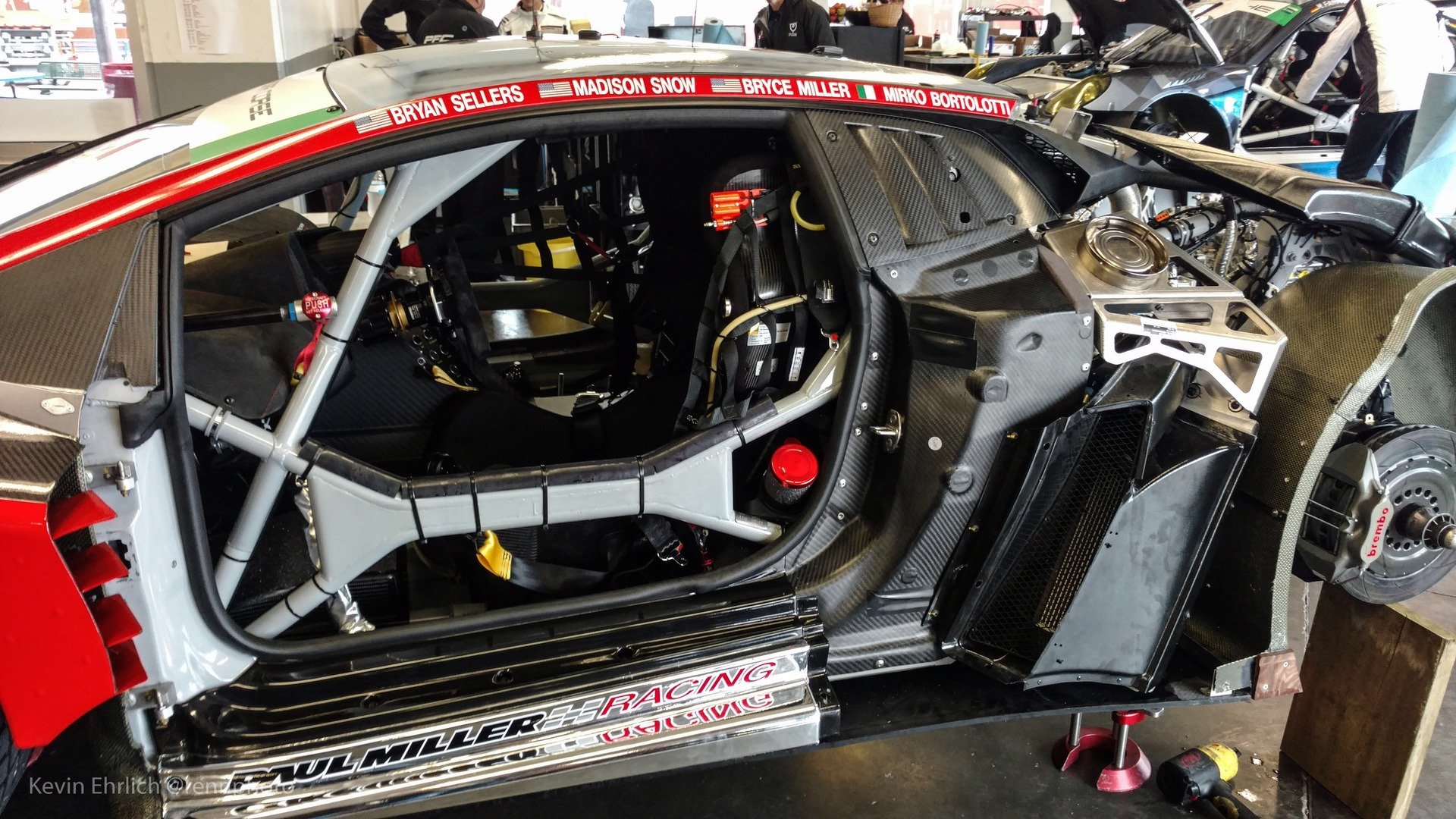 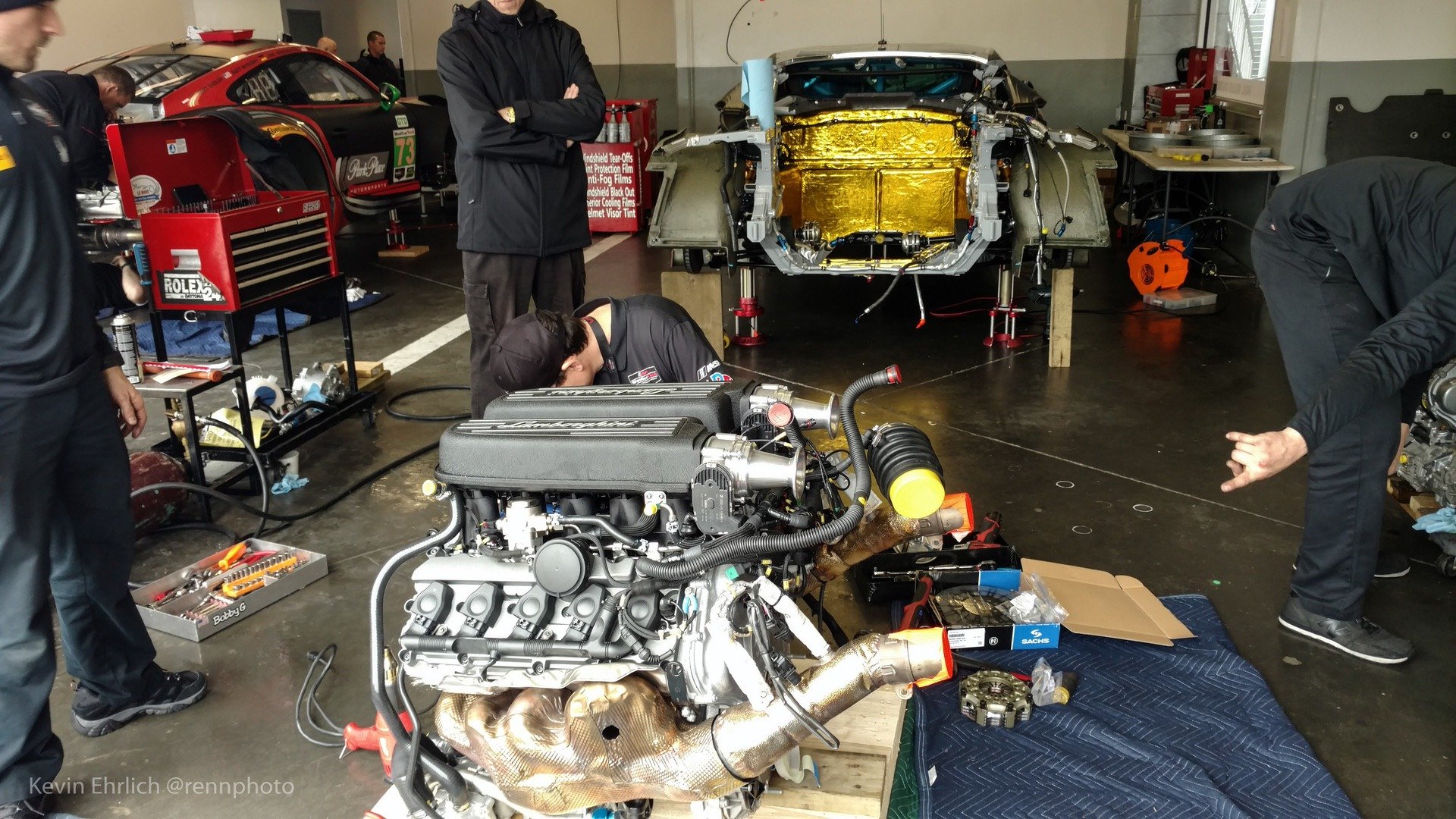 Grim Omens: A Troubled Start for Lamborghini at Daytona 2016

The drama started before the first practice session. Fresh Lamborghini engine and gearbox units arrived the day before first practice. Components and parts manuals scattered across the garage floors showed the thrash required by the crews to get ready. Those engines later became the headline story for Lamborghini’s race. 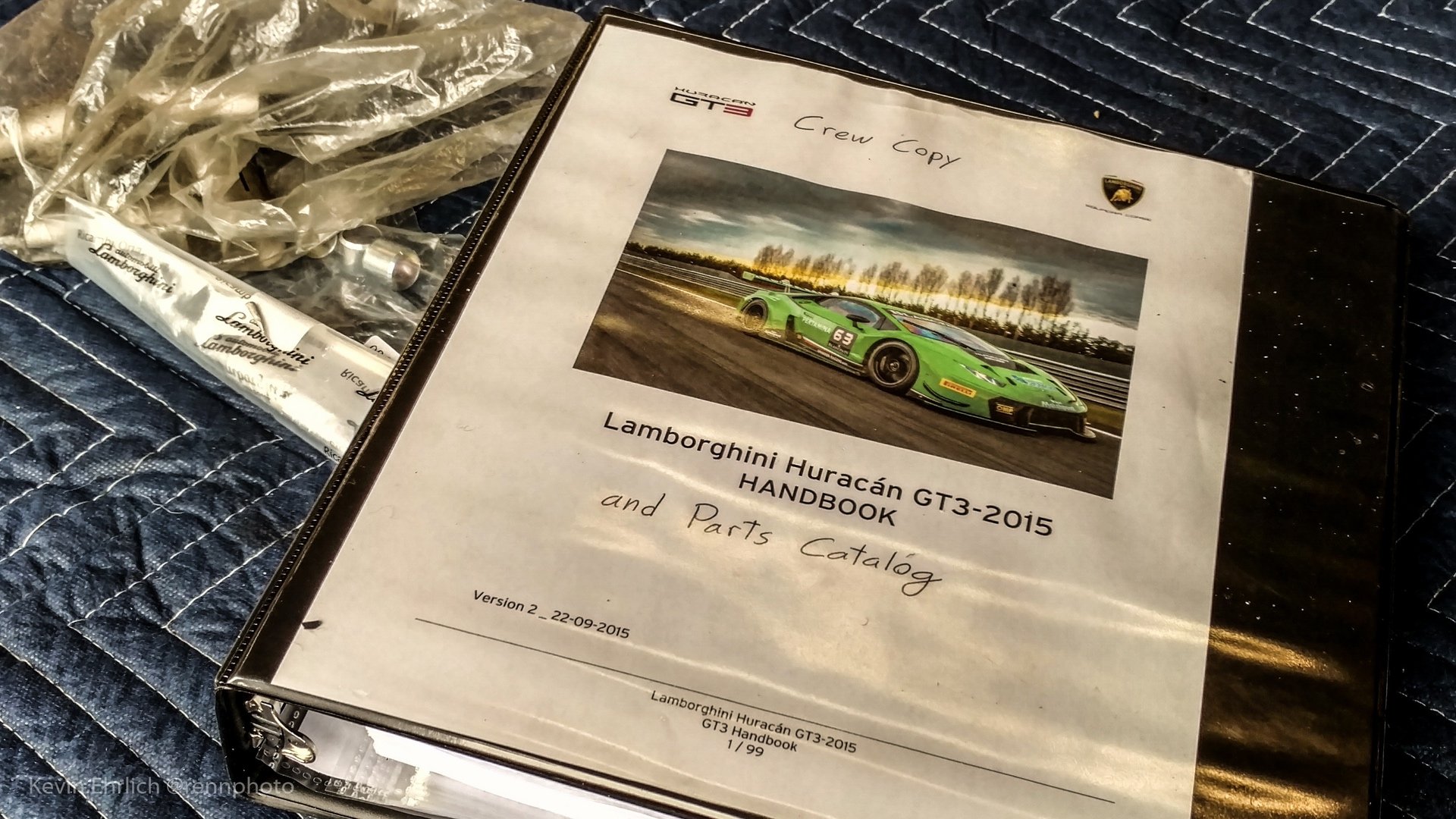 Slippery conditions plagued the first practice on Thursday, catching out the #16 Change Racing Lamborghini with less than five minutes remaining in the session. The green Lamborghini crashed against the left barrier coming up to the pit lane entry, damaging the left-side corners of the car. 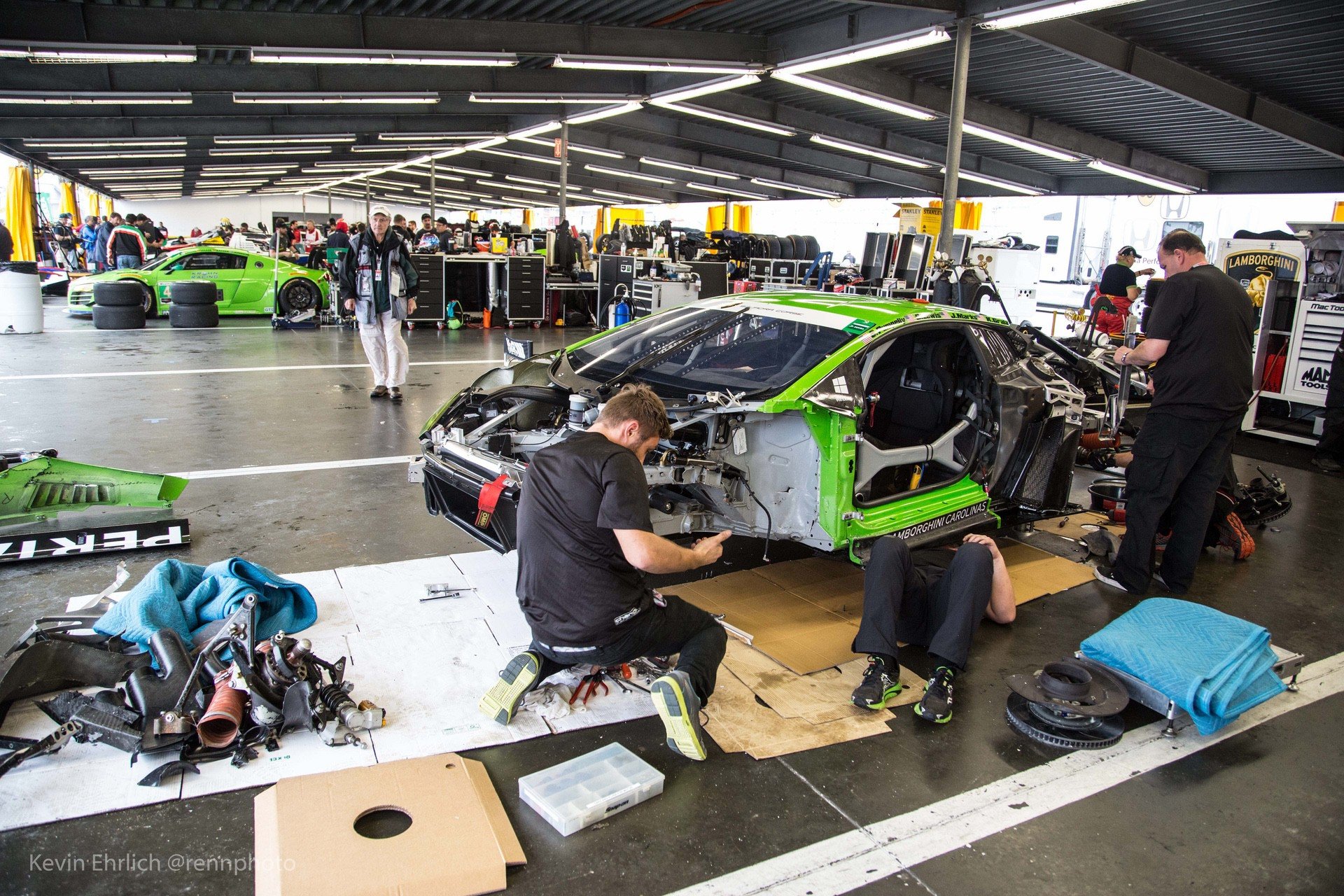 The good news was that the chassis remained straight. The bad news was that the front suspension points were badly damaged and required significant welding to fix. Repairs concluded at 2:30 am, and the #16 Change Racing Lamborghini returned to the track for Friday activity. 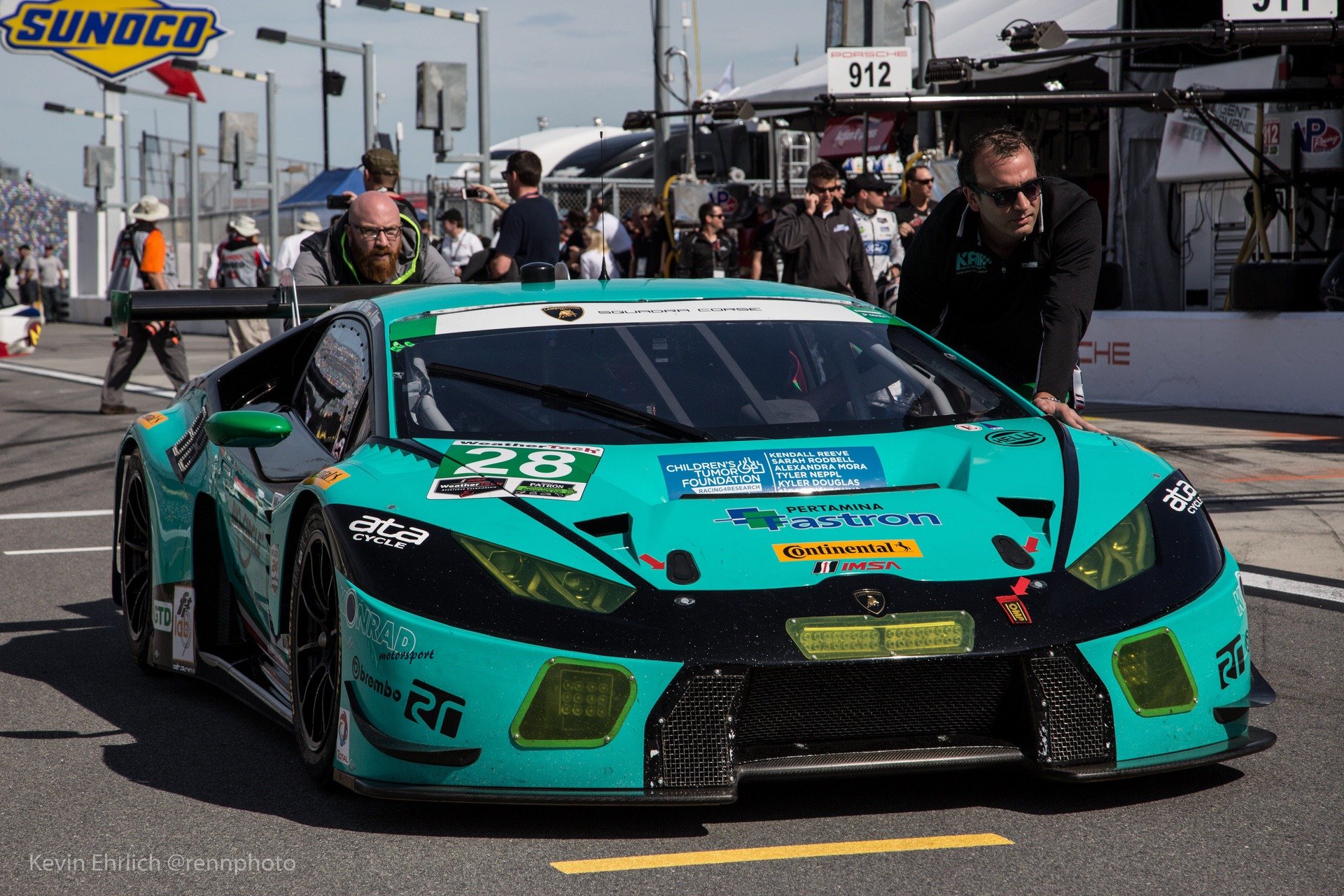 Qualifying for a 24-hour race is largely for bragging rights and press release material. While a starting position may be important for public relations or the first few laps of race action, teams often don’t prioritize qualifying times when 24 hours stand between start and finish.

The #28 Konrad car was the highest placed Lamborghini in the second starting position, with the rest of the Lamborghinis scattered through the GTD starting grid.

A large spectator crowd turned out for the start, enjoying the dry and warm conditions. In the early hours, Bryce Miller and his #48 Paul Miller Lamborghini Huracan and Townsend Bell in his fluorescent yellow #11 O’Gara Lamborghini demonstrated strength.

Disaster Strikes for Lamborghini at Daytona 2016

Just as the pair of Lamborghinis started to establish themselves at the head of the field, the #11 O’Gara car experienced electrical problems, which cost several laps to remedy. The O’Gara car eventually finished but was never able to recover enough lost ground for it to be a factor in the outcome. 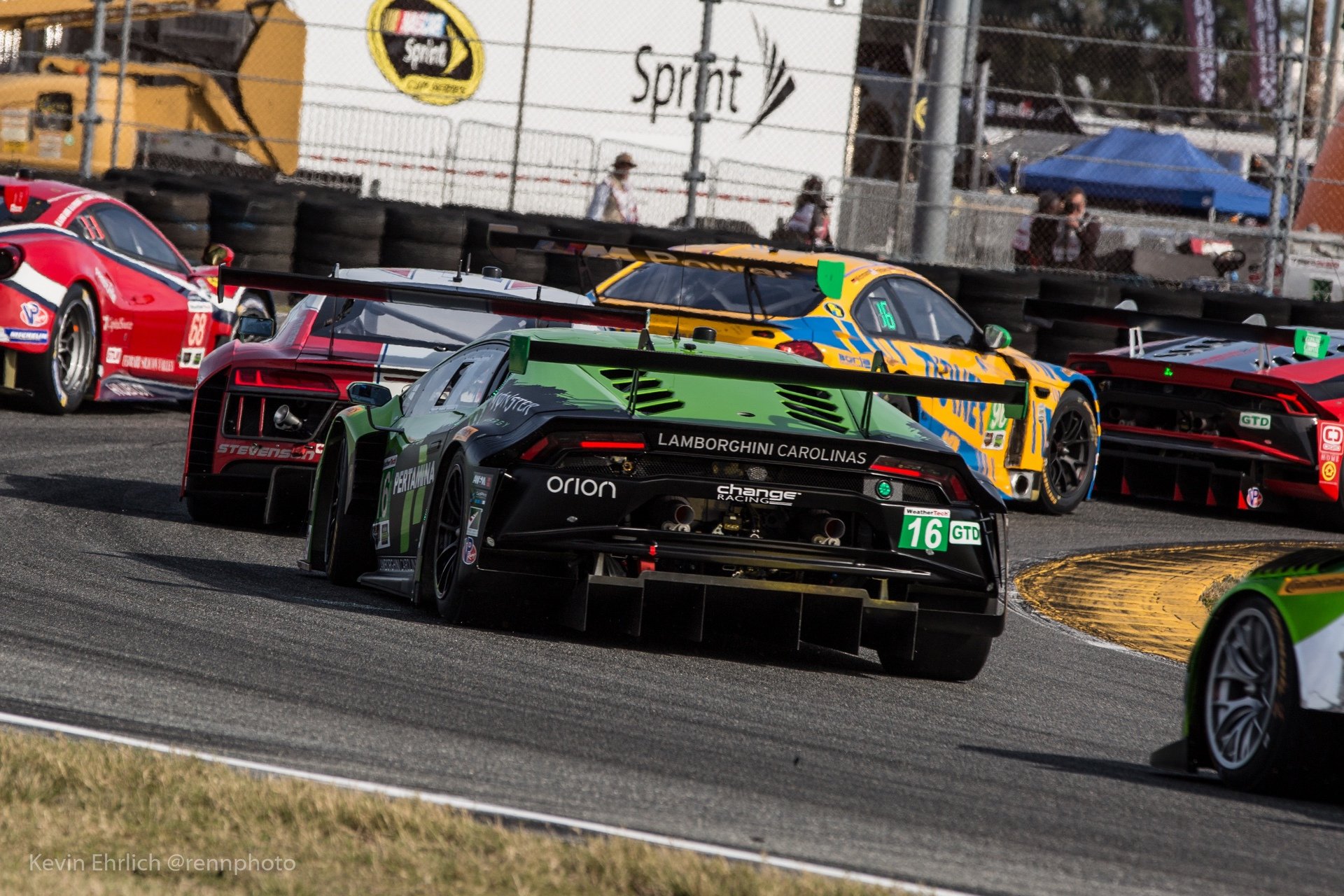 Miller and teammates Sellers, Snow and Bortolotti kept their Huracan at or near the front of the field as the race moved from day into night. It was Bortolotti’s first Daytona race (and first North American race of any kind).

Other Lamborghinis bubbled up towards the front of the field as well. The #48 Paul Miller and #16 Charge Racing cars led the Lamborghini charge through ten hours of racing. The strong run for the #16 rewarded the crew for their late-night repair work after the practice crash. 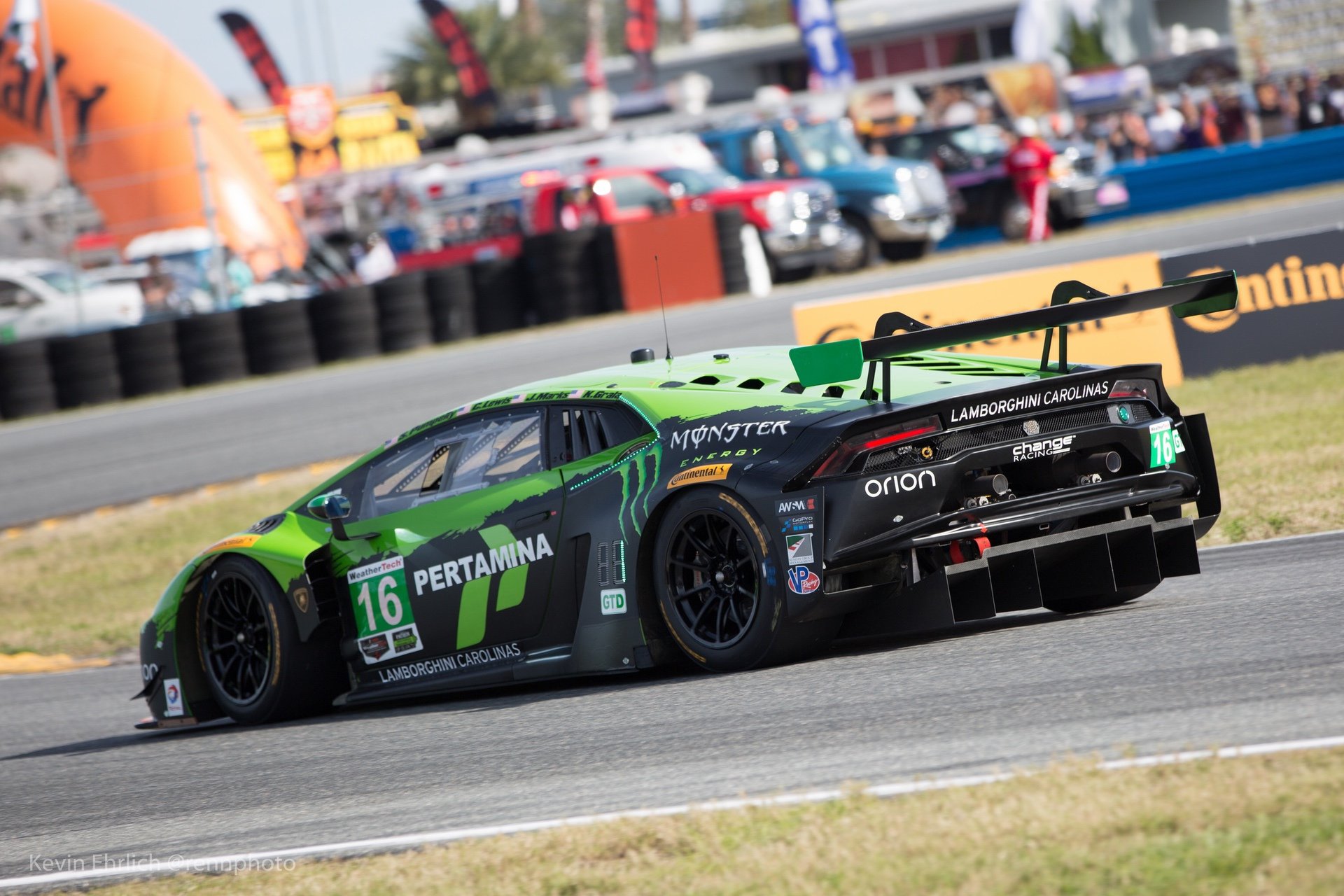 While the Lamborghinis clearly showed excellent pace, others in the field remained close. After ten hours, eleven cars remained on the lead lap with others only a lap down. However, the perils of endurance racing lurked around every corner.

In addition to the electrical problems that hampered the #11 Lamborghini, the #33 Viper had an off that resulted in right side damage, which earned it a tow back to its garage. The #96 Turner GTD BMW required repair work to remedy significant nose damage after blowing out a tire. Each was repaired and resumed. 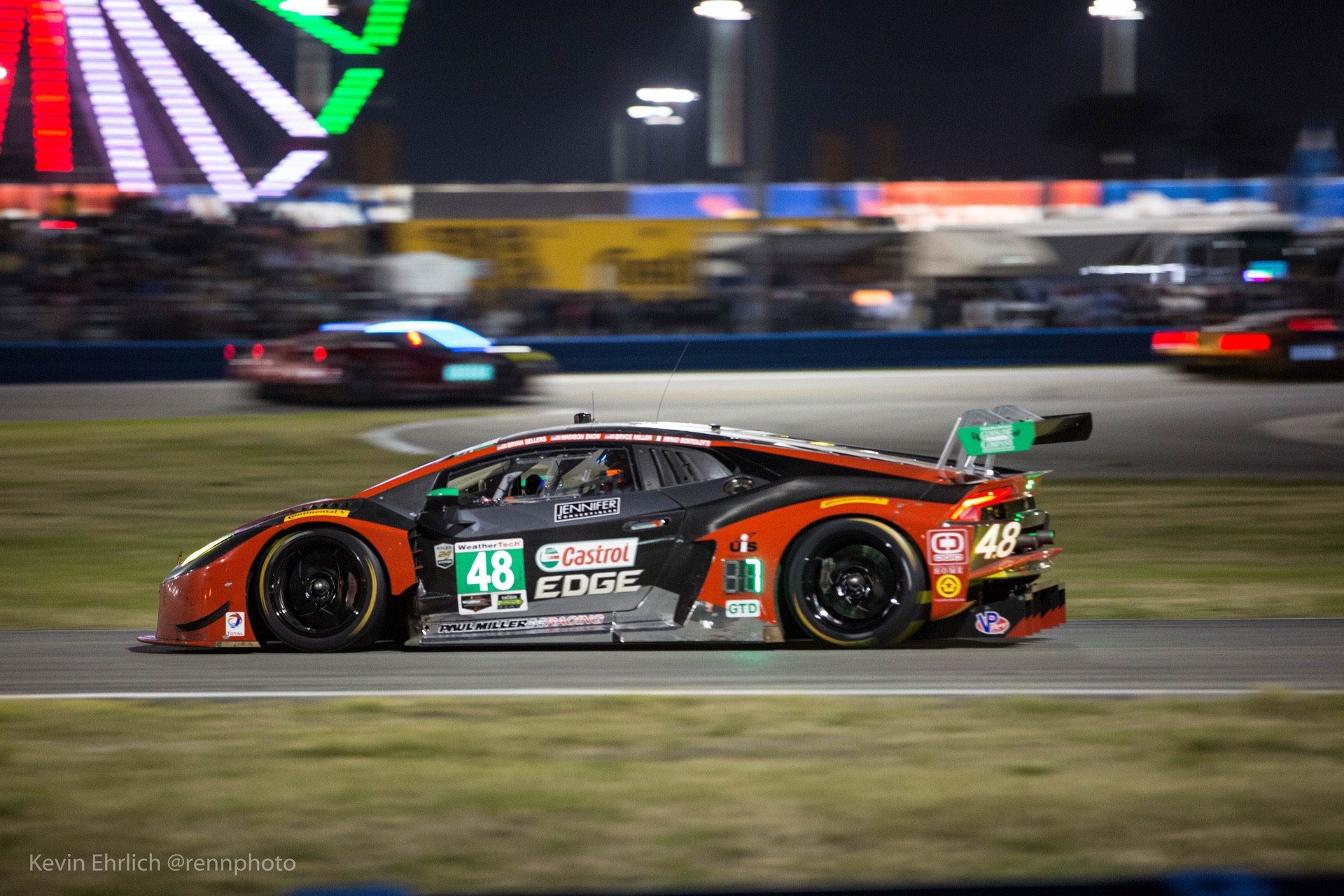 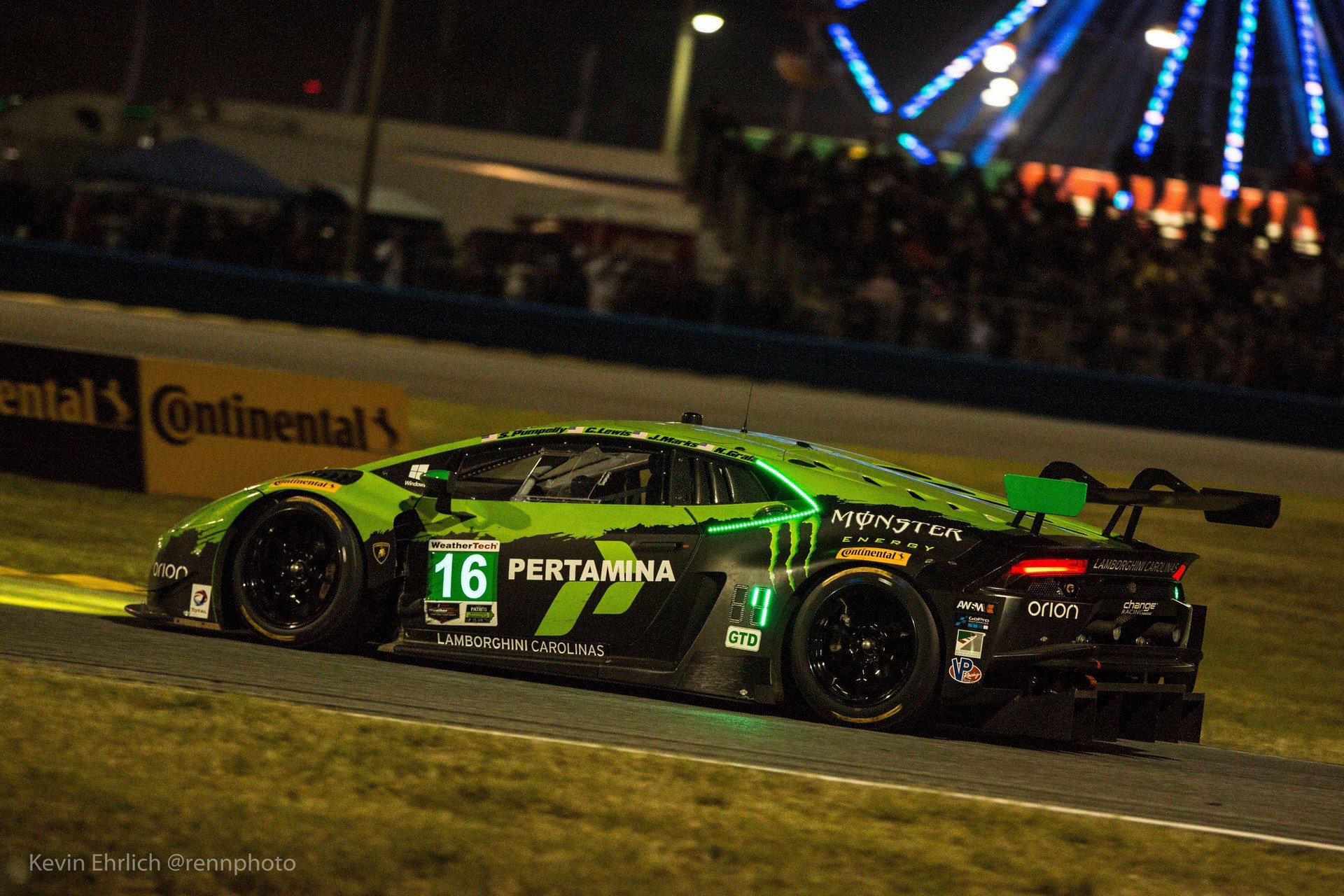 The key point in the race came in the overnight darkness at turn one. With the field compressed after a caution period, Shane van Gisbergen in his Porsche took the lead with fourteen hours to go.

Miller and Marks lurked several seconds behind in their respective Lamborghinis and gave chase. Before long, the trio fought for the GTD class lead.

Disaster struck as the two Lamborghinis passed the Porsche and then tangled on the approach to the first turn. The long black tire marks told the story of the dual spins, each leading to the inside wall.

The #16 Change Racing car crawled away slowly and returned to pit lane with left rear damage. The #48 Paul Miller car required a flatbed to make its journey back to the garage. The Porsche continued unscathed.

The #16 Change Racing crew focused on the left front and rear suspension—the same side they previously replaced after the practice crash. The #48 Paul Miller car required attention on all four corners of the car. Both crews worked to get their cars back in action, but both were effectively out of contention for the win.

With just over 13 hours to go, the highest placed Lamborghini and the remaining hope for the marque was the #28 Konrad car. It ran one lap off the lead. The #11 O’Gara car was quick, but its earlier maladies put it 18 laps off the lead. The sister #21 Konrad also encountered trouble, leaving it 31 laps behind.

The #48 Paul Miller Lamborghini re-emerged after the crew did substantial suspension surgery to their battered Huracan in the garage. Sellers returned to the race just before the 12-hour mark, having lost 39 laps in the repair process. With the dominant Lamborghinis out of the running and a dozen cars remaining on the lead lap, the opportunities for GTD class honors opened for other marques.

With under nine hours to go, an unscheduled meeting in the infield between the #007 TRG Aston Martin and the #21 Konrad Lamborghini took both cars out of the race. 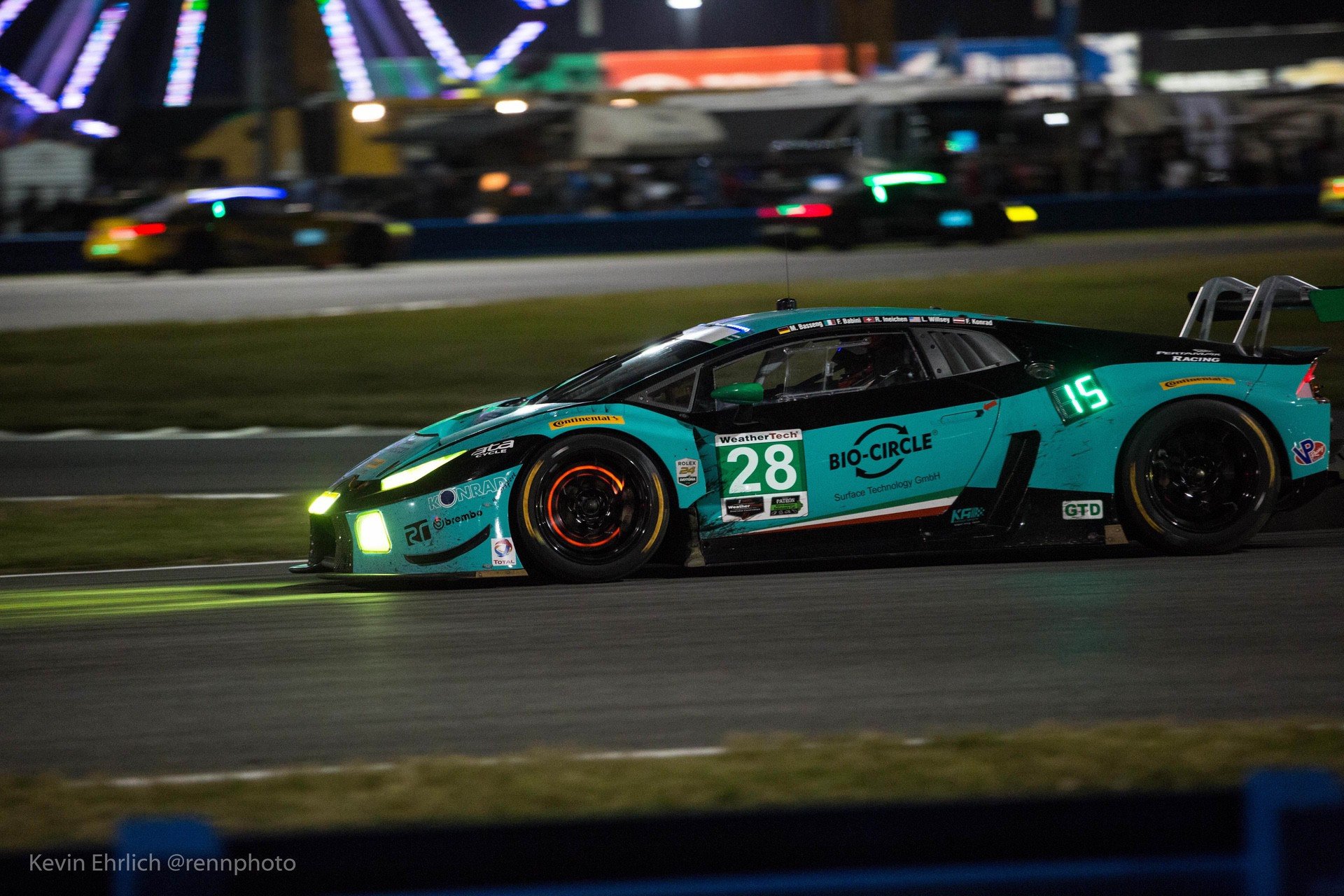 Outright speed and pit strategy finally allowed the #28 Konrad Lamborghini to get back on the lead lap with six hours to go. The chase was on.

Pit stop sequences put Babini and his #28 Konrad Lamborghini in a fuel mileage duel to the end with Rene Rast in the #44 Magnus Audi. With five minutes to go, Babini caught and passed Rast, who had dialed back his pace to save fuel.

Only two minutes later, the Lamborghini coughed and sputtered for fuel, and Babini watched Rast pull away. Babini went from the lead to crossing the finish line in fifth.

Those watching the timing and scoring details noticed that Lamborghini teams set most of the quickest laps of the race. The fastest GTD race lap of 1:45.873 was set by Antinucci in the #11 O’Gara car—1.163 seconds quicker than the nearest GTD manufacturer in the form of the race winning Audi. Despite regulatory efforts to keep similar performance capabilities across the GTD field, the Lamborghinis were clearly an outlier.

Race officials noticed. Engines were impounded and checked on a dyno. Three weeks after the checkered flag flew, penalties were imposed. Lamborghini was fined $25,000, and each team was given an extra five minutes added to their race time. The #28 Konrad car fell from fifth to tenth in class. The #11 O’Gara car dropped one position to fifteenth. The penalty made no impact for the three other Lamborghinis, given their respective troubles.

The culprit was traced to an air restrictor for the V-10 engine, reportedly an older specification than was used to set baseline performance standards. The older restrictor might have added as much as forty extra horsepower.

A Brighter Future for Lamborghini at Daytona (Eventually)

The incident did not halt Lamborghini’s racing aspirations in the US. Customer Lamborghinis continued to race, and Paul Miller claimed the first win for the Huracán GT3 in August at Virginia International Raceway.

Success at the 24 Hours of Daytona came along as well. In fact, the Paul Miller Lamborghini win in 2021 at the Rolex 24 was the fourth consecutive visit to Daytona victory lane for Lamborghini.