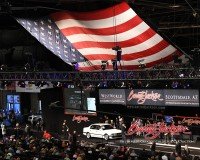 The excitement was palpable when, after two Preview Days and the annual Opening Night Gala that celebrates the beginning of Auction Week at Barrett-Jackson, the first winning bid echoed across the auction pavilion.

The action began shortly after gates opened with the Barrett-Jackson Automobilia Auction. This popular daily event shines the spotlight on rare and one-of-kind automotive collectibles, from vintage toys to antique gas pumps, glowing neon signs, vending machines and much, much more.

Collector cars dominated the afternoon, as bidders and auto enthusiasts packed the arena to view and bid on a diverse array of minibikes, motorcycles, trucks and vintage and modern-day vehicles, all selling with No Reserve. Monday’s docket represented six decades of automotive history, ranging from a 1943 Ford 1½ Ton Truck that was once a firetruck to a 2009 BMW 750Li.

Along with guests enjoying all the day had to offer, former IndyCar series race car driver Lyn St. James was also on-site taking in the auction excitement.

In keeping with Barrett-Jackson tradition, the night before the gleam of steel and chrome took centerstage, the auction pavilion was transformed into a sophisticated setting for Sunday night’s Opening Gala. Bidders, consignors, sponsors and invited guests enjoyed a great night of gourmet food and live music. Dallas-based Emerald City Band kept the dance floor packed with their high-energy blend of jazz, soul, funk and pop music, and actor Neal McDonough, known for his roles on HBO’s “Band of Brothers,” “Suits” and “Desperate Housewives,” surprised Gala guests when he took to the stage for a rousing harmonica performance.

Enjoy today’s gallery of images from around the auction site and the recap video from the Opening Night Gala.

Actor Neal McDonough goes for a spin on the Barrett-Jackson Performance Track with Dodge Thrill Rides.

Actor Neal McDonough and Barrett-Jackson Chairman and CEO Craig Jackson check out some of the supercars heading to the auction block in upcoming days.

The 2022 Barrett-Jackson Collector Car Auction kicks off with a performance of The Star-Spangled Banner.