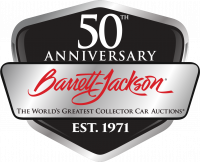 SCOTTSDALE, Ariz. ‒ January 20, 2022 – Barrett-Jackson, the World’s Greatest Collector Car Auctions, will kick off its 50th Anniversary celebration at WestWorld of Scottsdale, January 22-30, by partnering with the Driven Project to provide “supercar therapy” to more than 20 children and their families battling serious illnesses and heavy life challenges.

On Saturday, January 22, more than 20 VIPs (Very Important Passengers) and their families will arrive at WestWorld to help kick off Barrett-Jackson’s QT Family Day. Awaiting their arrival will be Barrett-Jackson representatives, more than 20 supercars and Driven Project volunteers led by founder Kevin Gordon. Shortly after their arrival, the VIPs will embark on a police-escorted supercar adventure, riding in everything from Lamborghinis, Ferraris, and McLarens. The convoy will parade around North Scottsdale before returning to Barrett-Jackson where the cars and kids will conclude the ride crossing the world-famous Barrett-Jackson auction block. Each child will receive a hero’s welcome upon their return, being announced and celebrated on the stage in front of their family and friends.

“We’re excited to partner with the Driven Project and to host these children and their families as we kick off our 50th anniversary,” said Craig Jackson, chairman and CEO of Barrett-Jackson. “Giving back to the community has been at the core of Barrett-Jackson since the company was founded more than five decades ago. My wife and I recently had the pleasure of participating in one of the Driven Project’s events and we were blown away by the smiles and excitement on the faces of these children and their families.”

The Driven Project was founded by Gordon in 2018 in Vancouver, Canada, with one goal in mind: to provide “supercar therapy” to children battling heavy life challenges. Partnering with local organizations and supercar owners, the Driven Project provides these amazing children with an adrenaline-filled escape from reality, a boost to help them stay strong through their battles, and an opportunity to create memories they will cherish forever.

“What the Driven Project is doing for children in our community and communities across the U.S. and Canada is nothing short of incredible,” said Carolyn Jackson, Vice President of Brand Strategy for Barrett-Jackson. “After participating in a Driven Project event as part of Cody Walker’s Fuel Fest, we knew that we wanted to work with the Driven Project to create a once-in-a-lifetime experience for children to kick off our 50th anniversary celebration.”

At 8:15 a.m., the VIPs will get in the passenger seats of the supercars at WestWorld and take off in their police-escorted supercar convoy before returning to cross the world-famous auction block at approximately 8:40 a.m. All guests in attendance are invited to the auction arena to take in all the excitement and to show their support for the VIPs at the same time.