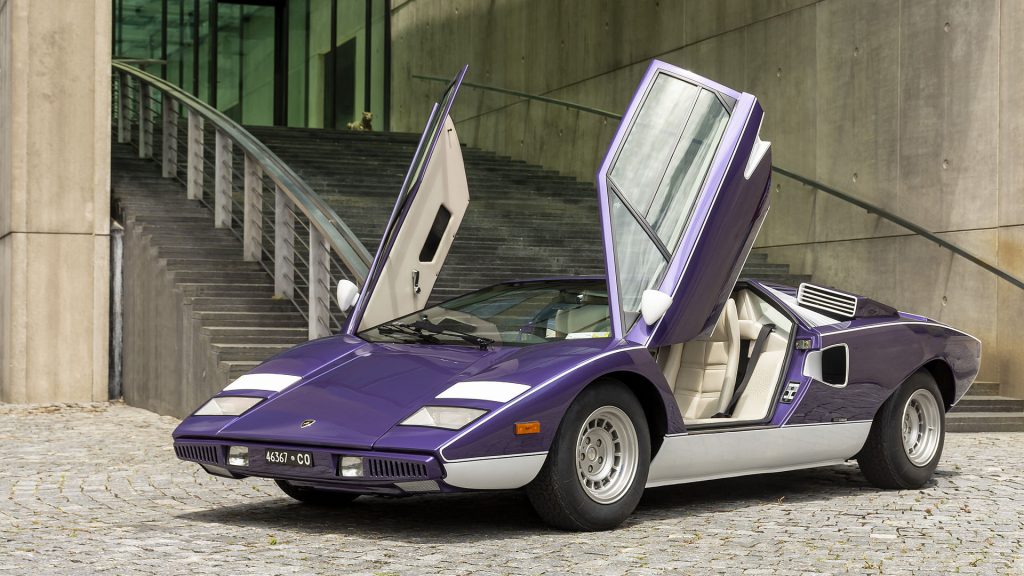 This purple lady is 45 years young at the time of writing, she’ll turn 46 later this year, but you have to admit she is still a looker, despite the somewhat ‘special’ paint scheme. Make no mistakes, this is one of only two Lamborghini Countach LP400 finished in Viola Salchi over a Bianco interior, but she’s the only one with the special touches of white on the exterior, a bespoke order by the client who ordered this beauty back in the Seventies.

Chassis number 1120238 was delivered through the well-known Achilli Motors dealership in Milan, the first registration was done on December 21, 1976, this specific Lamborghini Countach Periscopica was ordered as a birthday present for Princess Dalal Alsaud of Saudi Arabia, a gift from her husband at the time, and as purple and white were her favorite colors, this present boasts that color scheme.

The Lamborghini Countach was then taken to the Royal Family home in Riyadh, Saudi Arabia where this special Bull was parked next to a white Ferrari 400, only to be sold again in a matter of years, by late 1979 the car was imported into the United States of America by a California based businessman who would own the car for the next four decades.

Over time the rather wild Viola Bianco color scheme got old, and the owner decided to have the famous paint shop Juniors House of Colors repaint this rare Countach to black, which would have looked amazing I guess with the white leather interior, do note white leather will take some serious maintenance to keep it clean, you might not want to wear too many blue jeans with these seats if you know what I mean.

During his ownership, both the engine and drivetrain were rebuilt over a period of three years between 2010-2013, but he decided to part with this lady around 2019, the car changed hands for the second time, now with 54,571 km on the counter, this Countach is again for sale by the third owner, but today this very special Lamborghini Countach LP400 Periscopica is back to her original 1976 factory specifications.

Once again boasting the stunning Viola Salchi over Bianco color combination, and yes, the Bianco details on the exterior have been resurrected, making this one of the most eye-catching and outrageous early, narrow-body Lamborghini Countach in existence, and while she’s listed for sale, the price is on-demand, and I would think this one will be well into the 7-figures to acquire keeping in mind this is a matching numbers Periscopica that could be admired on the lawn at Pebble Beach Concours d’Elegance in 2021 in the 50th Anniversary of the Lamborghini Countach class S-02.

Today the different Viola shades offered by Automobili Lamborghini SpA are back in fashion, Viola SE30 made a come-back in 1993 already on the Diablo SE30, and today we’ve seen several Aventador and Huracán models being specced in that shade, but also Viola Pasifea is popular, or how about Viola Bast or the very dark Viola Aletheia … its clear purple is very much in fashion, so if you would like to know more about this classic Countach, and perhaps want to make an offer, then get in touch with MM Garage who is offering this one for sale at the time of writing.

The listing even shows an old photo from the Seventies when this car was original, before repaint or restoration … and if you look closely at the interior, it’s clear why white looks amazing, but isn’t easy to maintain:

The post Viola Salchi, a rare color on the Countach LP400 appeared first on LamboCARS.