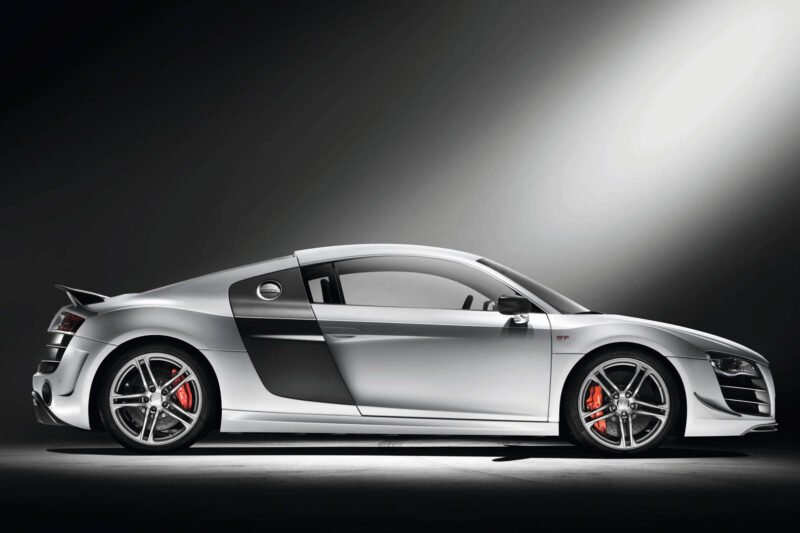 Recent reports claim that Audi is currently working on a more hardcore variant of the R8 supercar, to give it one last hurrah before it’s killed off entirely. Such a car would be something along the lines of a Porsche 911 GT3; sharper, lighter, more aggressive, and more track focused. It could potentially even be more aggressive than the first-gen Audi R8 GT, which was loved by fans and customers. Some recent spy photos may have spotted this potential hardcore Audi R8, doing some winter testing in the snow. (We don’t own the spy photos but they can be seen here)

In these photos, the red Audi R8 V10 is seen without any camouflage but with a ton of added aerodynamic parts. A large fixed rear wing, a massive rear diffuser, a deep front lip spoiler, and even front canards all combine to make this Audi R8 test mule look surprisingly track-focused. Its suspension also seems to sit lower than the standard car’s, adding a bit more athleticism to its look. It actually looks very much like the first-gen R8 GT did.

If this is a more hardcore, GT3-like Audi R8, it might also be rear-wheel drive. Cleverly spotted by Motor1, the front wheel arches don’t seem to have much snow build up, while the rears have quite a bit. If it were an all-wheel drive model, it would likely have a bit more evenly distributed snow build up. Of course, the R8 Quattro is rear-biased, so it uses its rear wheels more anyway, but it would likely be using its front wheels more often than usual in the snow. So that’s a good spot by the team at Motor1.

A rear-wheel drive Audi R8 GT (or whatever name the brand might go with) would be an awesome way to send the brand’s only mid-engine supercar out. The R8 has been an icon for the brand since Tony Stark first drove it on the silver screen, back in 2008. As necessary as it is to kill the R8 off for something electric, we’re gonna be sad to see it go. Thankfully, a more track-focused version should ease the sting a bit.