Audi is certainly getting its money’s worth out of Ken Block so far. Since the announcement of their partnership, Block has posted several videos, showing off all sorts of history Audi race cars. Previously, he drove the Audi Sport Quattro S1 E2, the pinnacle of Audi’s rally racing career and the very car driven by Walter Röhrl. He then drove a secret Audi prototype rally car, one that never actually ended up racing and that only five people had previously driven. In his latest video, he drives one of Audi’s lesser known, but equally awesome, DTM cars — the Audi V8 DTM.

Based on the Audi V8 of the early ’90s, the precursor to the A8 sedan, the Audi V8 DTM was a killer touring car. Except, unlike the road car, the DTM car’s 3.6 liter V8 made 463 horsepower and revved to a flat-out bonkers 11,500 rpm. During that same time, BMW and Mercedes-Benz were running four-cylinders in DTM and here comes Audi with a screaming 11,500 rpm V8. Just bonkers.

While the Audi V8 DTM wasn’t as successful as its German rivals, it was still successful in its own right, winning two titles with Hans-Joachim Stuck and Frank Biela at the wheel. It was also a great car to drive, with both Stuck and Biela loving the car.

Block loved it, too. In this video, he rips it around Audi’s test track and it sounds absolutely incredible. It also looks surprisingly agile, with seemingly sharp turn-in, and nice balance. Obviously, I can’t know that for sure as I’m not a mega-star like Ken Block, so Audi won’t let me drive such a car. However, Block seemed to love it. 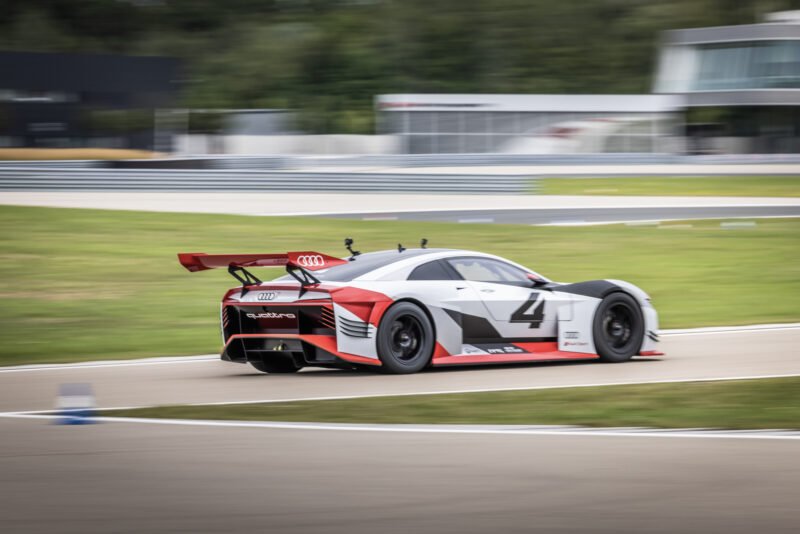 The Audi V8 DTM wasn’t the only car he drove on that day, though. After driving the ’90s DTM car, he heads over to Audi’s test facility in Neueburg, to drive the Audi e-tron Vision GT, the prototype electric race car built as a one-off to coincide with the digital Grand Turismo car. It packs over 800 horsepower from three electric motors; one at the front and two at the back. It’s seriously quick and entirely different from the previous DTM car.

This video is the last from Block’s trip to Ingolstadt but it’s not going to be his last video with Audi. The four-ringed brand is working with Block on something special and we’ll find out exactly what that is whenever they put out another video.