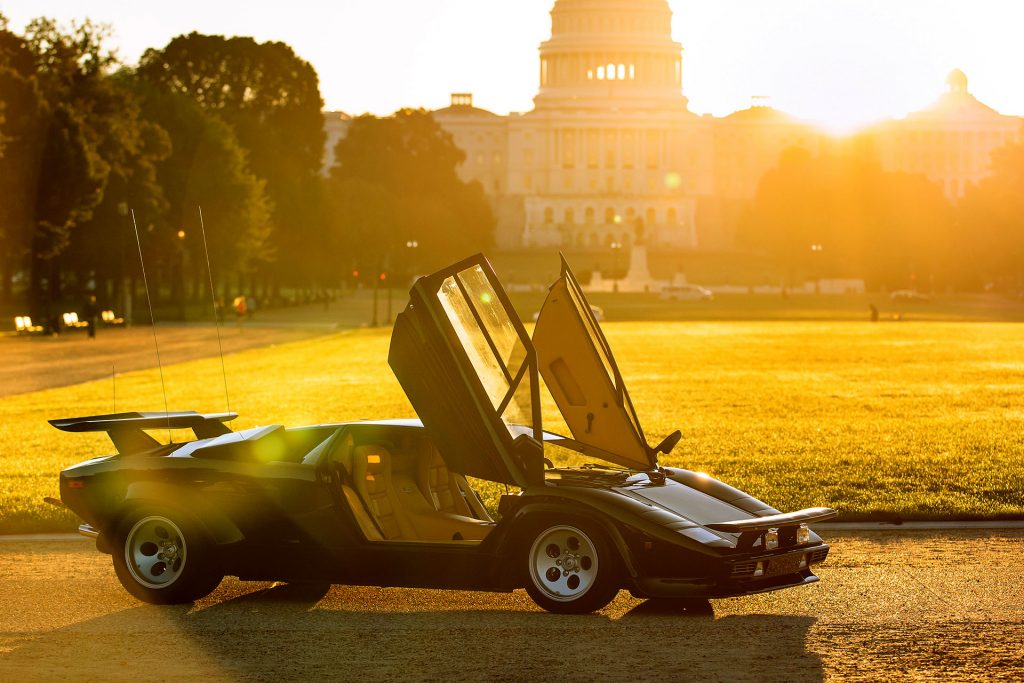 Today we have movies like the Fast and Furious franchise or the Need for Speed film we can watch on our cellphone, tablet, or the comfort of our own home, but back in the early Eighties, car enthusiasts like us were glued to our seats in the movie theatre to see the Cannonball Run with famous actors like Burt Reynolds, Jackie Chan, Roger Moore … and let’s not forget Farrah Fawcett, but probably the biggest star of the movie was shown during the long opening scene of this 1981 movie: a sinister-looking black Lamborghini Countach. While the movie poster showed the Countach S in red, the actual car in the movie, chassis number 1121112, was a black 1979 Lamborghini Countach LP400 S, originally delivered to SEA Auto, the Lamborghini distributor for Rome, Italy, who almost immediately had the car exported to the United States of America. This black over mustard yellow Countach S ended up with her first owner in Florida, a close friend of Hal Needham … and the latter would make this Countach unforgettable, this Raging Bull was set to make history.

Back in the early Eighties, the speed limit in the United States of America was set at 55 mph (or 88 km/h), which isn’t much, let’s face it, so Brock Yates gathered a number of car enthusiasts to race across the US from East to West in the least amount of time … naturally, that meant breaking the speed limit just about constantly, but police enforced the limit rigorously, so the drivers had to be inventive on the roads between downtown Manhattan in New York and a marina on the Pacific Ocean at Redondo Beach in California. 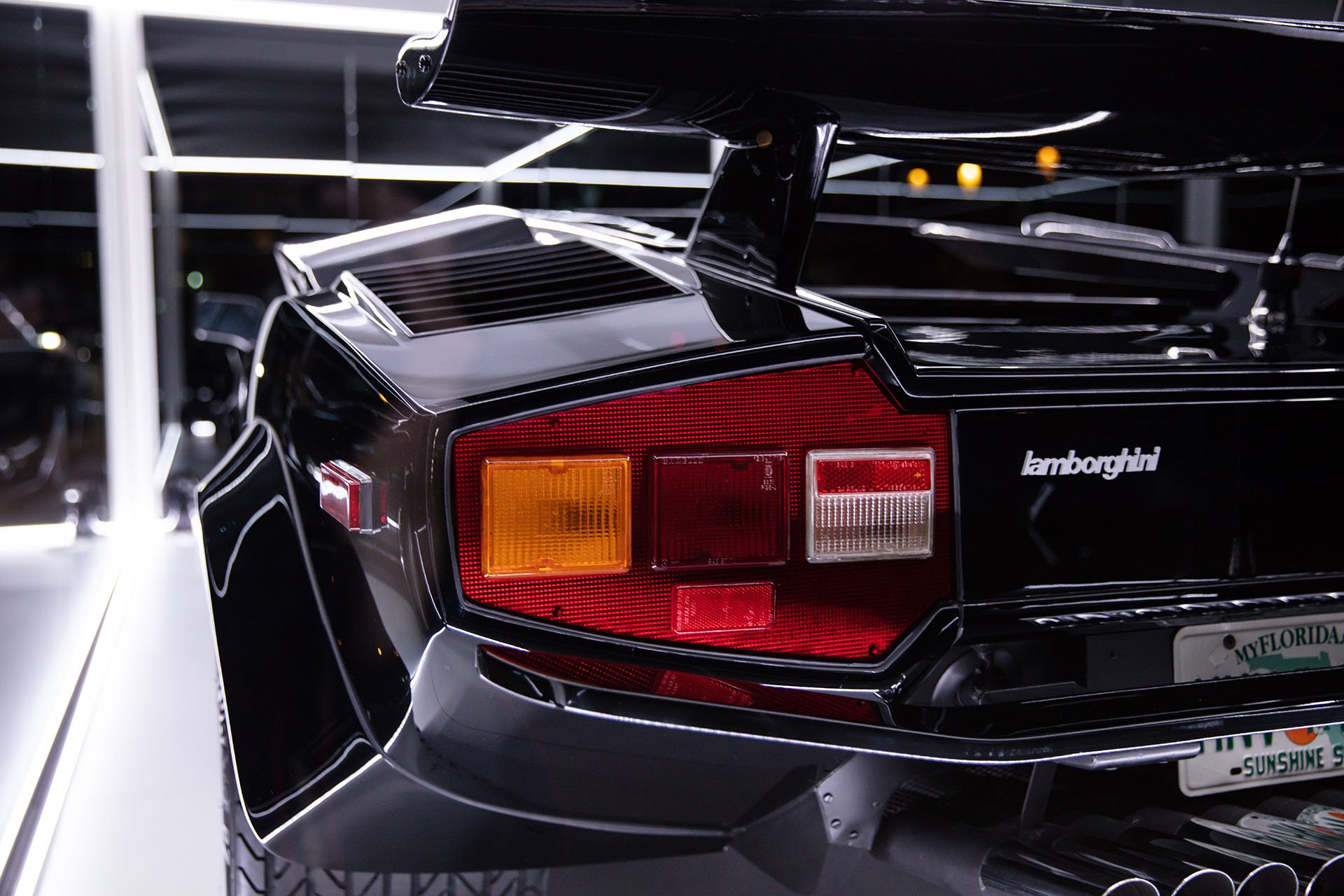 This illegal race caught the attention of Hollywood screenwriters who saw an interesting opportunity to put together a fictional plot where famous movie actors of the time would compete against each other behind the wheel of some of the most iconic cars of that era, and with a release date of June 1981, what car would be more iconic than the Lamborghini Countach, more so the latest model, the LP400 S with her wide wheel arches, massive rear wheels, the big rear wing, and those iconic, upward-opening doors. 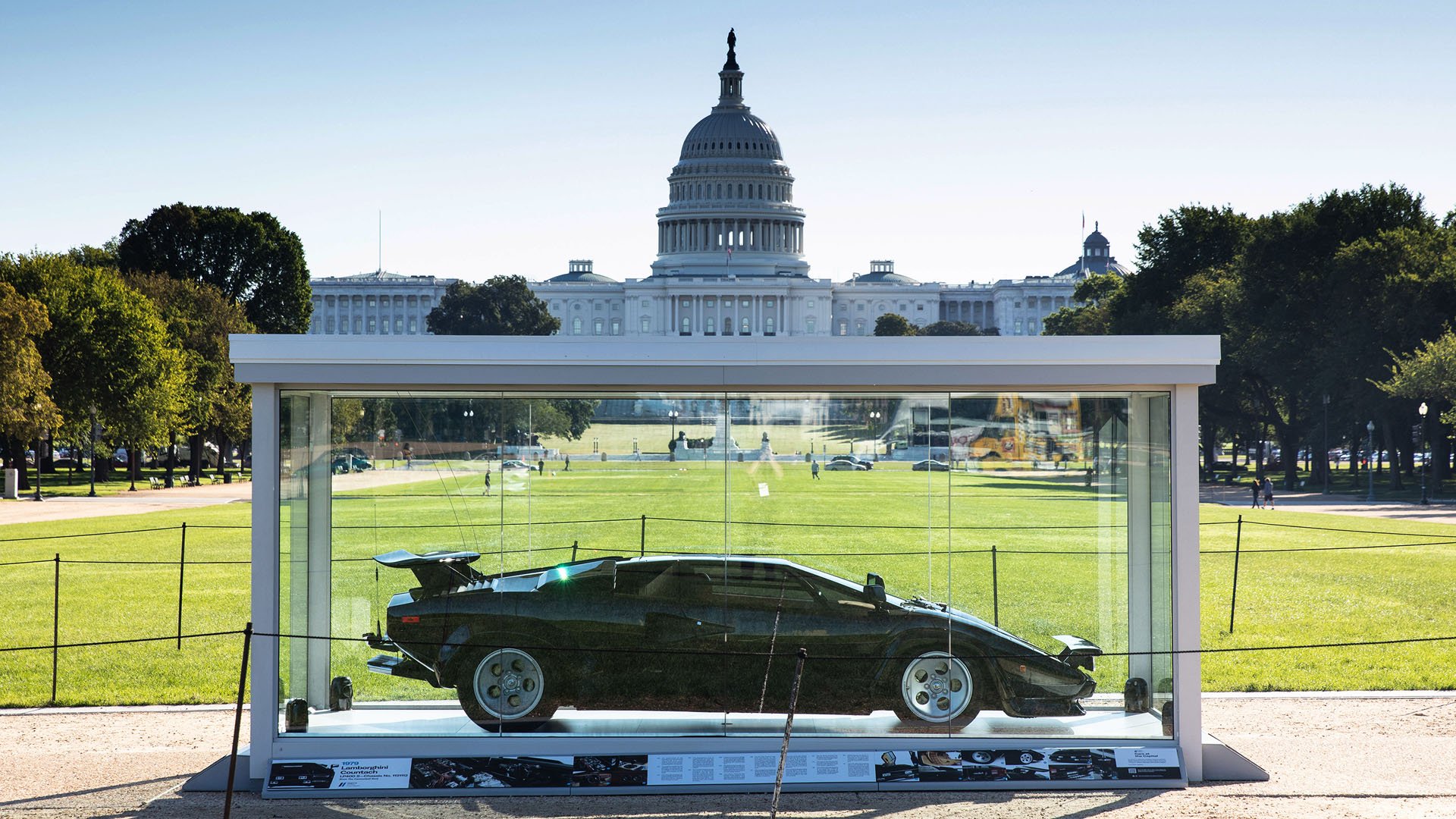 This black Lamborghini Countach S was a 1979 model, so when filming began on the Cannonball Run, this car was virtually still brand new when the owner ‘lend’ her to Hal Needham who was directing this movie, but they decided the factory original Countach wasn’t wild enough for the movie, so they modified her … adding a spoiler to the front with additional lights, probably for more visibility during night-time driving. 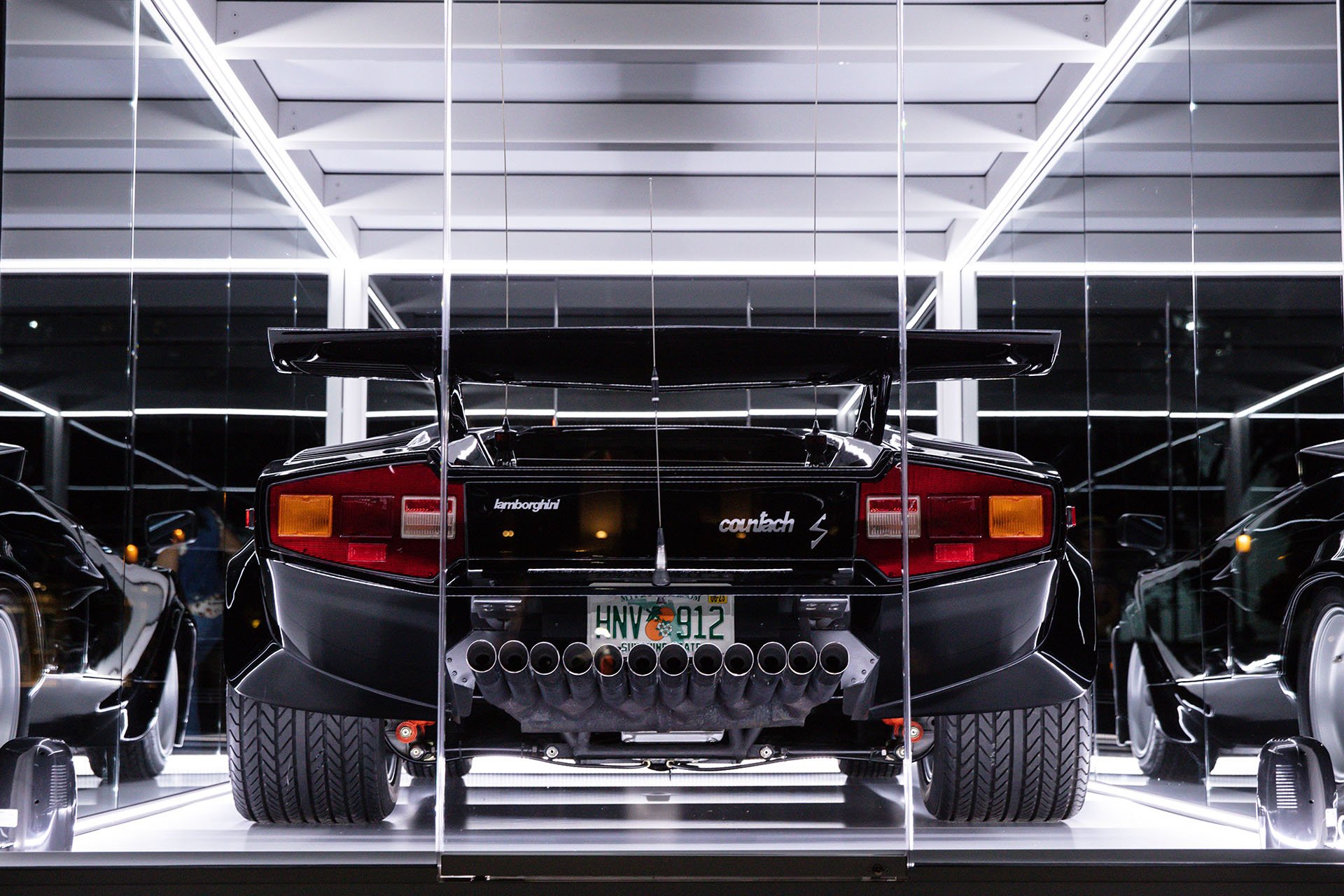 But they didn’t end there, remember this was an illegal race, and while cell phones were first made as early as 1973, they didn’t become popular until the 90s, so racers would use CB radios to communicate with each other, hence the addition of three massively long antennas to the Countach, and to make that famous V12 engine really loud a total of 12 exhaust pipes were fitted for the movie in which actress Adrienne Barbeau would regularly use her ‘assets’ to get out of a ticket. 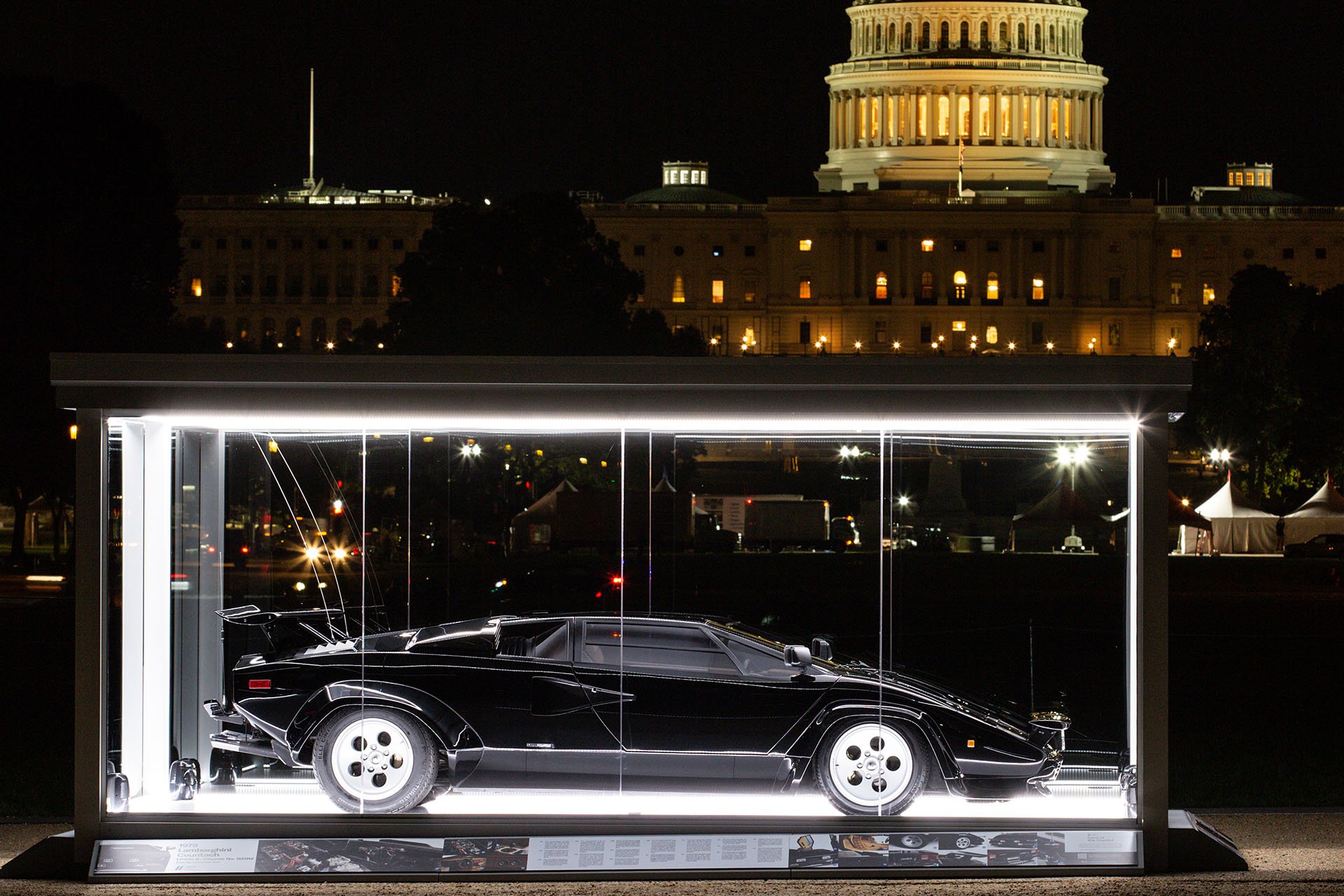 Even while the movie was being recorded, the car changed hands, Ron Rice, the founder of the sunscreen brand Hawaiian Tropic loved this black Countach S so much he bought it from the original owner in a heartbeat and would hold onto this iconic supercar from Sant’Agata for the next 23 years. In comes Jeff Ippolitia, a Florida-based attorney and long-time Lamborghini enthusiast who started the Celebration Exotic Car Festival in Daytona Beach in 2004, who remembered seeing The Cannonball Run several times to admire the Countach.

For his charity event, Jeff wanted to have as many interesting cars as possible, and he found out Ron Rice lived in Florida, it took some networking but Jeff got Mr. Rice on the phone and convinced him to get his black Lamborghini Countach LP400 S out of the garage and onto the show grounds, which is where Jeff learned the car might be for sale … so he got back in touch with Ron Rice and after some lengthy negotiations the famous movie car changed hands, only to be put through a two-year restoration by Tony Ierardi.

Ierardi stated “Obviously we didn’t want it to look like any other Countach. It had to look exactly as it did in the movie, with the 12 exhaust pipes and the CB radio antennae. It was a big deal for me to get to restore it—just unreal. I’ve owned five Countachs and I still get chills every time I see this one.”

As this is a 1979 Lamborghini Countach LP400 S, we are talking about one of the early ‘Low Body’, or Series 1 models, these rare cars sit about 2 inches lower on their chassis compared to later Countach S models, but this isn’t an S model with the periscope roof, and while very few Countach were fitted with that big wing on the front, this will forever be a rare car, a one-of-one famous movie car.

Ms. Diane Parker, Vice President of Hagerty Drivers Foundation states: “We help to shape the future of car culture by celebrating our automotive history. We provide programs and financial support in three focus areas: Car Culture, Education, Innovation. Every September, we celebrate automotive culture with our event where we showcase historically significant automobiles on the National Mall in Washington, D.C. Since 2009, 29 vehicles have been added to the National Historic Vehicle Register, a program created in partnership with the U.S. Department of the Interior and Library of Congress. We are now very proud to announce that our car no. 30 is the 1979 Lamborghini Countach LP 400 that starred in the 1981 movie ‘The Cannonball Run’“ 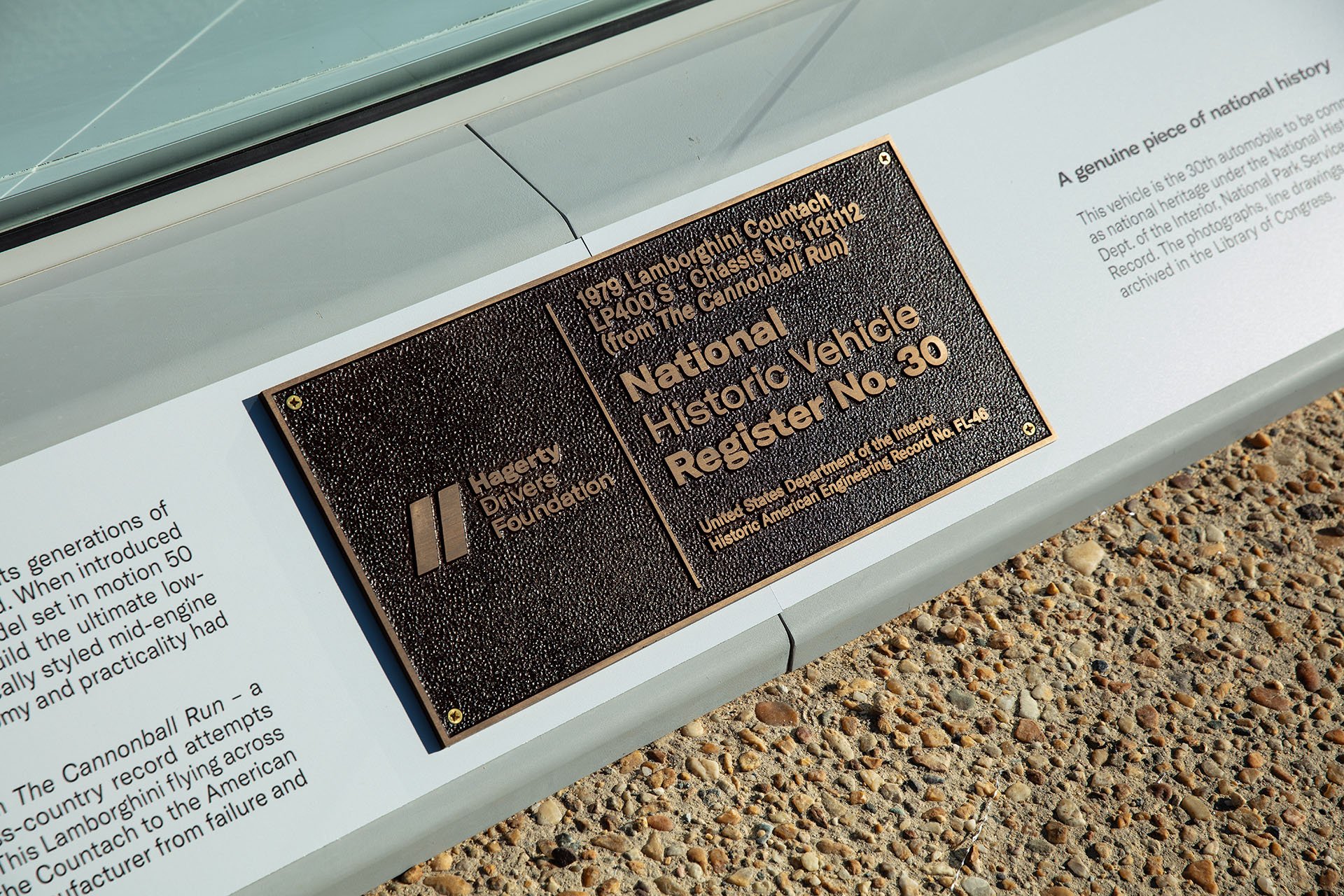 Let’s go back to 1981 and enjoy this compilation of appearances of this black Lamborghini Countach LP400 S in The Cannonball Run, starting with the impressive opening scene: