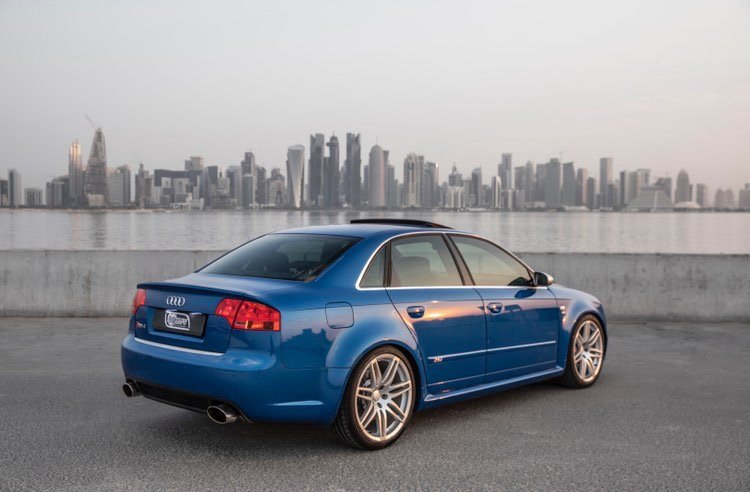 The B7 Audi RS4 is one of the all time great four-ringed cars. Its combination of a screaming V8 with a manual transmission, and sweet handling balance make it one of the most desirable classic Audis (calling a car from the mid-’00s classic is making me feel very old) among enthusiasts. This one, which will be going up for auction at Silverstone Auctions on November 13, is a gorgeous example with only 217 miles on the odometer. Someone is going to pay big bucks.

This specific 2007 B7 Audi RS4 is a right-hand drive sedan, not an Avant (wagon), and it wears a Mugello Blue exterior paint with  black interior. As you’d expect from a car with 217 miles, it’s in perfect conditions, with nary a scratch, nor bump on it. It looks like it just rolled off the showroom floor in 2007.

Under the hood is a 4.2 liter screaming V8, making 420 horsepower and 317 lb-ft of torque. While its power is impressive, helping it get from 0-60 mph in 4.6 seconds — impressive for the time — but its engine’s character is even more special. It revs beautifully past 8,000 rpm, making an incredible noise all the way there. It also makes the most of its torque between 2,500 – 7,600 rpm, giving it a robust powerband. Despite being such a high-revving V8, it’s flat-ish torque curve make it feel surprisingly punchy, even at lower revs.

The engine is paired with a slick-shifting six-speed manual and a 60/40, rear/front-biased Quattro all-wheel drive. It also has Audi’s Dynamic Ride Control, which gives it cross-linked hydraulic suspension, making it handle with surprising neutrality, despite being front  heavy. That same DRC also makes it handle well on choppy roads, making it a do-it-all performance sedan.

We don’t know what sort of price this is going to go for but it’s not going to be cheap. It will also likely set a precedent for pristine B7 RS4s moving forward. So we’re going to keep an eye on it and see what happens.

The post B7 Audi RS4 with 217 Miles Going Up for Auction appeared first on QuattroDaily.