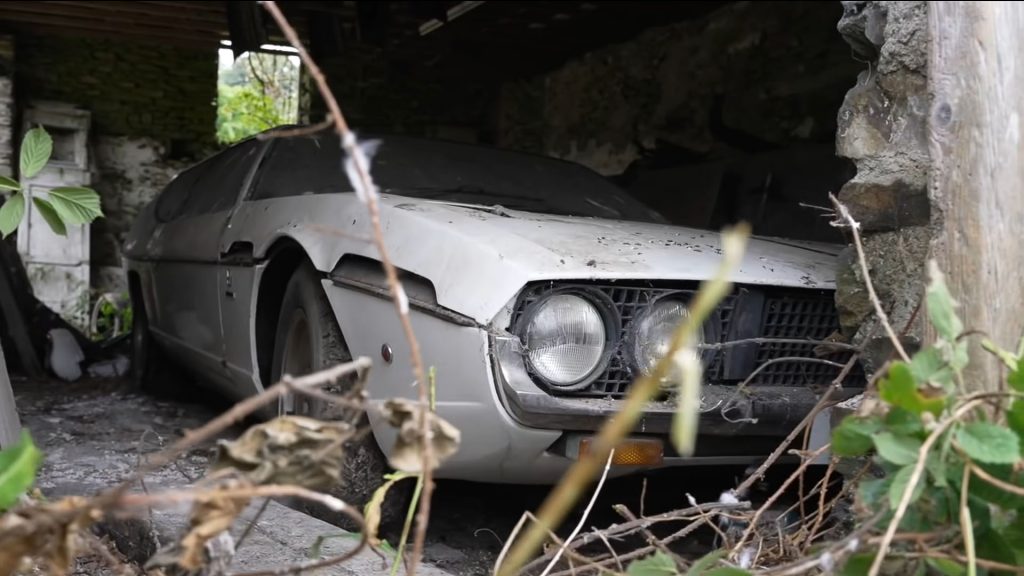 Imagine you own a few buildings around your farm you don’t really need anymore, but they are solid and it would be a pity to demolish them, so you rent out parking space, that way you get a small income and the barns don’t remain unused, that is exactly what an owner in the UK had in mind a few decades ago, so he had some spots for rent.

One day a Lamborghini Espada turns up, the owner of this four-seater Raging Bulls asks to keep his car for storage in one of the barns and pays rent … for a few months until he disappears, never to be heard of again, never returning to pick up his car … the car remained parked up in the Lake District, near Kendal in the UK … for more than 30 years!

This white Lamborghini Espada, chassis 9200, was hiding out of sight for over 3 decades, initially covered up, but later exposed to bird droppings and everything else running, flying or crawling around in this barn, but in her corner, there wasn’t too much light, and especially no UV rays from the sun, so both the paint and the blue leather interior have survived rather well.

The video below clearly shows the registration being ‘5 MBP’, which corresponds with the Lamborghini Registry listing for chassis 9200, a late September 1973 RHD model with engine number 41150 build on Bertone’s body #X750X0900X arrived at Lamborghini London on September 7 1973 only to be delivered to Wingate four days later, making this a Series III Espada.

Being one of only 456 units of the Lamborghini Espada Series III built between 1972 and 1978, rumor has it only 130 Espada were ever built in RHD version like this barn find, in total a little over 1,200 Espada left the factory gates at Sant’Agata, but this model hasn’t been the most sought after over the years, still having that massive V12 engine at the front, maintenance shouldn’t be taken lightheartedly on these high-performance highway cruisers, so over the years many have gone in disrepair never to be resurrected anymore, some sources state only about 350 Lamborghini Espada are still in driving shape.

This specific Bianco over Blu 1973 Lamborghini Espada Series III RHD will go to auction in the near future, but for now enjoy the discovery of a real Lamborghini barn find in the UK in the movie below:

The post Lamborghini Espada found after being in storage for 3 decades appeared first on LamboCARS.