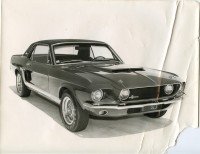 SCOTTSDALE, Ariz. ‒ September 16, 2021 – For the first time in history, a pair of extremely rare and historic 1967 concept vehicles, Craig Jackson’s fabled lost Ford Shelby GT500 Experimental (EXP500) muscle car and the only Shelby GT500 convertible built that year, will be displayed during the Barrett-Jackson Inaugural Houston Auction on September 16-18 at NRG Center. The pair will star inside the official Ford Motor Company exhibit at the event for the entire three days and Jackson will host a personal introduction of the pair at 9:15 a.m. CDT on Friday, September 17.

“These two big-block cars were built as concept and experimental vehicles just months after Ford and Carroll Shelby beat Ferrari at Le Mans,” said Jackson, chairman and CEO of Barrett-Jackson. “They were cornerstones of an ambitious American plan to vanquish the prancing horse across the globe. The personal grudge between Enzo Ferrari, Henry Ford II and Carroll Shelby had spilled over from the track onto the street, where Ferrari sold cars to the public to fund his racing program.”

Ford and Shelby American built the car dubbed “Little Red” as an experimental car to test new technologies. It was the first of two Shelby prototype big-block coupes, the other being the “Green Hornet,” which is also in Mr. Jackson’s collection. Officially “EXP500” to denote its status as an experimental Shelby GT500, Little Red was a pivotal developmental car for a variety of ideas, ranging from a restyled body to dual-quad carburetors, a black Connolly leather interior and twin Paxton superchargers. The car also served as the prototype for the 1968 “California Special”, making it also a double concept vehicle.

The epic search, recovery and restoration of “Little Red” was featured in a documentary sponsored by Barrett-Jackson and Shell Pennzoil. Narrated by Carroll Shelby’s grandson Aaron Shelby, the film – and another about the experimental 1968 Shelby GT500 named the “Green Hornet” – were broadcast on A+E Networks’ FYI and HISTORY channels. The Green Hornet was previously owned by Steve Davis, president of Barrett-Jackson, who researched the car. Both documentaries are available on demand via the Barrett-Jackson YouTube channel.

“The car has deep Texas roots as we found the ‘lost Shelby’ in a field not far from Carroll Shelby’s East Texas home,” said Jackson. “The world was stunned when we unveiled the Shelby inside the Henry Ford Museum in 2018. Now we’re making history again by displaying it alongside the only 1967 Shelby GT500 convertible for the first time ever. It’s even more significant that the car will be exhibited inside the official Ford display, which is a perfect way to celebrate the first Texas auction in Barrett-Jackson’s 50-year history.”

The significance of #0139 extends beyond the Shelby marque. Prior to wearing a Shelby American serial number, the convertible rolled off Ford’s San Jose Mustang assembly line. All 1967 Mustangs ordered by Shelby American as GT500s were equipped with the potent “Ford Cobra” 428ci engine topped with dual 4-barrel carburetors. Thus #0139 is the only multi-carbureted Shelby Mustang convertible ever built. It was also reworked to be the prototype for the 1968 model year Shelby GT500 convertible line.

All of these facts have been researched and documented by Brian Styles, founder of the Shelby Research Group, and the caretaker of the 1967 Shelby GT500 convertible. A respected historian and expert on classic Shelby cars, Styles recommended the shop that restored his car when Jackson decided that the Green Hornet needed some care.

The two experimental Shelby GT500s (Green Hornet and Little Red), along with the ’67 Shelby GT500 convertible were restored by Jason Billups, founder of Billups Classic Cars and Auto Body. Billups helped Jackson locate Little Red in 2018 while working on the Green Hornet. Under Jackson’s direction, Billups assisted in the search for the “holy grail” of lost cars and then brought it back to life after extensive research.

The presentation at 9:15 a.m. on Friday, September 17, is open to media and guests in attendance. Media interested in attending the Inaugural Houston Auction may apply for credentials at Barrett-Jackson.com.

Bidder registration for the Inaugural Houston Auction is open and may be accessed online or at the event. Absentee bidding options are available online, by phone and proxy. Those interested in becoming a bidder may submit their application by visiting Barrett-Jackson.com/Bidder.