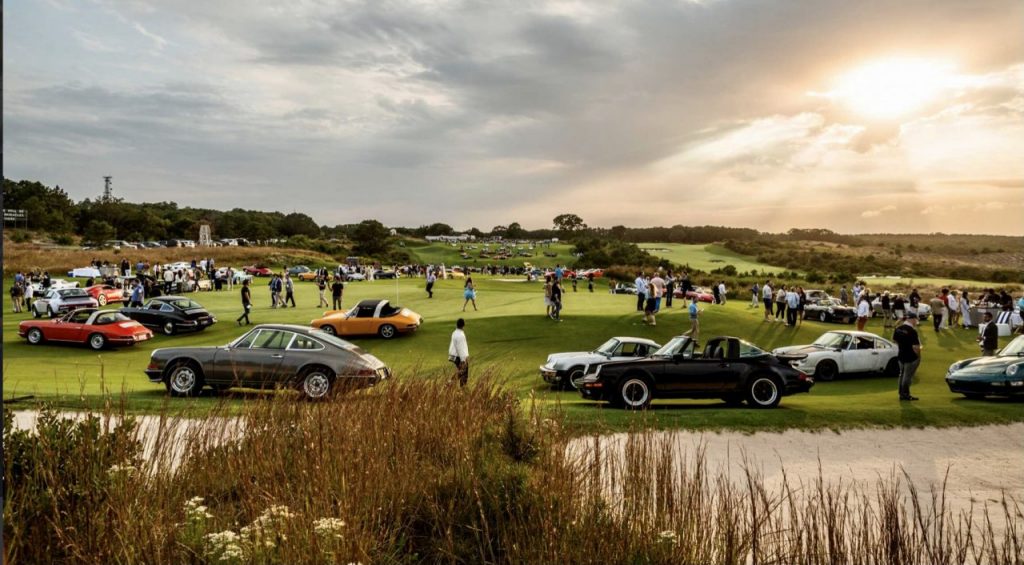 One of the most fabled of American sports car racing circuits was Bridgehampton, on New York’s Long Island, where cars raced on public roads from 1949 until 1953 and then from 1957 to 1999 on a purpose-built race track used by Can-Am, Trans-Am and even NASCAR events.

Part of the circuit was developed into the Bridgehampton Golf Club, where, since 2016, Robert Rubin, Shamin Abas and Jeffrey Einhorn have staged The Bridge, a major car show that benefits the Harlem-based Bridge Golf Foundation.

The 2021 dates for the show, which annually draws some 200 vehicles, are September 18-19. The Sunday event is closed to members but there is a cars and coffee car-show gathering open to the public on the 18th.

British restoration specialist Classic Motor Cars used the Royal Concours to unveil the result of the 18-month restoration of the Aston Martin Bulldog. The car was a one-off project from 1980 designed to exceed 200 mph — and thus set a production-car speed record.

Richard Gauntlett noted that the car disappeared after being bought from Aston Martin by someone in the Middle East. At one point, the car was in the United States and at some point was purchased by Phillip Sarofim.

Although the car looked to be in good shape, it had been damaged by a forklift and had not run for many years. A team of 11 did the restoration, among them two apprentices from the Royal Naval Air Station at Yeovilton in the UK. The car will be tested at the air station in preparation for a run to see if it will, indeed, exceed 200 mph.

“We have tried to be as faithful as possible to the original design and concept by not only returning the car to its paint and trim scheme, but also engineering the car in such a way that major mechanical components are now located as the designers originally intended,” said Nigel Woodward, head of Classic Motor Cars.

He added that including “state-of-the-art engine-management systems and modern components such as liquid-cooled turbochargers which will ensure that Bulldog is preserved for future generations.”

Best of Show honors at the 2021 Salon Privé Concours d’Elégance at England’s Blenheim Palace went to a 1938 Mercedes-Benz 540 K Cabriolet A. The car, chassis number 154076, was first owned by the head of a Berlin-based advertising agency. The car is built on a longer wheelbase with its engine and gearbox set back in the chassis.

The Audrain Newport Concours & Motor Week, scheduled for September 30 to October 3, will feature a Luxury Class of vehicles that reflect the Gilded Age of Newport, Rhode Island.

“The Luxury Class is indeed the personification of beauty and comfort, all within the realm of truly extravagant living,” the concours said in its announcement. “The vehicles on show are an extraordinary selection of iconic cars that run from the early 1920s to the mid-1970s.”

Another seminar is “Shaping the Future Of Driving,” with Tesla designer Franz von Holzhausen and Jay Leno, in a conversation about Tesla’s design philosophy. Also on the program of 10 seminars are “Porsche: People Making the Passion,” examining the brand’s successes, and “Classic Car Commercials — Auto Ads that Dazzle,” a look at the way automobile manufacturers have found success selling a dream of vehicle ownership.

The Chattanooga Motorcar Festival gets a new racetrack layout for its second celebration scheduled for October 15-17 and ambassador Brian Redman, event founder Byron DeFoor and grand marshal Corky Coker recently did a few laps of what is being called the Pace Grand Prix at the Bend circuit, albeit without safety barriers in place.

As representatives of the Historic Motor Sports Association were on hand finishing their operating plan for sanctioning the vintage races, Redman rode around the circuit with Coker in his 1911 Mercer Raceabout. DeFoor did the 8-turn track in his 1972 BMW CSL.

“I drove round the race track with Corky in his magnificent 1911 Mercer Raceabout, capable of 100 mph – but we certainly didn’t go that fast,” Redman was quoted. “The course winds through an industrial park, tree-lined on one side and down a city street protected by safety barriers. There are fast areas and tighter turns to provide ample overtaking opportunities.

“There will be both hard braking and sweeping turns. Top speed will be around 150 mph in the right car. Second, third and fourth gears (top) will be used but it depends on the cars.”

“The track is nothing like a modern-day track, but suits historic road racing like it originally was – between buildings, industrial plants and parks,” DeFoor noted. “I loved the scenery of the river and mountains on the back straightaway.

“Some streets are freshly paved while some have been around since the turn of the century.”

Italian cars and motorcycles, and some Swedish and American vehicles with Italian DNA, will be featured November 6 at the Car Club Showcase that will be part of the Hilton Head Island Concours d’Elegance & Motoring Festival. The club showcase takes place the day before the concours and features vehicles from South Carolina area car clubs.

Velocity Invitational next for Hetfield cars

Metallica frontman James Hetfield’s collection of custom cars has been exhibited recently at the Petersen Automotive Museum and The Quail, and from November 11-14 is scheduled to be showcased at the Velocity Invitational at WeatherTech Raceway Laguna Seca in Sonoma, California.