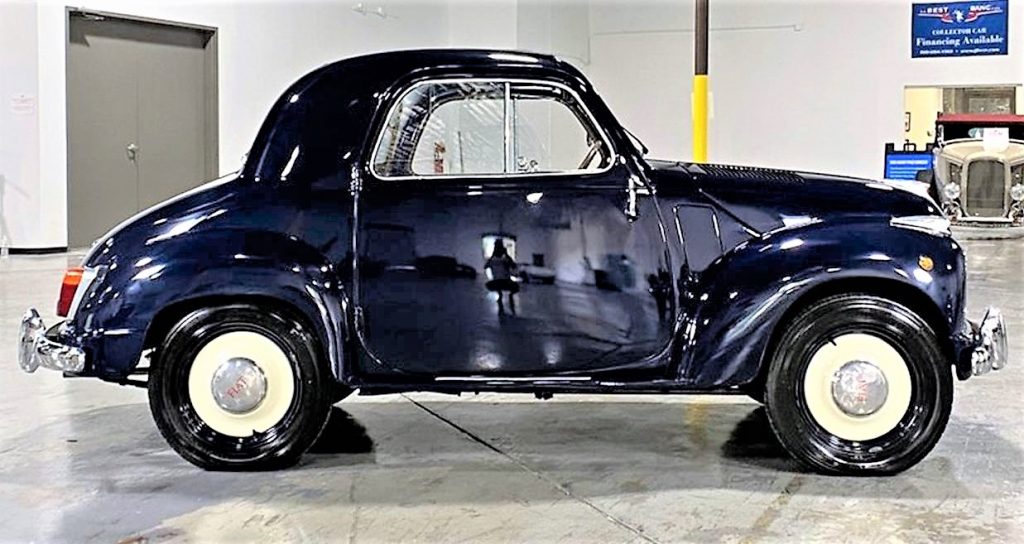 I dig micro-cars, although pretty much vicariously since at 6-and-a-half feet tall, I just don’t fit in them.  Such is the case of the Pick of the Day, a 1953 Fiat 500C Topolino Trasformabile that looks like it would be so much fun to drive, just not by me or anyone my size.

Tiny by any standard, this 2-seater Fiat would enjoy a starring role at the Little Car Show, held annually in Pacific Grove, California, during Monterey Car Week.  The Italians certainly appreciated its diminutive stature, the word Topolino translating to English as “little mouse.”  The word also is used by the Italians to refer to Mickey Mouse.

“Launched in 1936, the new baby Fiat was the smallest mass-produced car of its time designed to bring motoring to the masses,” according to the Marietta, Georgia, dealer advertising the car on ClassicCars.com. “The final iteration of the Topolino, the 500C, ran from 1949 to 1955.”

The Topolino is described by the seller as entirely roadworthy, although the Fiat is obviously meant for urban or country-lane driving, and is not really equipped for cross-country trips. Power is provided by a 569cc inline-4 with an output of 16 horsepower, and top speed of just over 50 mph.

But the Fiat’s considerable charisma eclipses its performance limitations.  And the top goes down – Trasformabile is Italian for convertible, referring to the fabric roof that pulls back all the way for open-air motoring.

“This fine example was recently imported from Italy out of a long-term single-family ownership.”

The asking price for this Fiat is $25,500, which should bring you lots of love, Italian style.

“Just imagine motoring the backroads with the top down in this extremely rare cabriolet, as if touring the countryside vineyards in its homeland of Tuscany, Italy,” the seller adds. “Felice automobilismo (happy motoring)!”