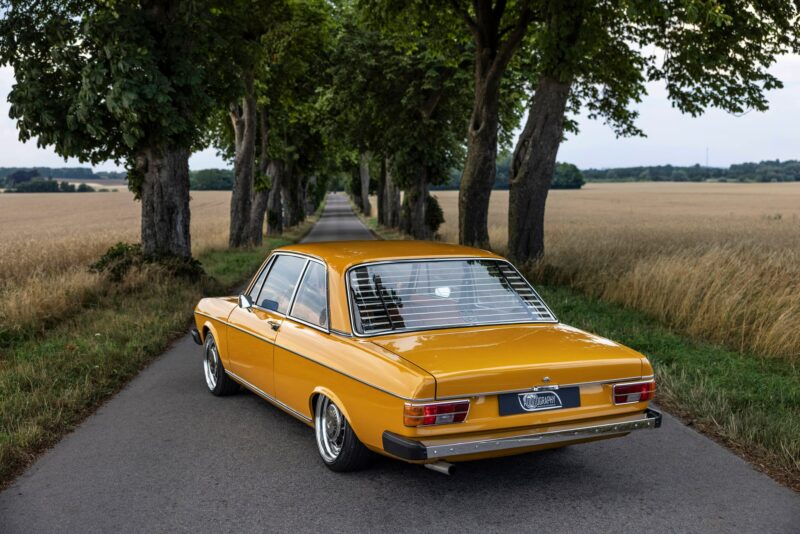 One of my favorite classic Audis of all time is the Audi 100 from the ’70s. There’s nothing particularly special about the old 100; it’s based on an old VW front-drive chassis, features a range a four-cylinder engines, and didn’t really stand out in any one way or another. I just always liked the way it looked and its interior. It always had a European Cold War-vibe that I sort of liked. This one, though, seen in this new video from Auditography, is pretty great.

It’s painted in a lovely Tibet Orange and sits on custom-made three-piece wheels that look like Audi wheels from the era. It also rides on Accuair E-Lever adjustable air suspension, which can give it a slammed look and it’s hilarious. For the most part, though, it looks relatively stock. Only the wheels and suspension give away the fact that it’s been modded and the latter only does so when it’s lowered. Other than that, it looks mostly original and it’s in fantastic condition.

On the inside, it’s again mostly standard, with its brown/tartan design that looks perfectly ’70s. I also love the period-correct wood trim and gorgeous gauges. It’s great. The one addition that really spices it up, though, is the Nardi steering wheel.

Under the hood lies a 1.8 liter naturally-aspirated four-cylinder engine, which was upgraded with new Weber carbs, a new intake, and new exhaust. It still barely makes 100 horsepower but it’s surprisingly loud. Though, that doesn’t mean it sounds particularly good. In fact, it sounds more like a bunch of angry bees inside a tin can. But it’s kinda fun because of it.

The ’70s Audi 100 was and still is a cool car. It’s also a very different kind of Audi from what we’re currently used to. The 100 came during a time before Quattro was the brand’s main ethos, when Audi was just quirky VW offshoot alternative to Mercedes-Benz and BMW. So it’s cool to see some enthusiasts appreciating the old Audi 100 and giving it some fun mods.

The post VIDEO: Check Out This Audi 100 C1 Two-Door from Auditography appeared first on QuattroDaily.