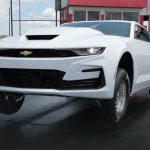 Chevrolet’s COPO Camaro returns for drag strip use only as a 2022 model, and with the newly available 572cid Big Block V8, which Chevy says “channels the spirit of the original 1969 COPO Camaro, a purpose-built drag racer created by dealers using the Central Office Production Order system to equip cars with Chevrolet’s largest V8.”

The COPO 572 has a cast-iron block with four-bolt main caps, aluminum heads, a forged steel crankshaft, forged steel connecting rods and forged aluminum pistons. Pricing for the COPO Camaro with the 572 starts from $105,500.

The 2022 COPO Camaro also will be available with LSX-based small-block engines, Chevrolet points out, either a supercharged 350cid rated by the National Hot Rod Association at 580 horsepower or a naturally aspirated 427cid version rated at 470 horsepower.

All 2022 COPO Camaros will get an ATI Racing Products TH400 three-speed automatic transmission.

“Engineered for drag racers, the COPO Camaro is sold as a Chevrolet Performance part and cannot be registered for street use,” the company emphasizes. “It competes in NHRA Stock and Super Stock eliminators and comes standard with a carbon fiber hood and wheelie bars. Buyers can customize their cars with options such as a trunk-mounted weight box and parachute.”

Chevrolet restarted its COPO — Central Office Purchase Order — program in 2012 and since then has built fewer than 700 such vehicles, only 69 per model year. For 2022, however, the company is not limiting production, but notes that orders will be filled on a first-come basis.

“Buyers may also participate in a private tour of the COPO Build Facility in Oxford, Michigan, where each car is custom made,” Chevy added.

The Jeep brand has announced that the Gecko shade of green paint previously available only on the Jeep Wrangler is now being offered to buyers of Gladiator pickups as a $245 option. Jeep also is making factory installation of Corning’s Gorilla Glass a $95 upgrade for 2021 Wrangler and 2021 Gladiator customers.

“Bold colors like Gecko Green give our customers the chance to stand out on the trails, while the tough Gorilla Glass windshield will help them bring their Jeep home unscathed,” Jeep brand vice president Jim Morrison is quoted in the announcement.

Prodrive built its reputation in rallying, winning right out of the box in the 1984 Qatar International Rally with a Porsche 911 SC RS and then even more famously with a series of Subarus that dominated the World Rally Championship. The company added sports car racing on paved tracks to its motorsports program in 2001 but a few years later returned to rallying.

The Bahrain Raid Xtreme team has announced it will enter a Prodrive Hunter in the Dakar Rally in January 2022 in the new T1+ category. The new vehicle features 37-inch tires (5 inches larger than previous) on 17-inch wheels. The Hunter also has increased suspension travel and a wider stance.

Another change is a programmable windshield wiper motor to improve driver visibility.

BMW notes that the B version “does without a top cae ?? and offers a low windshield, a slimmer seat and a matte black metallic engine finish.”

The bikes are powered by a 110cid 2-cylinder engine with more than 111 pound-feet of torque.

It’s been a long time since Isuzu was selling new cars and pickup trucks in the US automotive marketplace, so you aren’t likely to see the company’s new advertising campaign that ties in with the new Disney movie Jungle Cruise.

But the advertisements will be playing in the UK in August.

“Just like the All-New Isuzu D-Max, the film carries the thrill of adventure and also aligns with the brand’s smarter, stronger and safer values throughout,” Isuzu said in its announcement.

“Isuzu are hoping this collaboration will further their appeal to the lifestyle market as this will allow Isuzu to showcase co-branded assets featuring movie imagery across their outdoor campaign which will feature at motorway services throughout August. Following the successful launch of the All-New Isuzu D-Max this year, Isuzu are keen to become a prevalent name in the pickup world as competitors leave the European market.”

“These Special Edition models feature desert sand exterior panels, military-inspired graphics, and feature several model upgrades. The units will be available for a limited time, and can be preordered now by connecting with your local John Deere dealer,” the company reported.

The vehicles can be equipped with cabs that include heating, ventilation and air conditioning.

In addition to launching the new XUV, the company said it is supporting The SAVE Farm program which provides farming, ranching, and agribusiness training and healing programs for service members, veterans and their families.