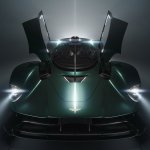 In celebration of Aston Martin’s 70th anniversary selling its cars in the US and the 50th anniversary of its role in James Bond movies, the British sports car producer plans what it calls its largest-ever presence at Monterey Car Week this month.

Located on the 18th fairway of the Pebble Beach Links golf course will be the Aston Martin Club 1913, where the activities will include the introduction of a new vehicle and the North American debut of another, the Valhalla, the company said.

Also featured will be a display by the Aston Martin Cognizant Formula one racing team celebrating the company’s return to the F1 series.

“Positioned at a custom-built 11,300 square foot luxury Club House in a prime location overlooking the hallowed 18th fairway of the Pebble Beach Golf Links above Stillwater Cove, Aston Martin’s 2021 space honors both the past and present, while simultaneously looking forward with the introduction of two new products that point to the brand’s performance car future,” the company said in its announcement.

Aston Martin added that nearly a quarter of all its vehicles built to date were sold in the North American automotive marketplace.

“Shortly after entering production in 1950 with its then-new DB2 saloon, Aston Martin elected to expand its foothold and begin sales in the Americas as a way capitalizing on the region’s new-found taste for European sports cars in the immediate post-war years,” the company noted.

“As part of a fledgling public relations push to raise awareness for the brand in the states, a 1951 DB2/4 was shipped to the U.S. for testing with key automotive enthusiast publications. Road & Track magazine was among the first publications to get its hands on the car and wasted no time in properly evaluating it with none other than soon-to-be world champion Grand Prix driver Phil Hill at the wheel.

“Testing and evaluation by U.S. publications was a success; Road & Track proclaimed it to be “…one of the best handling and fastest cars ever tested….”

In fact, after concluding the evaluation, Hill walked away from the test so impressed he decided to purchase the test vehicle itself, becoming one of the first buyers of the DB2 in North America, taking delivery on 15 September 1951.

“The success of the DB2 in North America cannot be overstated,” Aston Martin added. “Of the 411 cars built, around a third made their way direct from the Aston Martin factory to owners in the United States. 70 years on from its humble beginnings in 1951 there have been ebbs and flows for the business.”