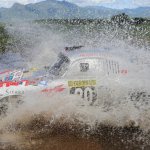 Renee Brinkerhoff, her 1956 Porsche 356 and the Valkyrie racing team are preparing for their next bold challenge: Completing the Project 356 World Rally Tour of all seven continents with an unprecedented 356-mile drive across the rugged frozen wastes of Antarctica.

Having already raced and rallied with her vintage Porsche in some of the world’s most grueling competitions, including the high-speed La Carrera Panamericana of Mexico, the muddy East African Safari Classic Rally, and the 9,300-mile Peking to Paris Motor Challenge across Asia and Europe, driver Brinkerhoff and her Valkyrie teammates are ready to embark on the final piece of their 20,000-mile journey.

After repeated postponements, including those caused by the pandemic, the icy adventure in the modified Porsche 356 A coupe is set to begin in December, according to the team’s news release.

“Scheduled to depart from Union Glacier in Antarctica in early December, Brinkerhoff will be making the expedition with legendary adventurer Jason de Carteret as her navigator, while she stays behind the wheel and asserts the final voyage,” says the release, which notes that de Carteret is a British explorer who holds a world record for polar exploration and has been to both the North and South Poles many times.

What’s unique about the World Rally Tour is that Brinkerhoff is a 65-year-old Colorado woman whose first competitive racing event – in her 1956 Porsche 356 – was the La Carrera in 2013, when she won her class despite being a rank novice.  After that, she set the goal of racing/rallying in major events on six of the world’s continents, and finishing up with the long victory lap on the seventh, Antarctica.

She is also something of an anomaly in the world of competitive rallying, where the overwhelming cadre of drivers are men and much of the racing is done with modern vehicles.

While engaged in her remarkable pursuit in the beloved Porsche, Brinkerhoff also is working on a personal quest, to help raise world awareness and end the scourge of human trafficking through the Valkyrie Gives Foundation.

During the past 18 months, Brinkerhoff and her team have focused on “re-engineering the 1956 Porsche 356A into a lighter-weight, carbon-positive, modified version of itself, to handle the demands of driving 356 miles on ice in Antarctica,” the release says.

“The Antarctica endeavor holds two goals for the team: to drive 356 miles on the harshest, coldest terrain in the world, and to achieve a new land speed record on the ice of Antarctica,” the release notes.

“Regarded as the ‘ultimate challenge’ and marking the finale of Valkyrie Racing’s Project 356 World Rally Tour, the incredible effort this winter will note a global record of a near 20,000-mile trek on all seven continents – a feat no woman or vintage car has yet to do.”

Brinkerhoff will be a panelist in a Pebble Beach Classic Car Forum entitled “Women Who Love Their Cars” that will be held August 13 at 4:30 p.m. at the Concours Village at Pebble Beach, California. For information and registration, visit the Pebble Beach Forum website.