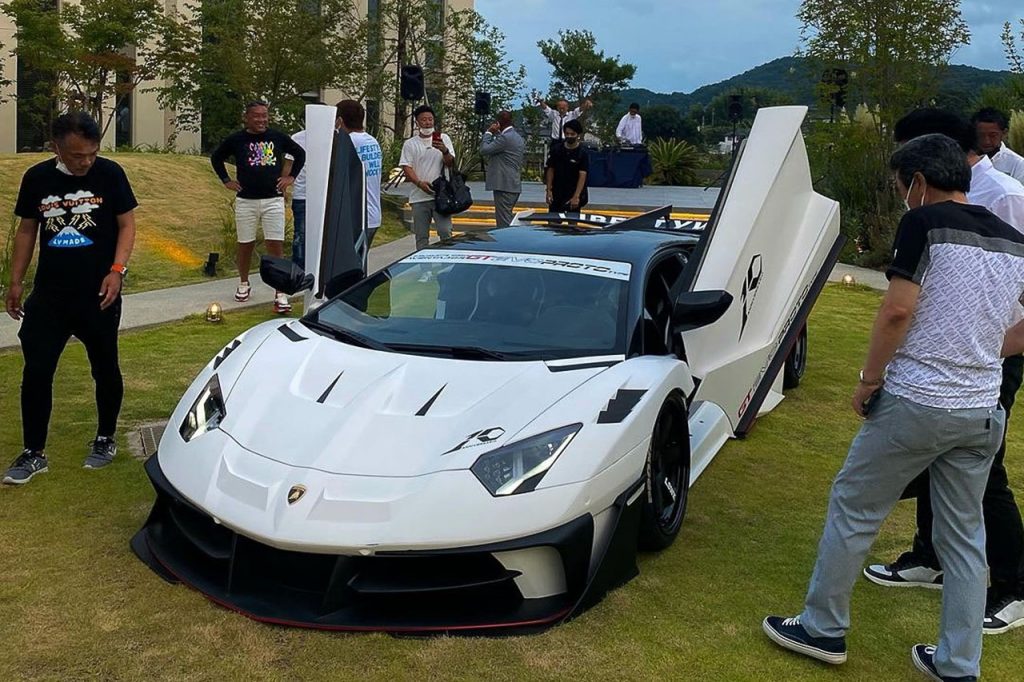 LB Works or Liberty Walk, a Japanese company founded by Kato-san has been creating some of the wildest wide-body supercars in the world, always extremely lowered with air ride suspension, and featuring extremely wide fenders and massive rear wings, that’s the LB-works style, but to celebrate his anniversary, on January 19, 2021, Wataru Kato, the founder, and CEO of Liberty Walk, turned 54 … as a present to himself, he unveiled the ultimate edition of the LB Aventador. Only 20 of these kits will be made, and it’s called the LB Silhouette WORKS Aventador GT EVO, in line with his latest Huracan kit that’s called the LB-Silhouette WORKS Huracan GT.

The LB Silhouette WORKS Aventador GT EVO is Kato-san’s most extreme aero package ever for the V12 flagship from Sant’Agata, based on the Lamborghini Aventador, the LB Silhouette WORKS completely transforms the supercar into a track inspired weapon, ultra-wide, ultra-low, and with a massive rear wing, complete with a vertical fin for stability at speed. 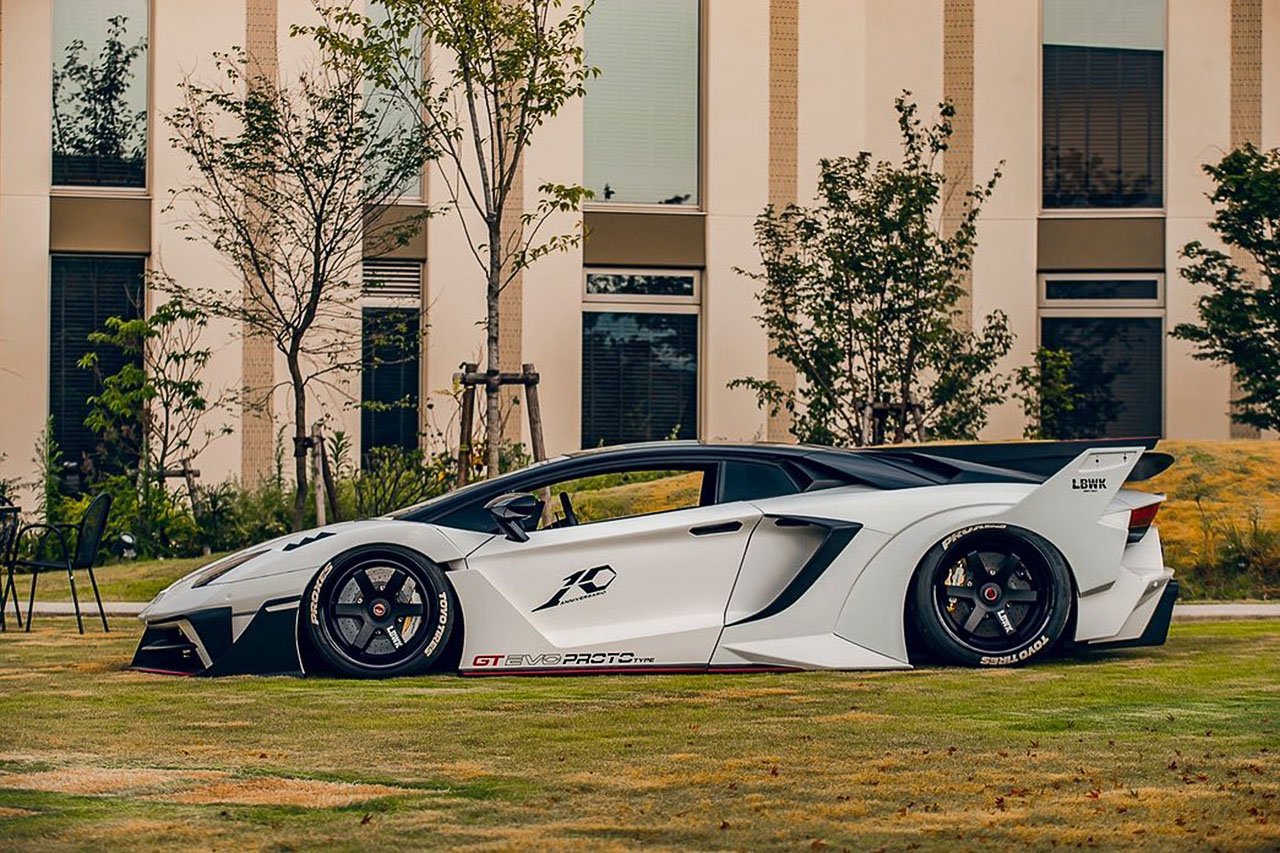 The construction of this amazing new LB Silhouette Works Aventador has been going on for while already, this isn’t a quick bolt-on kit for sure, installing this $187,000 (for the carbon fiber version of the kit) onto your existing Lamborghini Aventador isn’t for the faint of heart, this is an intrusive kit for those that want to have something different without turning to the likes of Mansory with a price tag into the seven-figures, if you can buy an older Aventador you’ll be set for about $500,000 all said and done. 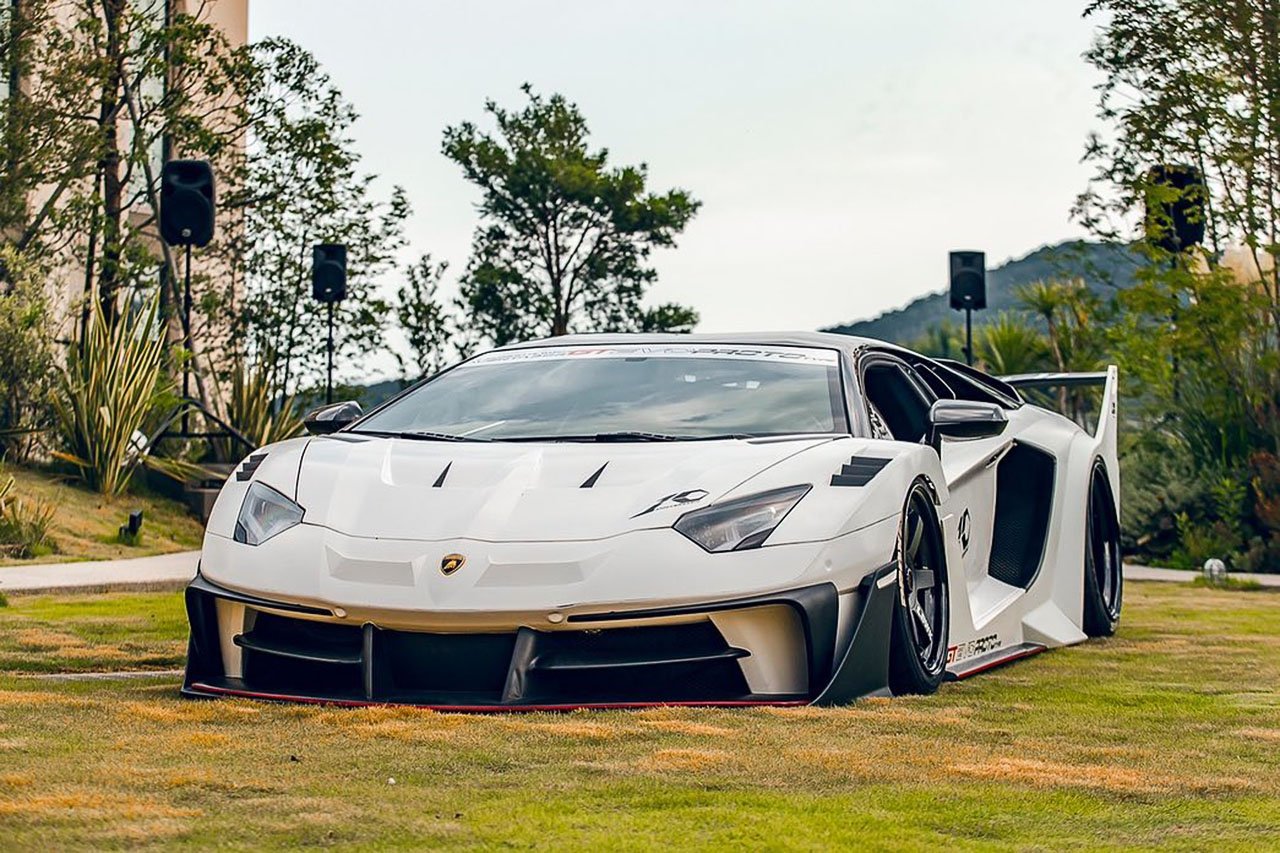 If we look closely at the white ‘GT EVO PROTOtype’ that was just completed this week, we notice not much of the original Aventador is still recognizable, the headlights and taillights seem to remain, as does the entire roof and cabin, probably for rigidity and to keep the car street-legal, but that’s about it … everything else seems to be either replaced or modified on this latest creation by LB Works. 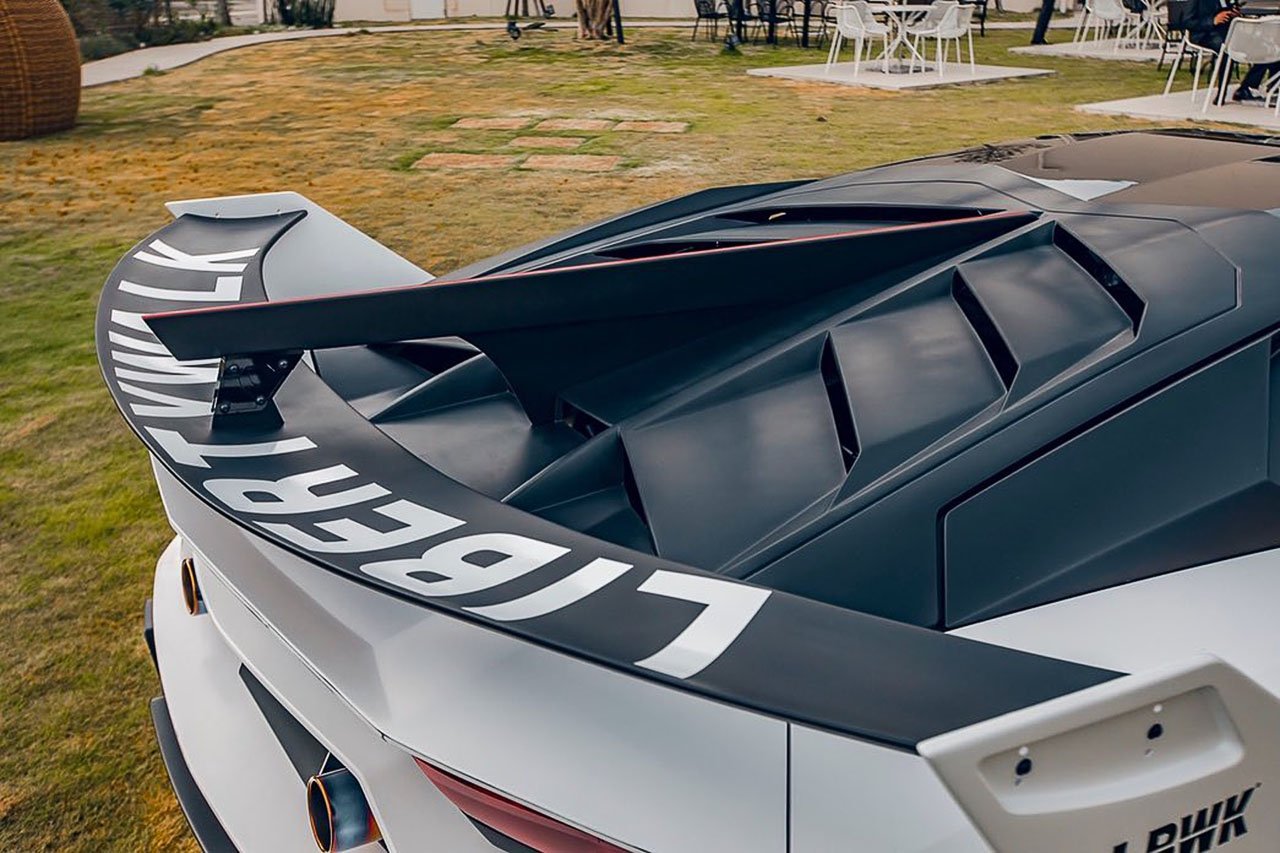 Judging from the interior in a combination of black and white, it seems this PROTOtype is based upon an Aventador S model, but it doesn’t really matter too much as this kit can probably be fitted no any Aventador model, as long as it’s a coupe because the GT EVO kit comes with a replacement engine cover that holds a vertical fin that attaches to the rear wing, that won’t fit on the Aventador Roadster like this due to the latter having a different design for the section behind the seats. 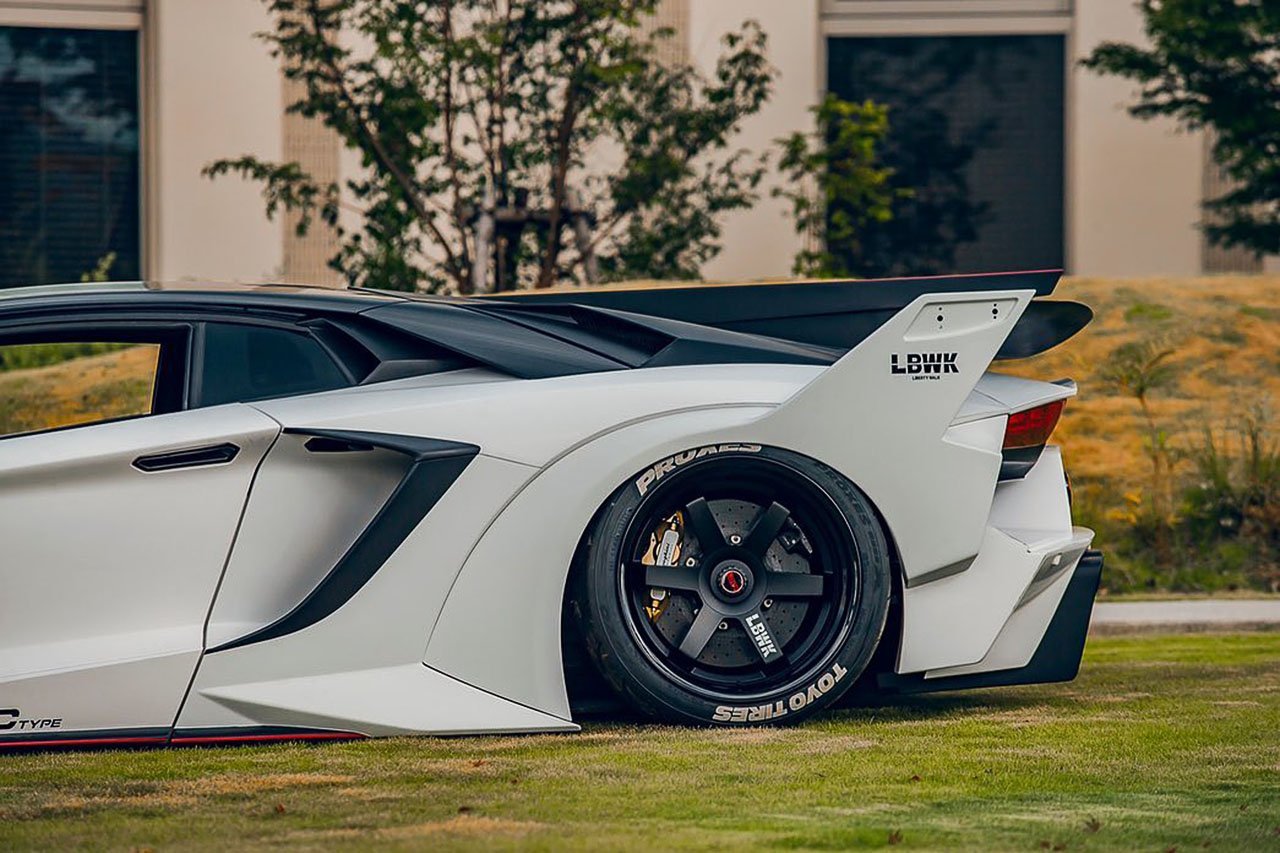 Looking at the uprights that hold the massive rear wing, it seems you can fit the aerofoil at three different angles, to either increase or decrease downforce I guess, I can’t help but get the impression Kato-san got inspired by the one-off Lamborghini SC18 with some Veneno influences, but this GT EVO would look out of place at LeMans with this kind of styling. 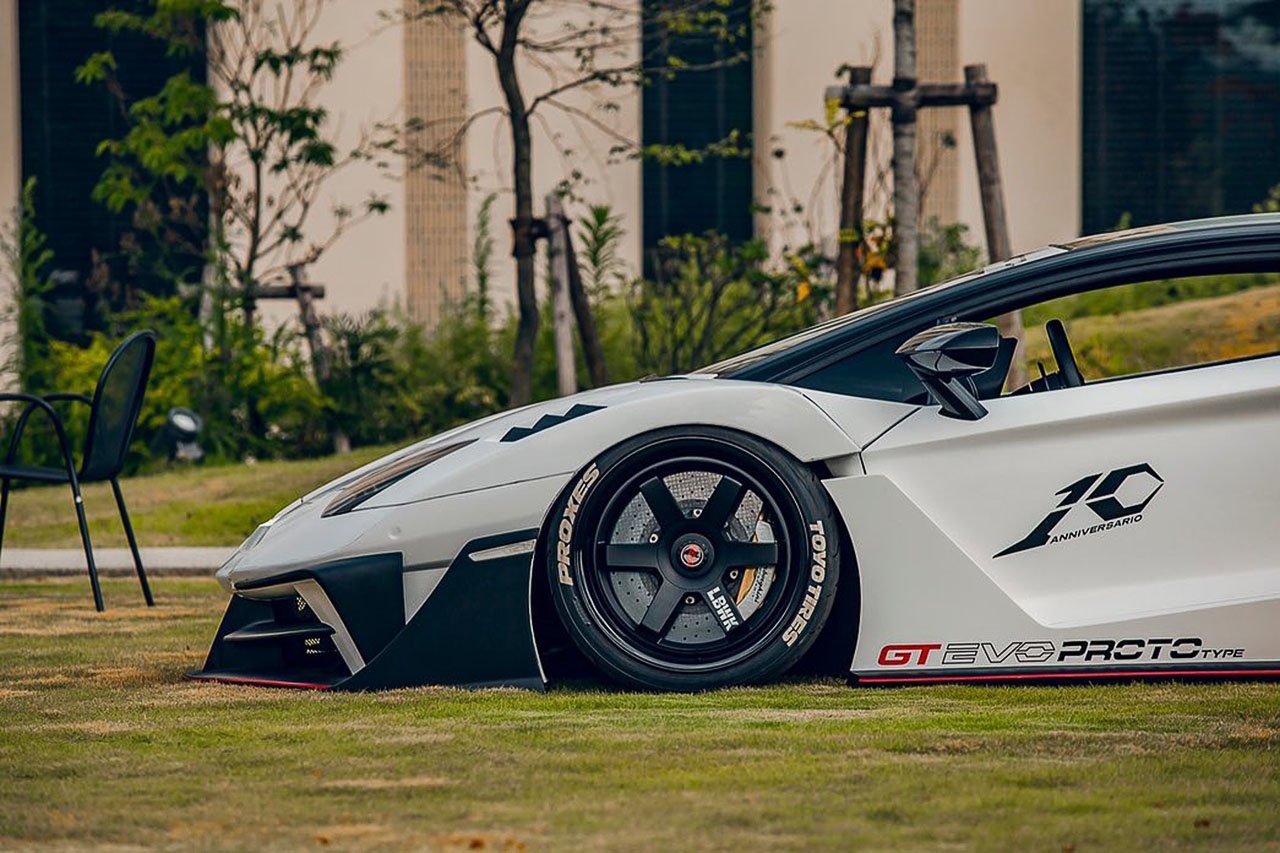 Everything below the ‘waistline’ on the Lamborghini Aventador has been replaced to create the GT EVO version by LB Works, the rear fenders are completely changed into these ultra-wide, angular styled units with integrated rear wing struts and larger air intakes behind the doors, speaking of the doors, they are modified with fixed aero sections just behind the front wheels and wide, integrated side sills, they still clear the front fenders when opening, I’m sure that took some serious trial and error to get just right due to the extra width. 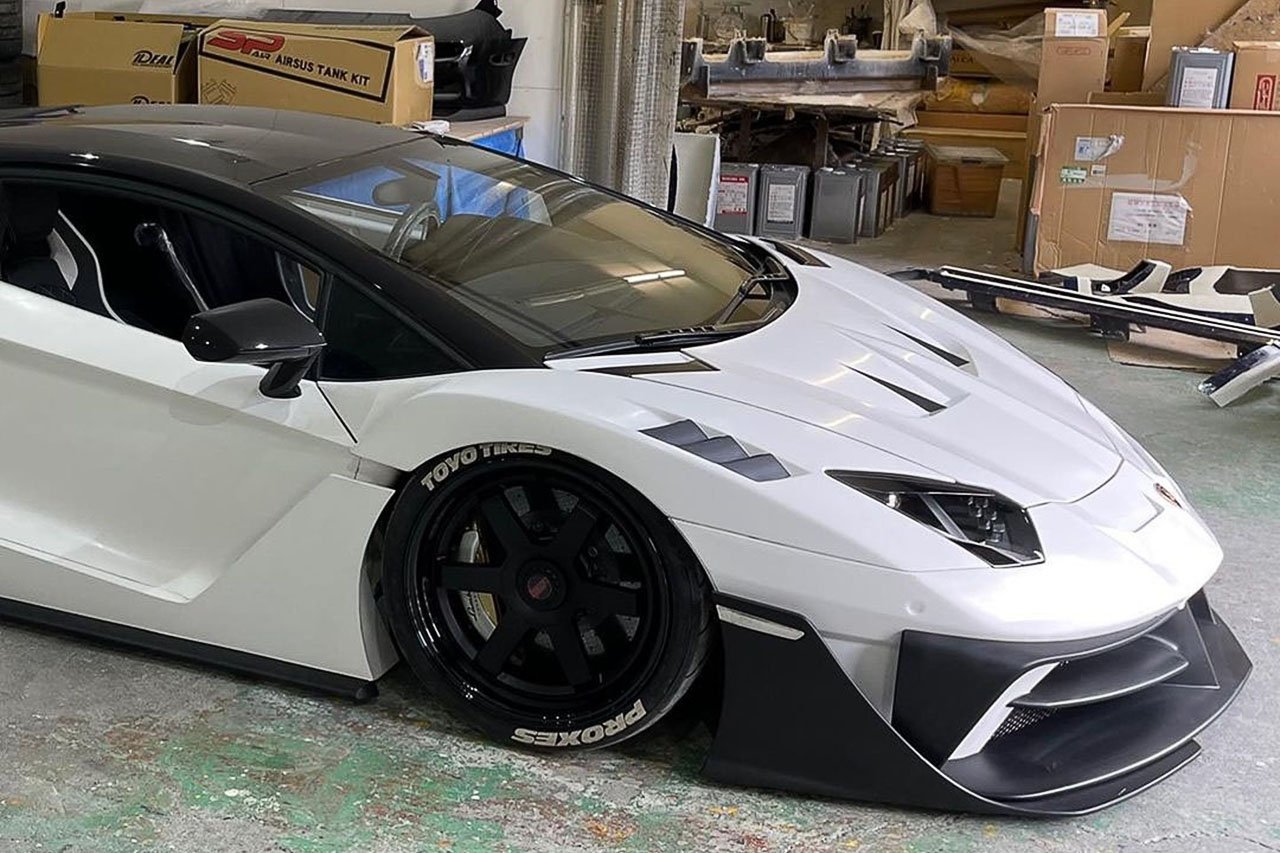 The front fenders are replaced with much wider units, complete with integrated air vents on the top and aerodynamic appendages that run into the fixed vertical fins on the doors, a massive Veneno-styled front bumper with large air intakes and even more vertical stabilization fins complete the look at the front. Do note the Aventador SVJ style air vents on the top of the bumper, and it wouldn’t be an LB Works kit without a new front hood with integrated vents … that’s just a must-have on this GT EVO. 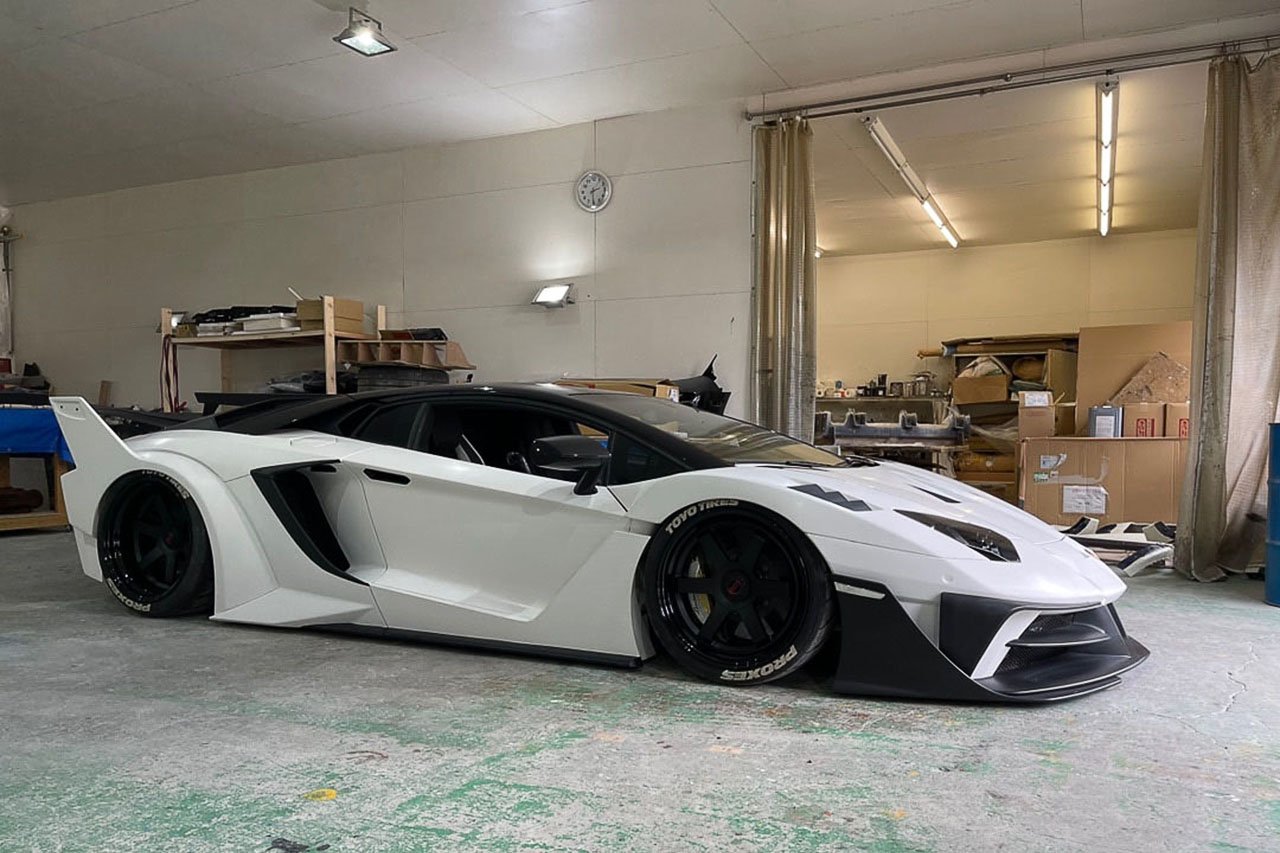 This white and black LB Silhouette WORKS Aventador GT EVO boasts some PROTOtype decals on the side, together with stylish 10th Anniversary stickers, so this might possibly not be counted as one of the 20 production kits LB Works will offer to customers around the world, and there is no official information yet on how many kits have been sold by now, but I guess all 20 will sell out quickly … and just imagine if someone would install this onto an Aventador Roadster anyway, without the vertical fin and engine cover, but it would still look amazing nonetheless: 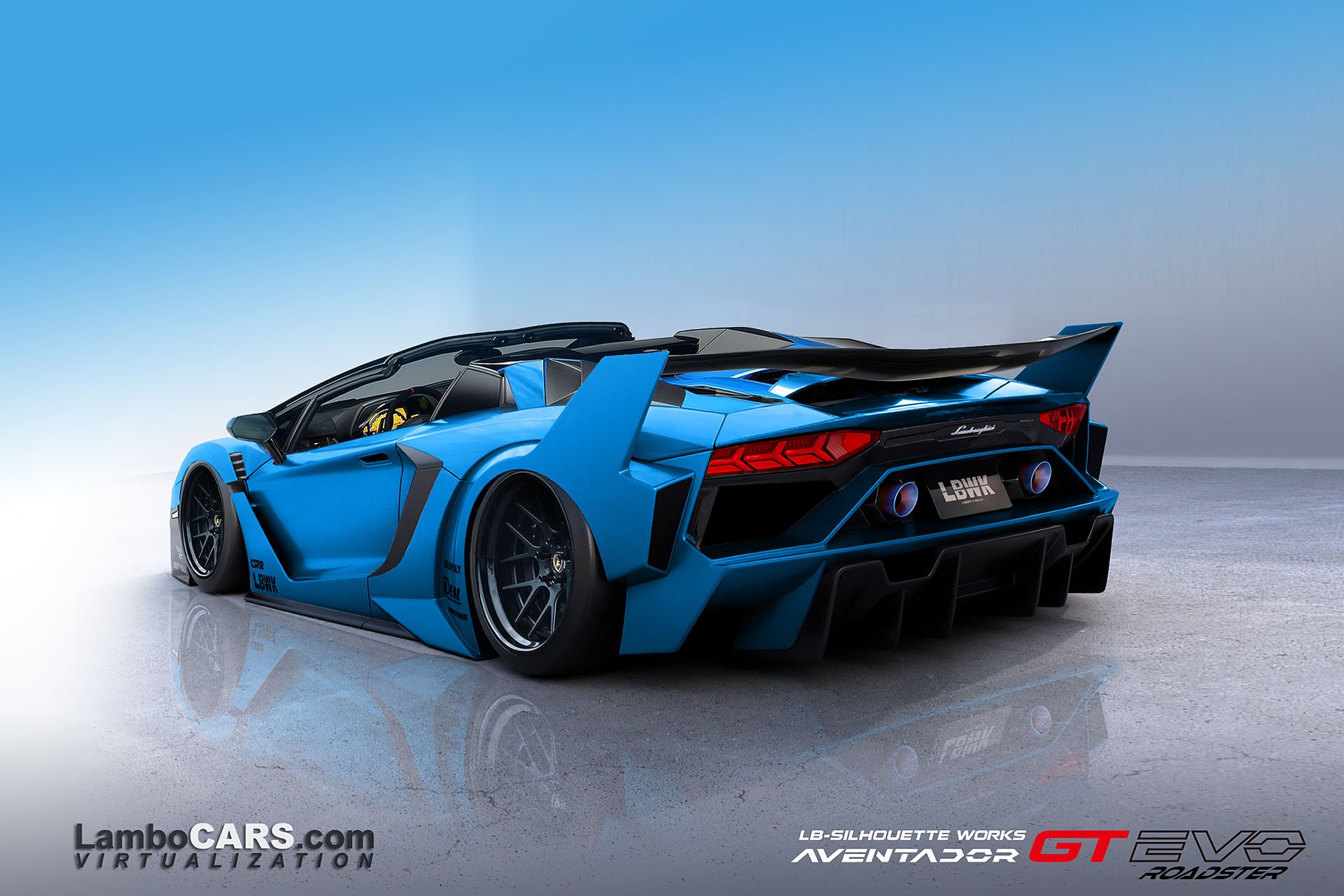