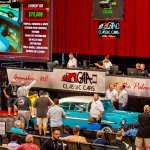 Featuring the No Reserve Collection consignment from the George Shinn collection, GAA Classic Cars reports that its July 24 summer auction sold more than 600 vehicles for $20 million with a 91 percent sell-through rate at its Automobile Palace in Greensboro, North Carolina.

After two record-setting sales in the spring and the success of the summer event, GAA has announced plans to expand its 5.5 acre facility in time for the fall auction in November.

GAA noted that among the No Reserve Collection from the former owner of the Charlotte Hornets professional basketball team were a 2013 Porsche 911 Carrera S, a 1970 Mercedes-Benz 280SL, and “several outstanding Ford Galaxies, (Chevrolet) Bel Airs, and Mustangs.”

The Shinn collection also donated a 1951 Ford Crown Victoria to former Olympic skater Scott Hamilton’s charity, The Scott Hamilton CARES Foundation for cancer research. The car sold for $55,000, and bidders at the auction donated another $60,000 in a collection for the charity, GAA said.

Among other sales, a custom 1958 Chevrolet Corvette resto-mod built by Jeff Hayes of American Speed Shop sold for $190,000 and is headed to Saudi Arabia, GAA said.