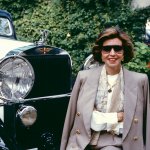 (Editor’s note: Perhaps starting with Emil Jellinek’s daughter, Mercedes, women and their names have inspired people building cars. Hispano Suiza shares the story of Carmen Mateu, granddaughter of the Spanish automaker’s founder, Damian Mateu, and the mother of the company’s current chairman, a role she held from 1972-2000. The historic automaker has been reborn with the introduction of the new Hispano Suiza Carmen.)

Hispano Suiza Carmen represents technological excellence, high performance and luxury raised to its maximum power. In short, it is the most advanced vehicle ever created in our country. A model of such depth had to bear the name of a key figure in the history of the brand: Carmen Mateu.

A tribute to the pursuit of dreams, to the infinite love for culture and art, and to the promotion of talent and our country within and outside our borders.

The rebirth of the Hispano Suiza brand bears the name of “Carmen,” a choice that was not merely coincidental, but quite the opposite: it is a name that perfectly embodies what the company and its products stand for. Carmen Mateu Quintana was born on February 21, 1936 in Barcelona.

She was the daughter of Miguel Mateu y Pla, who throughout his long and distinguished career was mayor of Barcelona, chairman of La Caixa bank and ambassador in Paris. Miguel, in turn, was the son of Damián Mateu, a successful businessman who in 1904 had founded Hispano Suiza with Marc Birkigt.

Carmen lived through the end of the first era of Hispano Suiza, a brand she was extremely fond of, and that revolutionized the incipient automobile industry in our country, building more than 12,000 luxury cars between 1904 and 1946.

The family also acquired the Peralada Castle (near Girona, Spain) in 1923: an imposing 14th-century construction, today it serves as the Peralada Group headquarters, headed by the Suqué Mateu family. Surrounded by immense gardens of almost 77,000 cubic meters, designed by the architect François Duvilliers, and flanked by two 14th-century towers, the Peralada Castle hosts a majestic collection of books, ceramics and works of art.

With such a heritage, it is not surprising that Carmen was infected with an indomitable passion for music, culture and art. She studied art and decoration, and she devoted herself to it throughout her life. In 1957 she married businessman Arturo Suqué, who eventually became chairman of the Peralada Group, the holding that controls all the companies controlled by the family, including Hispano Suiza.

Driven by their love for music and entertainment, Carmen and her husband launched the Peralada Festival in 1987, held since then in the surroundings of the Peralada Castle and which has become a national and international reference for ballet and classical music. The Peralada Summer nights  have been immersed in culture for over 30 years,  thanks to outstanding opera productions, symphonic concerts, ballet, jazz and pop concerts that led the Peralada Festival to become a member of the European Festivals Association in 1992 and later of Opera Europe in 2010.

Artists such as Plácido Domingo, Josep Carreras and many others have all performed on the Peralada Castle stage. Among the operas represented on the Peralada stage are Turandot and La Bohème, by Giacomo Puccini, Giuseppe Verdi´s La Traviata, and Don Giovanni, by Mozart. This summer the Peralada Festival celebrates its 35th season.

Carmen Mateu established herself throughout her life as a promoter of the musical arts, thus continuing the family legacy. Thanks to the love and passion for all the forms of art that her father had instilled in her from her early years, she really put Peralada =- a small village of 1,800 inhabitants —  on the map and converted it into an international point of artistic reference.

“My father left us a legacy: Peralada,” she said in an interview. “He liked music and this is a town of musical culture. He used to tell me: You have to do something! You have the place and the space, you have to dedicate it to whoever can enjoy it and reinvest in culture,”  so this is how the Festival was born.

When he passed away in 2018, the 32nd edition of the Peralada Festival dedicated in his honor a performance of Verdi’s Requiem, by the Barcelona Symphony Orchestra and the National Orchestra of Catalonia. Throughout her life, Carmen Mateu received numerous awards, including the Gold Medal of the Cercle del Liceu, the Cruz de Sant Jordi or the Gold Medal of Merit for Fine Arts.

The figure of Carmen is still very present in the new era of Hispano Suiza. She and her husband were in charge of transmitting the family values to their three children — Miguel, Isabel and Javier. Just as Carmen wanted to turn Peralada into an international point of reference, where the best artists performed and the best works where shown, today it is Hispano Suiza which elevates luxury, performance and excellence to a higher level, with the aim to entice car lovers and collectors all over the world.

Carmen Mateu, like the rest of the family, maintained the incessant desire to bring Hispano Suiza back to life. She was chairman of the company between 1972 — after the death of her father, Miquel Mateu y Pla — and 2000, when she handed over the presidency to her son, Miguel Suqué Mateu.

Almost two decades later, a new Hispano Suiza was born to take the automobile industry by storm, featuring new technologies and producing the most advanced vehicles in the world.

“Hispano Suiza is the only brand that is still in the hands of a family today,” Miguel Suque Mateu notes. “For four generations we have preserved the Hispano Suiza brand, which is closely linked with the Suqué Mateu family.

“The name Carmen is a tribute to our mother. When we were debating what we should name the vehicle, we thought about Carmen and the family loved it. She always told me that she wanted to see a Hispano Suiza on the streets again, and I am sure that now she will be proud of it. The signature on the back of the vehicle is her original signature. “

In March 2019, the new vehicle that brought the brand back to life was launched at the Geneva Motor Show: the Hispano Suiza Carmen, an electric hypercar delivering 1,019 horsepower, was designed, developed and manufactured in Barcelona. and only 19 units will be produced. Five of them will be in its most extreme version, called Carmen Boulogne, which raises its power to 1,114 horsepower.

It is a worthy tribute to the figure of a woman who put all her efforts to uphold the family’s legacy, with elegance and honor, and who fulfilled the dream of sharing her passion with the rest of the world.