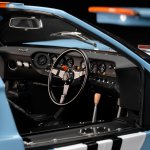 The photo above is not the interior of the Ford GT40 that Jacky Ickx and Jackie Oliver drove to victory in the 24 Hours of Le Mans in 1969. Instead, we’re featuring it to show the detail of the latest model from the Amalgam Collection, a 1:8 scale version of the car.

The British model-making company says it will produce only 199 examples of the GT40, each nearly 20 inches in length and based on the Gulf-liveried chassis 1075, after two years “of deep research and intense development work, with the assistance and cooperation of the Ford Archive and Heritage department, and Gulf Oil International.”

“This model will be one of the most deeply researched and finely detailed models we have ever created,” Amalgam founder Sandy Copeman is quoted in the company’s news release. “We have not spared any expense in our efforts to make this model absolutely authentic and superbly detailed in every way.

“The real car has undergone numerous alterations and modifications over the years, so we have dug deep into photo archives and records, to ensure that our model exactly replicates the car on the day it won at Le Mans in 1969.”

Not only did Ickx and Oliver take the car to victory at Le Mans in 1969, but Pedro Rodriguez and Lucien Bianchi drove it to victory in the 24 hours race in 1968 as well.

The model is priced at $13,059, and Amalgam reports it already has orders for the first 50 examples.