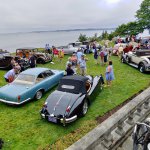 The Misselwood Concours d’Elegance is a concours with a mission. Now in its 11th year on the campus of Endicott College in Beverly, Massachusetts, all monies raised by the event are used to help the school’s students with financial need.

In fact, the concours was started more than a decade ago by a car-crazy student at the school, one Patrick Cornelissen.

The setting for the concours is the oceanfront grounds of the Misselwood Estate on Boston’s North Shore. It is a wonderful and scenic location.

The 2021 concours celebrated British cars and there were scores of them from Jaguar, Bentley, Rolls-Royce, Allard, Aston Martin, and even a Gordon Keeble, which is the first one I have seen in person.

Also featured was a woodie class which included a couple of absolutely stunning cars, a Ford Marmon Harrington 4X4 from the Maine Classic Car Museum and the most incredible Rolls Royce Shooting Brake woodie I have ever seen.

Other classes ran the gamut from Microcars and Muscle cars, Pre-War Full classics, motorcycles, and lots of post-war sports cars.

By shows end, the Best of Show winner was announced as a spectacular 1914 Rolls-Royce Silver Ghost. This car is something quite special in that it is the car that in 1914 was driven by James Radley in the Alpine Trials, where it won. This historic car was stunning and came out despite the rain in the early hours.

According to the story of this car, Radley said after winning the Rally,”We must have a bottle to christen her. ‘Here John, just fetch a bottle of The Widow will you?’ And there outside Brown’s, I was duly christened, and a glass of champagne was poured into the cars radiator.”

To celebrate the concours victory, car owner Steve Littin had a bottle of champagne fetched and did the same.

The Misselwood concours is a wonderful event and the concours we all think of as the friendly concours. For entrants the event includes a Friday party, a Saturday tour, a delicious Saturday dinner, and of course the concours on Sunday.

This is a perfect first concours to attend.