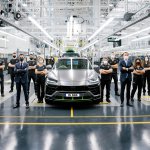 The purists may still decry Lamborghini’s decision to launch the Urus, but the market loves it and has shown this affection by generating record sales for the crossover.

Lamborghini on Tuesday confirmed it has built its 15,000th Urus. Destined for the United Kingdom, the particular example features a shade of Grigio Keres Matte paint with Verde Scandal accents. The interior combines Nero Ade and Verde Scandal.

The milestone figure was reached in just three years, which is a new record for a Lamborghini. The older Huracan is still the best-selling Lamborghini of all time, but we will likely see the Urus move into that position within a year.

The Urus was launched on the market in early 2018 and in that first year already managed to become the most popular model in the lineup on an annual basis. It’s clear to see why. The Urus appeals to a much wider audience than Lamborghini’s traditional supercars, with 70% of the initial buyers—possibly more today—new to the brand.

To keep the momentum going, Lamborghini is preparing a mid-cycle update for the Urus. Expected to be introduced late this year or early next, the update will bring minor styling changes, new tech features in the cabin, and possibly the option of a hybrid powertrain. The Urus currently comes exclusively with a 4.0-liter twin-turbocharged V-8 that delivers 641 hp. It’s enough for 0-60 mph acceleration in about 3.5 seconds and a top speed of 189 mph.