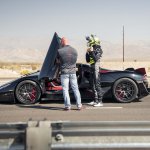 On Thursday, SSC formally admitted in an Instagram post that its Tuatara hypercar never reached the claimed speeds of 331 mph or even 301 mph in October 2020 despite originally claiming otherwise.

“We have seen your questions for months now and understand your frustrations,” SSC’s post said, “If it hasn’t been made clear up to this point, we would like to acknowledge officially that we did not reach the originally claimed speeds of 331 MPH or even 301 MPH in October of 2020.”

In October 2020, SSC claimed a Tuatara owned by Dr. Larry Caplin and driven by race car driver Oliver Webb set a new production-vehicle land-speed record of 316.11 mph. The claimed record was a two-way average of 301.07 mph and 331.15 mph. Those speeds weren’t achieved.

Questions emerged about the speeds and validation of the data. CEO Jerod Shelby noted doubts about the data, though never admitted the car failed to hit the claimed speeds.

In December, the Tuatara made another attempt at the speed record, which was 277.9 mph set by the Koenigsegg Agera RS in 2017, but the car experienced mechanical issues that ended the attempt without breaking the record.

The Tuatara was crowned the new speed king on Jan. 17 as it set a land-speed record for production cars at 282.9 mph. The record was set over the course of 2.3 miles at Jonny Bohnmer Grounds at Space Florida’s LLF, Kennedy Space Center with Caplin behind the wheel. A two-way average of 282.9 mph was set with runs of 279.7 mph and 286.1 mph.

SSC said it continues an ongoing effort to break the 300 mph barrier with another record attempt in the planning stages.