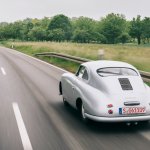 With Porsche planning a return to Le Mans in 2023 in partnership with Penske Racing, the German sports car producer is creating a 6-episode video series on its history in the famed 24-hour race.

“The Porsche success story in Le Mans” has launched with Episode 1.

“The starting point is 1951, the year in which Porsche first drove to a class victory with the 356 SL,” the company said in announcing the series.

“A further 107 class and 19 overall victories followed the triumph with the light alloy coupé.

“70 years later, Porsche is launching Porsche Moments, a new series that devotes six episodes to this famous chapter. The team pays tribute to the many historically significant moments in Le Mans through the media, internationally and at the headquarters in Zuffenhausen.

“In the new Porsche Moments format, we will be highlighting special moments in our past during which we – from today’s point of view – have made corporate, product or racing history,” Achim Stejskal, head of Porsche Heritage and the Porsche Museum, is quoted.

“We reconstruct these moments as authentically as possible by means of contemporary witnesses and invite our fans to again experience these special Porsche Moments via our social media channels.”

In the first episode, Le Mans winner Tim Bernhard joins Fritz Enzinger, Porsche vice president of motorsport, who led the brand to three of its Le Mans overall victories, as they begin their exploration in a 356 SL.

“SL stands for Super Light,” Porsche notes. “Thanks to its aluminum body, the coupé weighs only 680 kilograms (1,499 pounds), almost 120 kilograms less than the steel-bodied 356 Coupés produced by Reutter in Stuttgart from November 1949.

“Wilhelm Hild from the Porsche works team gave the 356 SL the nickname of ‘aluminum can’,” Enzinger says with a laugh.

The car featured in the first episode of Porsche Moments is the historical godfather of the class winner and was made in 1952 – one year later than the original No. 46 Le Mans-winning car. Porsche reports that in 1948 it produced 44 Type 356/2 Coupés in Gmünd, in Austria’s Carinthia region.

The winning car was driven by French importer Auguste Veuillet and his compatriot Edmond Mouche.

“These days it is inconceivable to drive competition cars by road to Le Mans,” Bernhard says of what in 1951 was an 11-hour trip.

“Departure was at 7:15 in the morning, Ferry Porsche sent off the team,” Enzinger notes as he shows historical photos and entries about this moment in the journal of then chief designer, Karl Rabe.

“Racing driver Veuillet and Charles Faroux race director of the 24 Hours of Le Mans had managed to convince Ferdinand and Ferry Porsche to participate in Le Mans at the Paris Motor Show the year before,” Porsche reveals in the video.