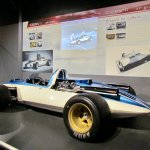 Back in the spring of 2019, as Chevrolet was preparing to unveil its 8th-generation but first mid-engine production Corvette, we shared a story about the earlier efforts to produce a version of America’s sports car with its engine behind instead of in front of the cockpit.

Those efforts began in 1953 soon after the Corvette was unveiled as a concept car at GM’s Motorama showcase.

It was fun to do the research for that article, but it was more meaningful to actually see those vehicles in their full-size, 3-dimensional glory during a recent visit to the National Corvette Museum in Bowling Green, Kentucky.

On display in the museum’s “design and engineering” hall is an exhibit called “The Vision Realized.” It includes half-a-dozen proposals for mid-engine Corvettes, from Zora Arkus-Duntov’s original 1959 XP-708, better known as the CERV 1, to the 1986 Indy, which took its name from the twin-turbocharged Ilmor Indy V8 that supplied its power.

Corvette delivery, and a marriage as well

A week ago, our car museum news roundup included a report on the 14,000th Corvette delivery at the National Corvette Museum.

Although their Corvette delivery may not have had a milestone number, Ralph and Jennifer Boles not only picked up their 2021 Arctic White convertible this month, they got married while doing so.

According to the museum’s announcement, the couple planned to be married in 2020 but postponed the ceremony because of the coronavirus pandemic. But when Ralph ordered what would be his third Corvette purchase, Jennifer suggested, “it would be fun to get married while we are there.”

Turns out the museum has a wedding package, so at 11 a.m. on July 15, the couple said the “I do’s,” had a small wedding reception and then drove off to Florida in their new car.

USA Today recently reported its list of the best attractions for car lovers, 2021 edition. Candidates nominated by a “panel of experts” included museums, factory tours, behind-the-wheel driving experiences and live auctions. The final rankings were based on a popular vote.

Here are the ratings:

The Auburn Cord Duesenberg Automobile Museum in northeast Indiana has loaned the 1930 Cord L-29 formerly owned by Frank Lloyd Wright to the Eric County (Pennsylvania) Historical Societ – Hagen History Center for an exhibit on the architect and his work.

The exhibit features the architect’s original San Francisco office used from 1951 until Wright’s death in 1959. Many furnishings are made from redwood plywood.

Also featured is a 17-foot model of Wright’s “Butterfly Bridge,” proposal for San Francisco Bay. Though never built, the model was featured in the movie Die Hard.

The car will be on display in Pennsylvania through October.

The Canadian Automotive Museum in Oshawa, Ontario, has re-opened to visitors. The museum staff spent the past seven months of the pandemic shutdown adding new interpretive panels, new lighting, outdoor murals and putting the 1914 Brockville Atlas back on display for the first time in 25 years.

The British Motor Museum at Gaydon has opened a new exhibit, “Factor Us In,” that focuses on the history of the British auto industry in the West Midlands region, particularly on Canley in Coventry, Longbridge  in Birmingham, and Lode Lane, Solihull, respective homes of such vehicles as the Triumph Stag, the Triumph TR-7, and the Land Rover.

The museum also has announced an agreement with MG Motor UK in which Lord Austin’s office will be preserved by moving it from a storage facility to the museum for display, with a debut of the exhibit planned for later this year.

The Owls Head Transportation Museum in Maine hosts a two-day Truck & Tractor Show on July 24-25 from 10 a.m. until 3 p.m. each day. The Maine Professional Drivers Association will be doing blind-spot demonstrations and there will be aircraft demonstrations both days as well. Several vintage truck and farm tractor clubs will be showing their vehicles.

Stahl’s Auto Collection in Michigan stages its Autos for Autism event July 22 with Wayne Carini among the featured guests and with a tour of Jay Leno’s garage as a prize.

On July 23 it’s Princesses On Parade and a Fairytale Brunch at the Gilmore Car Museum in Hickory Corners, Michigan. the event runs from 9:30 a.m. until 3 p.m.

Demo Day at the Simeone Foundation Automotive Museum in Philadelphia focuses on “The European Rally: Time, Speed, Distance” on July 24. Cars scheduled to be exercised in the museum’s parking lot include the 1938 Jaguar 3.5-liter SS 100, 1948 Talbot-Lago T26 Grand Sport coupe, and 1954 Austin-Healey 100-4 BN1.

Big weekend at the Petersen Automotive Museum in Los Angeles. On July 24, the museum opens its first exhibit devoted to Formula One racing. “Pole Position: The Juan Gonzalez Formula 1 Collection” will feature 10 significant F1 vehicles from the collection of McLaren team sponsor Juan Gonzalez and his Mission Foods company. Cars range from a 1987 Lotus 99T to a 2018 McLaren MCL33.

On July 25, the Petersen hosts Bruce Meyer’s All-American Cruise-In on July 25, and this year the annual event from 9:30 a.m. until 12:30 p.m. also will be a celebration of the recent 100th birthday of hot-rod icon Ed “Isky” Iskenderian. “Isky” is scheduled to take part in a panel discussion that also will include Don Prudhomme, Alex Xydias, Ed Pink, Tommy Ivo, Don Prieto, Joe Schubeck and  Meyer.

It’s “Simply Japanese” on July 25 at the National Motor Museum in Beaulieu, UK, where cars from Japanese automakers will gather for a show. Inside the museum, a very early 1935 Datsun Type 14 sedan will be on display.

The Brooklands Museum in England reopens July 26 with a next exhibit, “Driven by Design,” exploring the design of supercars. The exhibit is presented in collaboration with McLaren Automotive as it celebrates its 10th anniversary.

The inaugural North East Motor Sports Museum rally-tour Around the Lake is scheduled for July 31. The event begins at the museum in Loudon, New Hampshire, and will take scenic roads to the Vintage Racing Stables car collection in Sanbornton. The event is limited to 1972 or earlier vehicles.

Autobooks-Aerobooks in Burbank, California, hosts author Todd Zuercher and his book, Ford Bronco: A History of Ford’s Legendary 4×4, from 10 a.m. until 2 p.m. on July 31.

The Mustang Owner’s Museum in Concord, North Carolina, is organizing a road trip to the Woodward Dream Cruise in the northern Detroit suburbs. Cars will gather in Dayton, Ohio, on August 17, visit the Gale Halderman Museum, and then head to Dearborn, Michigan.

With so many events canceled during 2020, the British Motor Museum at Gaydon will turn the Gaydon Land Rover Show scheduled for July 31-August 1 into the 50th-plus-one anniversary for the off-road automaker. “We’re looking forward to having a belated birthday celebration,” said show manager Tom Caren.

It’s “Simply Audi” on August 1 at the National Motor Museum in Beaulieu, England.

It’s Supercar Weekend August 7-8 at the National Motor Museum at Beaulieu, England, where more than 900 of the world’s highest-performance vehicles are set for show, for demonstration runs and for “sound-off” competition.

The National Motor Museum at Beaulieu, England, celebrates the life of “the voice of Formula 1,” broadcaster Murray Walker, on August 14 with an evening event that features iconic 2- and 4-wheel racing vehicles.

It’s AutoFest 2021 on August 22 at the Newport Car Museum in Rhode Island, where the Mass Cruisers Auto Club (that’s Mass as in Massachusetts) stages a showcase featuring more than 500 vehicles.

It’s “Simply Mercedes” with a showcase for Mercedes-Benz vehicles August 22 at the National Motor Museum in Beaulieu, England.

The annual Saratoga Motorcar Auction at the Saratoga Automobile Museum in upstate New York is scheduled for September 24-25.

The AACA Museum in Hershey, Pennsylvania, resumes its annual “Night at the Museum” fundraiser on October 6 with a theme of “Cars and Country Music.” Troy Engle and Southern Skies will perform at an event that also will be the kickoff to “Fall Hershey.”

Herzog Motorsports, the Missouri-based racing team that has won in a variety of events, from off-road racing in Baja to Jimmie Johnson’s transition to stock car racing, will be honored October 15-16 in a special event at the Speedway Motorsports Museum of American Speed in Lincoln, Nebraska.