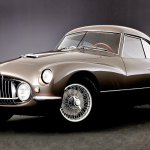 RM Sotheby’s has announced a new “boutique” collector car auction to be held in September in the Swiss mountain resort of St. Moritz during the Bernina Gran Turismo week of vintage racing events.

The auction is scheduled for September 17 at the famous Kempinski Grand Hotel des Bains.

The Bernina Gran Turismo, re-launched in 2014, encompasses a dramatic and scenic hill climb on a closed public road that winds for 5.7 kilometers (3.5 miles) with more than 50 curves and an altitude rise of 450 meters (1,476 feet) to the top of Bernina Pass.

Historic racers from around the globe participate in the hill climb, with thousands of spectators taking in the scene.

“To launch the sale in association with the Bernina Gran Turismo is obviously fantastic for us,” Oliver Camelin, RM Sotheby’s director of sales, Switzerland, said in the auction announcement. “The event has become very important with annual events calendar for historic vehicles, and our boutique sale is a perfect fit with the prestigious nature of the event.”

Four terrific sports cars have been consigned to the auction thus far.  The rarest is a 1953 Fiat 8V coupe, one of the first of 34 Series 1 cars with bodywork by the Italian automaker’s Reparto Carrozzerie Speciali department. Fully restored and with matching numbers, the 8V has an estimated value, in Swiss francs, of CHF1.3 million) to CHF1.6 million (($1.41 million to $1.74 million).