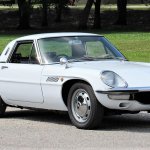 A limited-production Japanese sports car with a Wankel rotary engine, the Mazda Cosmo was quite the unicorn when it came out in 1966, serving as a halo car for a company that had produced its first passenger car, the tiny R360, just six years earlier.

The Pick of the Day is a 1970 Mazda Cosmo 110S, which designates an export model, although this coupe apparently never left Japan until being purchased by the previous owner in 2014 and brought to the US. Like all Cosmos, it has its steering wheel on the right side.

Mazda by this time was known for its cars with rotary engines, the rights to which the automaker had purchased from NSU of Germany.  The compact, high-revving rotaries were admired for producing impressive horsepower for their size, and the 110S badging on the Cosmo signified the 110 horsepower coming from its 982cc twin-rotor engine. That, and the car’s ability to reach 110 mph.

Over its entire production run from 1966 through 1972, just 1,519 Cosmos were produced; they were never officially sold in the United States and continue to be rare here.  The Cosmo 110S version is even rarer, differing from other models as it combines features of the Series I and Series II cars.

The styling of the Cosmos has always been controversial. Critics see an amalgam of awkward proportions and trendy design cues from other models – such as the BMW-style fender trim – that don’t quite fit together.  Others see a unique and historic design that is both beautiful and distinctive, and quite beloved.

This Cosmo is described by the Sarasota, Florida, dealer advertising the car on ClassicCars.com, as s survivor driven just 51,000 miles.

“On offer is a fine, mostly original Cosmo with cosmetic and major mechanical improvements recently performed on a very rare 110S export model that comes from the large private collection of a JDM enthusiast,” the dealer says, referring to the fan initials for Japanese Domestic Market.

“This example was purchased in great, survivor condition. The body was recently treated to a complete bare-metal repaint in correct Swan White over newly reupholstered seats with proper houndstooth seat pattern. The maroon carpet is original to this car. Exterior chrome was also sent out and rechromed. New tires were added.

“Most importantly, the original 110 motor has been resealed and completely rebuilt by a longtime Mazda rotary tech and tuner. The motor compartment benefits from a detail as the motor was out for rebuilding.”

In the realm of collector cars, the Cosmo ranks in the top tier of JDMs, along with the Toyota 2000GT and the Nissan Skyline GT-R. although never quite reaching the lofty values of those two favorites.