Now that the 2021 Audi RS3 is here, there are naturally enthusiasts wanting to know when they can buy one and how much it will cost. While pricing for most markets hasn’t been released yet, it has been released for the UK market.

The Audi RS3 will start at £50,900 in the UK, beginning in August of this year. Lucky of UK market Audi enthusiasts, as us Yanks have to wait until the beginning of 2022 to get our RS3s.

When customers take delivery of their RS3s, they’re going to be getting one of the most exciting new Audis in a long time. Under the hood lies a familiar 2.5 liter turbocharged five-cylinder, with 394 horsepower (401 horsepower for the US market) and 369 lb-ft of torque. According to Audi, it can get from 0-60 mph in 3.8 seconds.

Though, there’s more to the Audi RS3 than just its engine. Its new RS Torque Splitter rear differential not only allows it to put more power to its rear wheels but it also allows for a drift mode. Apparently, the new RS3 can send up to 100 percent of its power to just a single rear wheel, the outside wheel, thus allowing it to drift like a rear-wheel drive car. There’s also a driving mode that’s supposed to be for track driving that’s said to eliminate both understeer and oversteer, creating the fastest lap times possible. 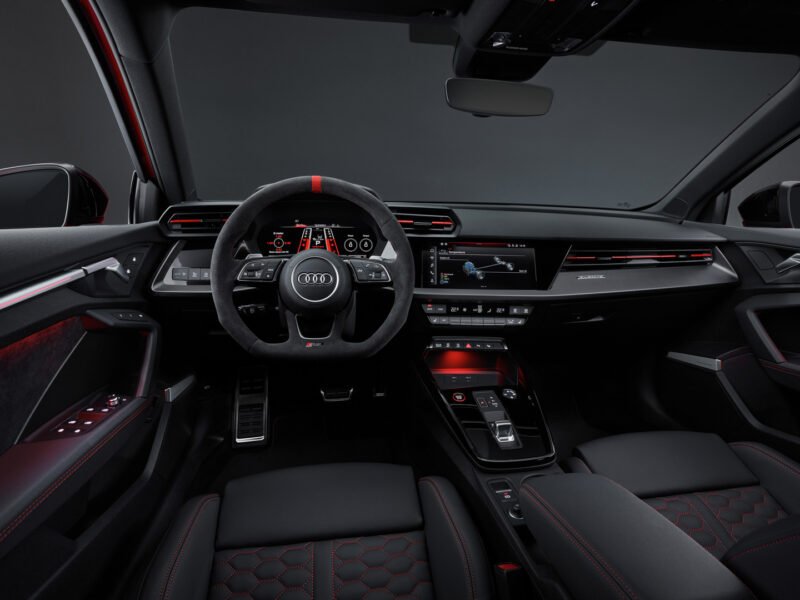 It also gets a revised variable power steering system, lowered suspension, more negative front camber at the front than the rear, and more power lower in the rev range. So it should be a more exciting, sharper, and more engaging car to drive than any other RS3 before it.

We don’t know what the pricing will be in the U.S. but we’re expecting to cost just under $60,000. Being that this is likely going to be the last gas-powered RS3 ever made, it’s not going to be one to miss.