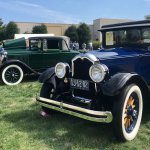 The Antique Automobile Club of America stages its “grandest event” and showcases its “best cars” this week at its annual Grand Nationals Car Show, set for July 23-24 at New Ulm, Minnesota, where the Minnesota Region AACA will be host.

In addition, 18 vehicles will vie for the Zenith Award as the restoration of the year.

Zenith judging and awards presentations will run from 10 a.m. until 5 p.m. July 23 at the New Ulm Civic Center.

1914 Rolls is Best of Show in South Bend

A 1914 Rolls-Royce Silver Ghost owned by Steven Haines of Niles, Michigan, was selected as Best of Show at the 2021 Concours d’Elegance at Copshaholm in South Bend, Indiana. Haines’ car also won best of class in the “Kickin’ Brass” class.

Among other awards, the “Burt Levy Digs This Car Award,” given by the concours’ visiting author and special guest, went to a 1957 Tanner T6 owned by Charles Hayes of South Bend.

People’s Choice was a 1954 Kaiser Darrin owned by Gilbert and Rosemary Chestney of Chelsa, Michigan, and the Hagerty Junior Judging Award went to a 1957 Chevrolet Corvette owned by Wyn Laidig of Mishawaka, Indiana.

A 1937 Horch 853 Sport cabriolet owned by Valerie and Aaron Weiss of San Marino, California, won Best of Show honors this past weekend at the 65th annual Hillsborough Concours d’Elegance in Burlingame, California.

The car previously had won best in class honors at Pebble Beach and an award for elegance at Amelia Island.

A special feature of the Concours d’Elegance of America is the “Jet Age” class. Jet Age convertibles, station wagons and pickup trucks have been featured. This year it’s “Jet Age ‘60s Styling” that will be on display July 25 at the Inn at St. John’s in Plymouth, Michigan.

The location for Luftgekühlt 7, the celebration of air-cooled Porsche vehicles, has been revealed. We knew it would be held in Indianapolis, but the precise location is a 1920s Art Deco structure that formerly was the largest Coca-Cola bottling plant in the world.

The plant is located at 850 Massachusetts Avenue in the Bottleworks District northeast of downtown Indianapolis. The Porsche event is scheduled for September 10.

The car show is open to air-cooled Porsches (1948-1998) and to period-built coachbuilds powered by Porsche engines.

The 2021 Chattanooga Motorcar Festival, scheduled for October 15-17, will feature a new event this fall, the inaugural Legendary Charity Cruise-In, set for 5 a.m. until 3 p.m. on October 16. The cruise-in car show will be held near the location of the new Pace Grand Prix at the Bend race course.

“We’re absolutely thrilled to welcome the inaugural Legendary Charity Cruise-In as one of our special events at the Chattanooga Motorcar Festival,” event chairman Ken Gross was quoted in the announcement. “It provides car collectors a chance to showcase their favorite cars, and it lets the fans get up close and personal with some very unique vehicles.”

The cruise-in site can accommodate as many as 400 cars, with the $100 entry fee benefiting the Fifth Plus Foundation which supports the CHI Memorial Stroke and Neuroscience Center and NeuroScience Innovation Foundation in their work to combat Alzheimer’s Disease.

50 Years of the 1971, the 25th anniversary of the Grand Sport, and Solid Axle Corvettes (with the Solie Axle Corvette Club National convention) are among the special groupings planned for display August 26-28 at the Corvettes at Carlisle gathering in Pennsylvania. Also to be featured are the Callaway AeroBody Corvette.

The Chip’s Choice feature will be a salute to law enforcement with a dozen Corvettes “owned, driven, shown or otherwise cared for by members of the law enforcement community,” according to Carlisle Events.

“In addition, there will be an on-site law enforcement parade, a stage presentation which welcomes not only Corvette enthusiasts in law enforcement, but local officers from the surrounding counties and of course the Chip’s Choice cars.”

The Goodguys Rod & Custom Association have unveiled a 1986 Chevrolet C-10 built by Goolsby Customers that will be the prize for a year-old promotion that will run through the 2022 Summit Racing Nationals in Columbus, Ohio.

The vintage Chevy pickup was done by Goolsby with a Chevrolet Performance LT1 crate engine from Pace Performance, a Gearstar 4L65E transmission and also has a custom BASF paint job.

The official centennial of Route 66 is scheduled for 2026, but a preview of that celebration will be offered at the Illinois State Fair which opens August 12.

According to Route66News, The first phase of the Illinois Route 66 Experience “will offer visitors a chance to walk Illinois Route 66 from Chicago to the Chain of Rocks Bridge and learn about communities and attractions along the Route in microform.”

Following the state fair, “The experience will be open year-round and will offer QR codes and storyboards that will detail historical attractions and businesses along the Route,” according to an event news release.

The display is at the Illinois State Fairgrounds Gate 2.

“Communities along Illinois Route 66 have been invited to participate and will do so by working with the Illinois Route 66 Scenic Byway to develop their perspective area within the experience,” the news release noted.

“Restoration — Art or Science?” is the subject of a panel discussion July 24 to be staged by the Retromobil Club of Romania and the Federation Internationale des Vehicules Anciens. The event will be streamed on the FIVA Facebook page starting at 8 a.m. (Central European Time, which is 2 a.m. Eastern in the US).

Speakers scheduled include David Cooper (US), Corrado Lopresto (Italy), and Michel Lamourex (Canada), among others. Subjets to be covered include “practices, experiences and traditions, a dialogue essential for saving and maintaining the motoring heritage.”

The link between fine automobiles and designer timepieces gets an official nod September 1-5 when Britain’s Salon Privé adds a special watchmakers showcase to the South Lawn of Blenheim Palace.

“With a shared passion for precision engineering and style, it’s little wonder that the automotive industry has enjoyed a long and close association with the finest watchmakers – especially in the world of motorsport, where every fraction of a second counts and accurate timekeeping is essential,” event officials said in their announcement.

“In 2021, Salon Privé will be celebrating that relationship by bringing together the world’s leading horologists for a very special showcase – Salon Privé TIME. They will be displaying their latest releases in a pavilion on the South Lawn of Blenheim Palace, where they will line up next to some of the greatest automotive and luxury brands. Guests will have the opportunity to browse, try on and purchase all the magnificent pieces on display.”

Organizers say Blenheim Palace is a fitting home for such a display.

“The fourth Duke of Marlborough, George Spencer, was fascinated by astrology and all things mechanical. During the 17th century, using a sundial and the specific latitude of the Palace, he established ‘Blenheim time‘ to be five and a half minutes slower than Greenwich Mean Time. Today, its 30 antique clocks are maintained by official timekeeper Julian Newman, and the timepiece that looks over the East Courtyard has done so since 1710.”

Have an event to add? Email details to journal@classiccars.com