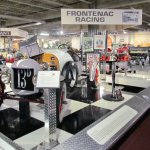 In the early 1940s, a policeman showed up at the Smith family home in Lincoln, Nebraska, with 12-year-old D. William Smith in tow. Like other youngsters, he had used an old gas-powered Maytag washing machine engine to power a go-kart. Problem was, he’d been driving it down one of the town’s main streets.

From an early age, D. William Smith, to become better known as “Speedy” Bill, had a need for speed. He tinkered with cars, raced them and motorcycles as well, yet went to Nebraska Wesleyan University and graduated with a degree in education.

But instead of teaching, he borrowed $300 from his fiancé, Joyce — who later would insist that he never officially repaid that loan — and opened a speed shop called Speedway Motors in a 20×20-foot building on Lincoln’s main street, US Route 6/O Street.

Fast forward a few decades and the Smiths with their four sons grew Speedway Motors into a major supplier of automotive speed equipment that occupies a half-million square-foot warehouse and headquarters on a 46-acre Lincoln campus just off O Street that since 1992 has included the Speedway Motors Museum of American Speed.

The museum is a separate building just across the parking lot that fills three stores while preserving race cars, engines and historic performance accessories. For example, there’s a large area devoted to Henry Ford’s Model T, and to the parts from Frontenac, Rajo, Riley, Roof and others that, shall we say, accelerated the car’s capabilities.

Ditto the Flathead Ford V8, with one wall covered by every cylinder head ever created to enhance that engine’s performance, including some experimental models that Ford sold to the museum by mistake and then asked for their return, which Speedway Motors politely declined.

But it’s not all just race cars and engines. The museum has one of the world’s largest collections of pedal cars, a couple of walls covered by the metal lunch boxes that kids carried to school in the second half of the 20th century, and a wall devoted to Buck Rogers.

Buck Rogers in a car museum? Museum tour guide Jeff Most (tours are offered at 1 p.m. weekdays) explained that Bill Smith had become a fan of the sci-fi character and early space adventurer while recuperating from Perthes disease, a relatively rare condition that impacts the hip or hips of some children, including Bill Smith, future international motorsports star Bruce McLaren, and me.

I’d heard about the vast collection of the Museum of American Speed, and especially about its collection of racing engines, but until I visited recently, I had no idea about just how impressive the collection and its display might be.

The museum is located at 599 Oakcreek Drive, just off West O Street and Interstate 80, and near the state capitol and university. It is open Monday through Saturday in summer months but only Mondays, Fridays and Saturdays from October to April. It is closed on major holidays.